After meeting Pope Francis and Sistani 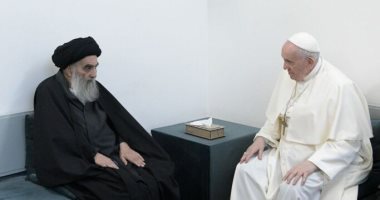 Mustafa Al-Kazemi, the Iraqi Prime Minister, confirmed that March 6 of every year has been set as a national day for tolerance and coexistence in Iraq, "after the historic meeting between the poles of peace and tolerance, Pope Francis, Pope of the Vatican, and the Supreme Reference, Mr. Ali Al-Sistani, today, Saturday," In the historical city of Ur.
Al-Kazemi wrote, in his tweet on his Twitter account: “On the occasion of the historic meeting between the poles of peace and tolerance, His Eminence the Supreme Leader Ali al-Sistani, His Holiness Pope Francis, and the meeting of religions in the historic city of Ur, we announce the designation of the sixth of March every year as a national day. Tolerance and Coexistence in Iraq. "
Pope Francis held a meeting with the supreme religious authority of the Shiites of Iraq, Grand Ayatollah Ali al-Sistani, in southern Iraq today, Saturday, in the first meeting of its kind between the head of the Catholic Church and the supreme authority of the Shiites, and al-Sistani received the Pope at his home in Najaf, the headquarters of the Shiite authority in Iraq in Iraq. The second day of the papal historic visit in the country. 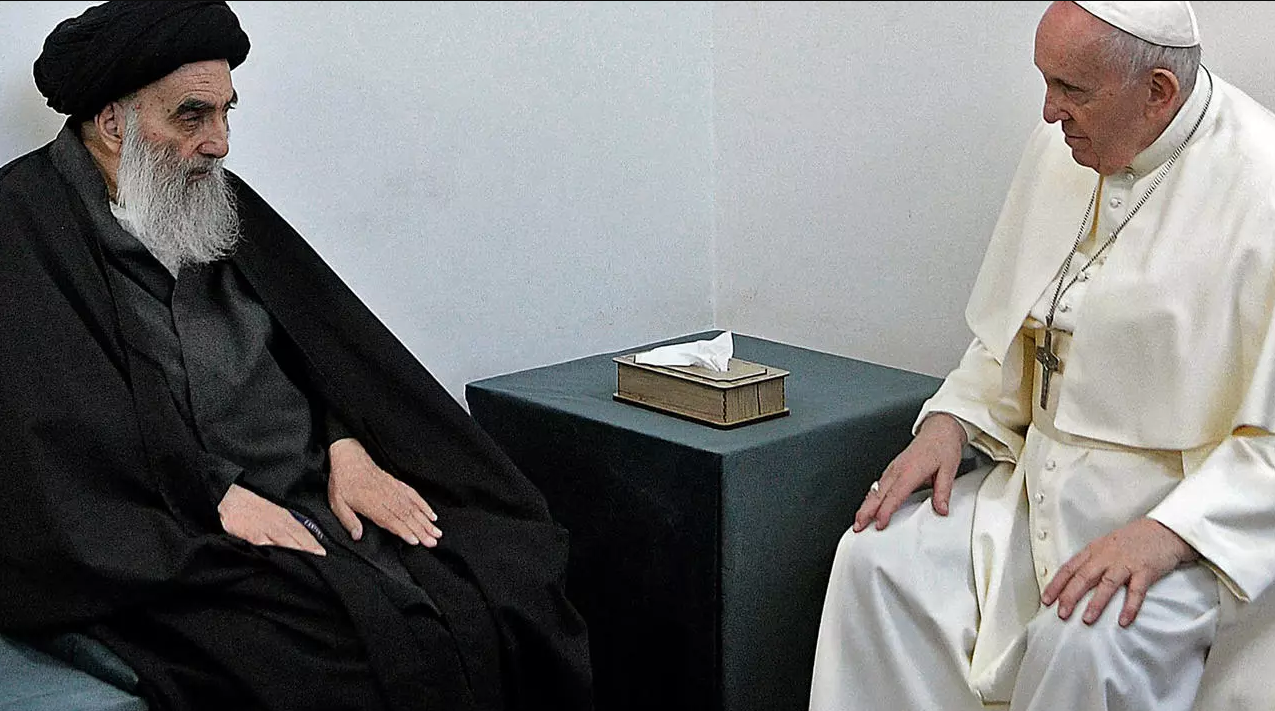 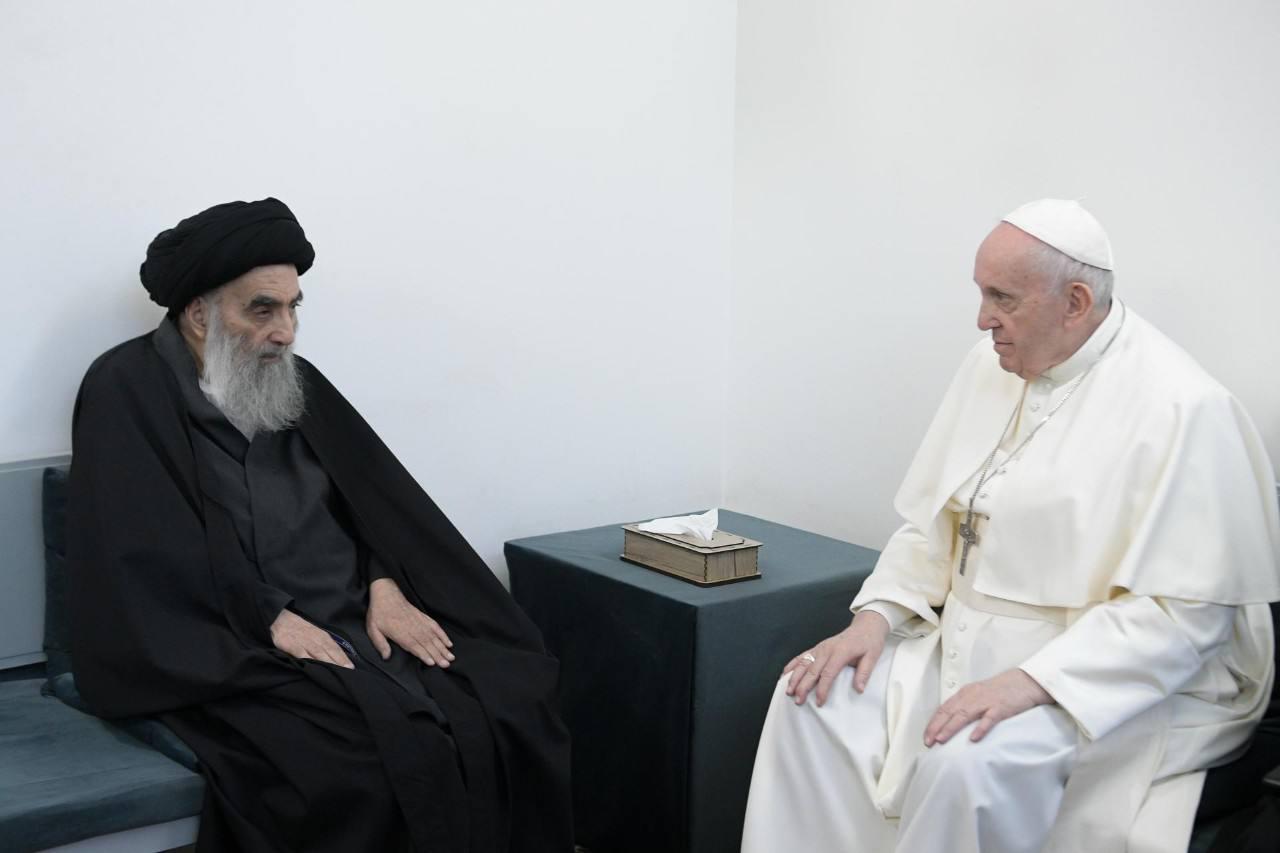 Shafaq News / The religious authority, Ayatollah Ali Al-Sistani, met this morning, Saturday morning, the Pope (Pope Francis), Pope of the Catholic Church and Head of State of the Vatican.

A statement issued by Al-Sistani's office stated that the conversation during the meeting revolved around the great challenges that humanity faces in this era and the role of faith in God Almighty and His messages and commitment to the lofty moral values ​​in overcoming them.

Al-Sistani talked about the injustice, oppression, poverty, religious and intellectual persecution, suppression of basic freedoms and the absence of social justice, especially the wars, acts of violence, economic blockade and displacement of many peoples in our region suffering from, among others, especially the Palestinian people in the occupied territories.

He indicated the role that the great religious and spiritual leaders should play in reducing these tragedies, and what is hoped for in urging the concerned parties - especially in the great powers - to give priority to reason and wisdom and to reject the language of war, and not to expand caring for their self-interests at the expense The rights of peoples to live in freedom and dignity. He also stressed the importance of concerted efforts to consolidate the values ​​of harmony, peaceful coexistence and human solidarity in all societies, based on fostering rights and mutual respect between followers of different religions and intellectual trends.

Al-Sistani praised the status of Iraq and its glorious history and the honorable Muhammad of its various affiliations, and expressed his hope that he would surpass its current ordeal in a not long time.

The statement indicated that Al-Sistani emphasized his concern for Christian citizens to live in security and peace and in full their constitutional rights, and indicated part of the role that the religious authority played in protecting them and the rest of those who had been wronged and hurt in the incidents of the past years, especially during the period during which the terrorists seized Over vast areas in several Iraqi provinces, and they practiced criminal acts there.

The religious authority wished the great pontiff, the followers of the Catholic Church and the general public of humanity good and happiness, and thanked him for taking the trouble to travel to Najaf to do this visit, according to the statement.

Pope Francis arrived Saturday morning in the city of Najaf, as part of the second leg of his historic papal visit to Iraq.

During his visit to the city, which is the capital of Shiism in the world, he met the religious authority, Ayatollah Ali al-Sistani, and then he will go to Ur, the birthplace of the Prophet Ibrahim, in the southern province of Dhi Qar.

On Friday, the Supreme Pontiff began his historic visit to Iraq from the capital, Baghdad, beginning with a meeting with the Prime Minister, Mustafa Al-Kazemi, and the President of the Republic, Barham Ahmed Saleh.

The Pope delivered a speech during his meeting with bishops, priests, civilians, consecrated persons, preachers and teachers at the Syriac Catholic Church of Our Lady of Deliverance in Baghdad.

And committed the organization of the so - called Islamic State of Iraq , the al - Qaeda in Mesopotamia in the era of 31 October of the year 2010 massacre of Our Lady of Salvation church in Baghdad 's Karrada district when gunmen stormed the church during the ceremony of the performance of the Mass . The incident ended with the militants blowing themselves up and killing and injuring hundreds of those inside the church.

The Pope will also visit Erbil, the capital of the Kurdistan Region, and meet with senior officials, including the President of the region, Nechirvan Barzani, and then visit four cities with a Christian majority in Nineveh Governorate.

Similar topics
» Abdul-Mahdi: I will lift the parliament request for my resignation
» During his meeting with Fuad Hussein ... the Pope of the Vatican talks again about his recent visit to Iraq
» Regarding accession of Iraq, 31st meeting held between Iraq National Committee and WTO
» Al-Kazemi during his meeting with Biden: I look forward to developing relations between Iraq and the United States
» Success of National Meeting Held Yesterday in Iraq