UN Watch put Iraq on a list under an abusive name, because it did not vote, alongside other countries, to condemn Iran for violating human rights.

The organization called the list a "list of shame" and defined it as a list of "countries that just voted (no) to condemn the United Nations General Assembly for Iran's human rights violations."

The United Nations accredited organization included a number of countries on the list, including Lebanon, Oman, Russia, Pakistan, China and India.

Iraq refuses to vote on an international resolution against Iran ... and Tehran attacks in a fiery response!

[size=30]Iraq refuses to vote on an international resolution against Iran ... and Tehran attacks in a fiery response![/size] 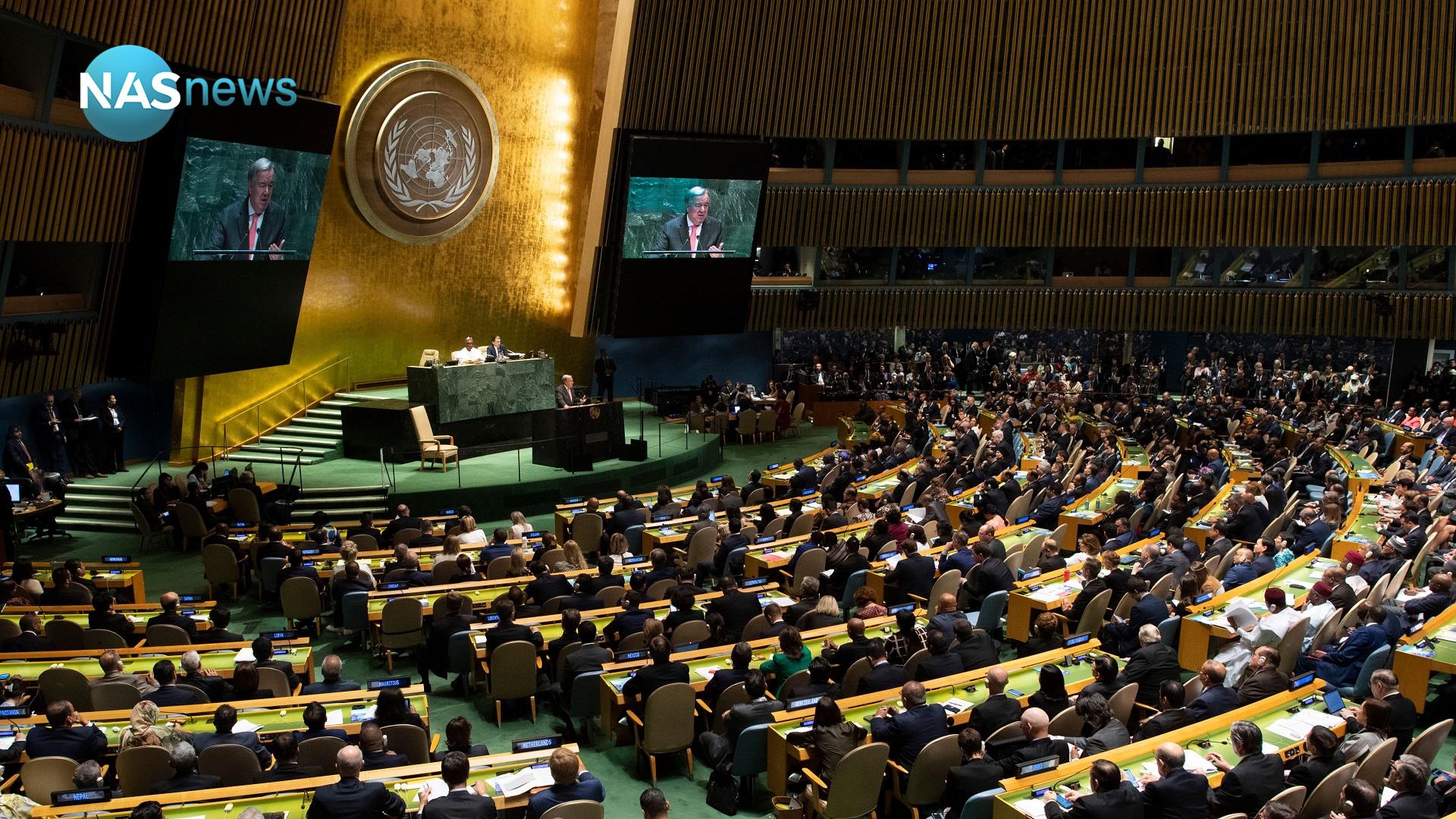 The Third Committee of the United Nations General Assembly issued a resolution condemning "gross violations of human rights" in Iran, and called on the Iranian regime to end the persecution and discrimination against opponents and minorities, Iraq, while Iraq refused to vote on the international resolution, which the Iranian Foreign Ministry described as "unacceptable and lacks legitimacy." Legal. "
This decision was proposed by Canada and 30 other countries, including the United States, Britain, Germany, and France. It was adopted, on Wednesday, November 18 (November), with the approval of 79 members, rejected by 32 members, including Iraq, and 64 abstentions. 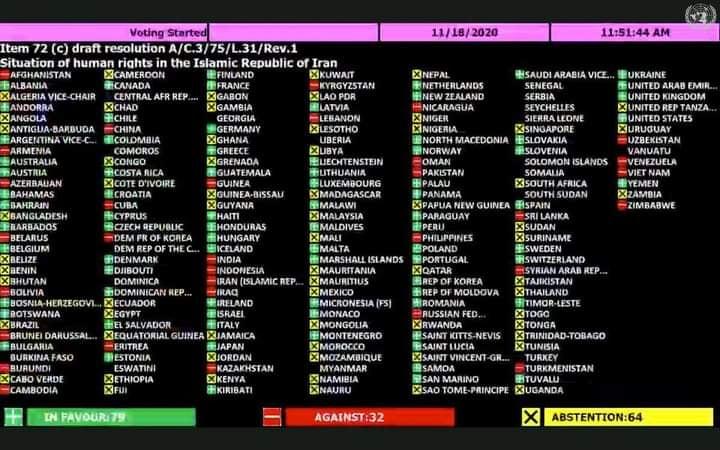 The United Nations resolution referred to human rights violations, including forced confessions and torture, such as the case of the execution of Naid Afkari, and the suspicious deaths of detainees in prisons, and called on the Iranian regime to take transparent measures to respond to these cases.

The resolution called on Iran to release the detainees who are imprisoned for their "peaceful human rights activities and to abolish all unfair sentences, including the death penalty and long-term deportation."

The Third Committee of the United Nations General Assembly also expressed its "real" concern that despite the decrease in executions related to drug crimes, the number of executions in Iran remains at a "very worrying level" and the Islamic Republic continues these operations in contravention of its international obligations.

The United Nations resolution also called on the Islamic Republic to amend "the poor conditions of prisoners", especially in the circumstances of the outbreak of Corona, and to end "deliberate refusal" to provide medical care, safe drinking water and adequate health conditions for prisoners.

The resolution called on the Islamic Republic of Iran to end the house arrest of the leaders of the Green Movement and put pressure on their families and relatives.

The United Nations also called on Iran to end all forms of discrimination against women and protect them from violence and human rights violations. The UN decision stressed that Iran should increase the possibility of women's participation in the political, economic, cultural and sports fields.

The United Nations resolution called on the Iranian regime to eliminate all forms of discrimination and violations of human rights against religious, ethnic and linguistic minorities and other minorities, and to ensure equality in their rights in society.

The UN resolution also called on Iran to release those imprisoned for defending human rights and public freedoms, especially those who were arrested during peaceful protests in November 2019. Abolish the harsh sentences imposed on protesters, including the death penalty and long prison terms.

The UN resolution also called on Iran, especially the security and judicial institutions in the country, to provide a "legal and practical" environment that provides the possibility of creating a "diverse" civil society and lifting "harsh restrictions" through civil society institutions.

For his part, Saeed Khatibzadeh, a spokesman for the Iranian Ministry of Foreign Affairs, described the decision of the Third Committee of the United Nations General Assembly on "gross violations of human rights" in Iran as "unacceptable and lacks legal legitimacy."
Khatibzadeh described the decision as a "repeat of baseless allegations based on incorrect and fabricated reports."
He accused the drafters, including Canada, of "using human rights and international mechanisms as tools to achieve their ambitions and political goals."
The government spokesman said, "What is regrettable is that some countries, including Canada, use human rights and their international mechanisms as a tool to advance their political ambitions and purposes."
He added, "Such unconstructive measures do not help in improving the conditions of human rights and their respect at the global level, but would only lead to fueling fabricated negative stereotypes and directing empty political accusations to independent countries."
Khatib Zadeh added, "The move of the Canadian government and all other governments adopting the resolution, which is a prominent example of exploiting the lofty concepts and values ​​of human rights to achieve short-sighted political purposes, condemned and lacks any credibility and legal effect."
He pointed out, "114 countries out of 193 countries who rejected or abstained from the draft resolution have declared their dissatisfaction with the hypocrisy approach of the decision-makers," calling on the Canadian government to "stop keeping up with the economic terrorism practiced by the American government against the Iranian people instead of pretending to be hypocritical with caution." On the rights of the Iranian people and to stop hosting the spoilers and looters of the wealth of the Iranian people, who found Canada a safe place to move to and invest in the money that they stole.
He stressed, "The proposed Canadian draft resolution that has been put forward several years ago in the context of Canada's hostile policies against the Islamic Republic of Iran has been approved by fewer than half of the members of the United Nations, including the Zionist entity, America, Saudi Arabia, Bahrain, the Emirates, Albania, Britain and Canada, while one voted against the decision or abstained. About the vote of 114 representatives. "
The spokesman considered Canada's move to "bring together a number of notorious governments in the field of human rights, such as America, the Zionist entity, Bahrain, the UAE and Saudi Arabia to teach the Iranian people human rights, a shameful step," and called on Canadian officials to work on "reforming their anti-human rights performance inside and outside the country." Their country and desist from their systematic policy of exterminating the descendants of the indigenous population of Canada, and to assume responsibility for participating in the commission of inhuman crimes by the Saudi regimes and the Zionist entity against the Yemeni and Palestinian peoples.