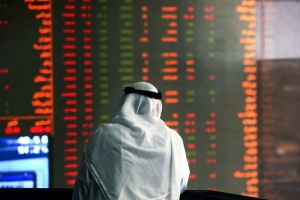 Analysts unanimously agree that maintaining the majority of Gulf currencies are pegged to the US dollar, which has become a heavy burden on the financial conditions in the countries of the region, in light of the decline in global oil prices and the repercussions they have been caused by the closure and foggy restrictions that still hover over the growth of the global economy.

The sharp decline in crude oil prices has led to a growing belief that the Gulf countries, especially Saudi Arabia, may be forced to abandon the riyal peg to the dollar, after maintaining that policy for decades.

The economic repercussions of the epidemic have prompted Gulf governments, which rely mainly on oil sales to collect foreign currencies, to bite off part of those reserves to support the private sector and citizens.

Fitch Ratings Ratings experts ruled in a recent report that the Gulf countries, whose fiscal deficit is exacerbated by the drop in oil prices, will devalue their currencies, although continuing to link them to the dollar may lead to the depletion of foreign assets and debt accumulation.

Analysts confirm that the reserves of any of the central banks in the Gulf countries are necessary to maintain the peg price and maintain it at the desired level so that the economy does not shake or be affected by external shocks as is the case at the present time.

"We do not expect any change in the exchange rate regimes pegged to the Gulf Cooperation Council countries in the medium term," Fitch said in her report. But she added that continuing to link "will entail a significant depletion of foreign assets or debt accumulation."

The agency stressed that Saudi Arabia, the United Arab Emirates and Qatar have sufficient resources to maintain their interconnection systems, while external support remains important to Bahrain, which its wealthiest Gulf allies pledged $ 10 billion in 2018 to avoid a credit crisis.

In the case of Oman, which has more foreign reserves than Bahrain, the fenders dissipate quickly, and future large debt payments may undermine confidence in the peg.

As for the UAE, which comes second in the Gulf states, its foreign reserves reached $ 110 billion, including cash and assets, compared to about $ 125 billion last September.

The rest of the Gulf countries are considered to be in an exportable situation, as Qatar has cash reserves of about 56.3 billion dollars, and Kuwait has a stock that does not exceed 39 billion dollars.

As for Oman’s reserves of foreign exchange and gold are estimated at 16.6 billion dollars, and finally Bahrain, which recorded a cash reserve of 3.5 billion dollars at the end of last February, without calculating its reserves with the International Monetary Fund or special drawing rights.

Fitch experts stressed that the structure of Gulf economies is appropriate to control their finances through rationalization of spending, not devaluation of their currencies.

The agency said, "The devaluation will only return with a few competitive advantages over the countries of the Gulf Cooperation Council due to the nature of their economies not diversified resources."

Social concerns are also likely to cause governments to refrain from devaluing currencies, as they may lead to higher costs of living.

"A potentially violent social response is a risk to both currency devaluation and fiscal rationalization, but fiscal policy may better be accommodated by a more gradual control," Fitch said.

Similar topics
» The International Monetary Fund announced an increase of dollar reserves, Iraq
» Breitling: "They are reducing the value of the dollar that means they're adding value to their own currency" (Ooops! The Dollar Is Part Of The Reserves. The Reserves Backing The Dinar Gets Reduced Too! LOL) 10/25/21
» OPEC Secretary General arrives in Baghdad
» Smith calls on Kuwait to "turn the page of the past" and the latter calls for facilities
»  Bloomberg: The collapse in oil prices is setting the stage for the erosion of Gulf financial reserves