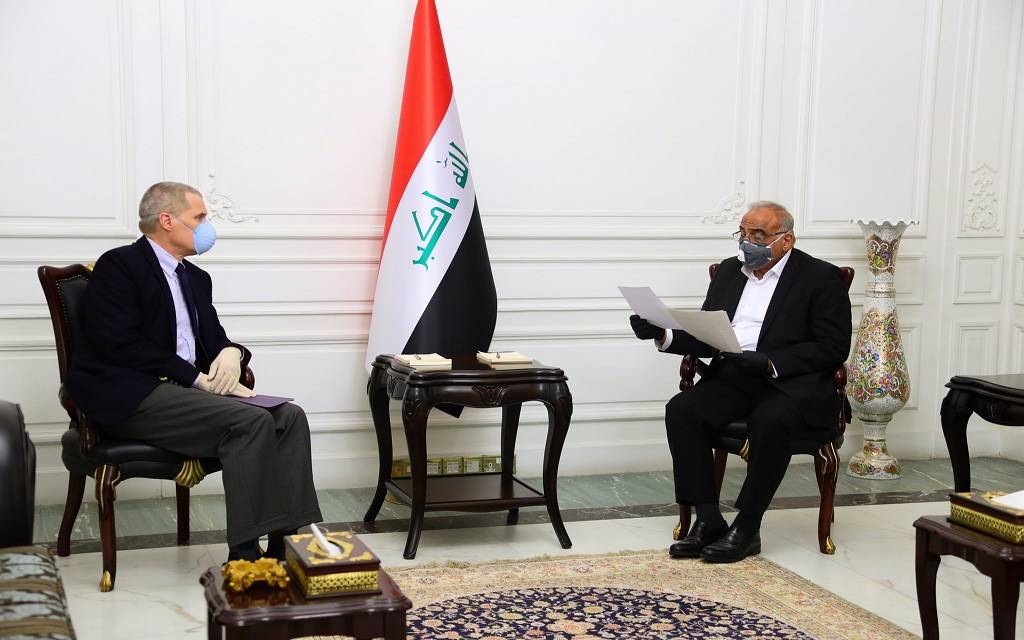 Direct: The Iraqi Prime Minister, Adel Abdul-Mahdi, welcomed the opening of a strategic dialogue between the Iraqi and American governments, in order to achieve their mutual interests and in light of decisions and developments in Iraq and the region.

This came, according to the media office of the Prime Minister on Twitter, during a meeting with the American ambassador in Baghdad, Matthew Toller.
The media office of the Prime Minister drew attention to the fact that the US ambassador assured the Prime Minister of Washington's proposal to specify the negotiating delegation and the date for the start of the talks, which was previously proposed by Iraq in various messages and meetings.
For his part, the Iraqi foreign minister, Muhammad Ali al-Hakim, said that the State Department had received a letter from the American State Department, proposing negotiations based on the concepts presented in the strategic framework.
The letter included, according to the Minister of Foreign Affairs, a comprehensive review of the future of relations in the economic, cultural, trade and security exchanges, bilaterally and regionally.
Al-Hakim confirmed, through his official account on the Twitter site, that Iraq welcomes this initiative and will set an appropriate date. 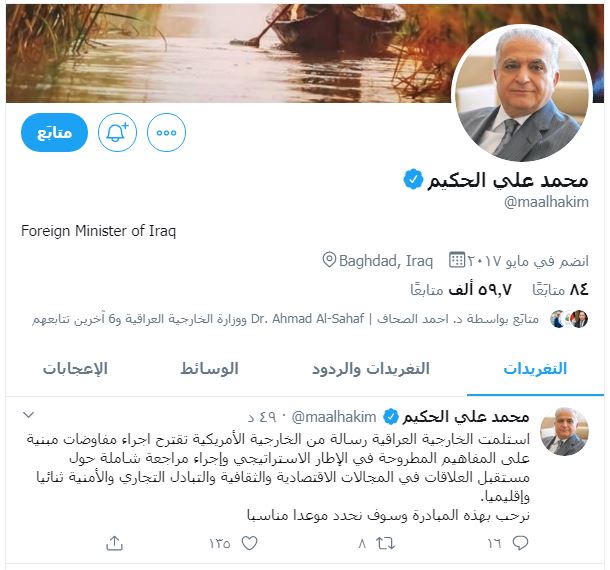 Washington is ready to support Iraq on Corona 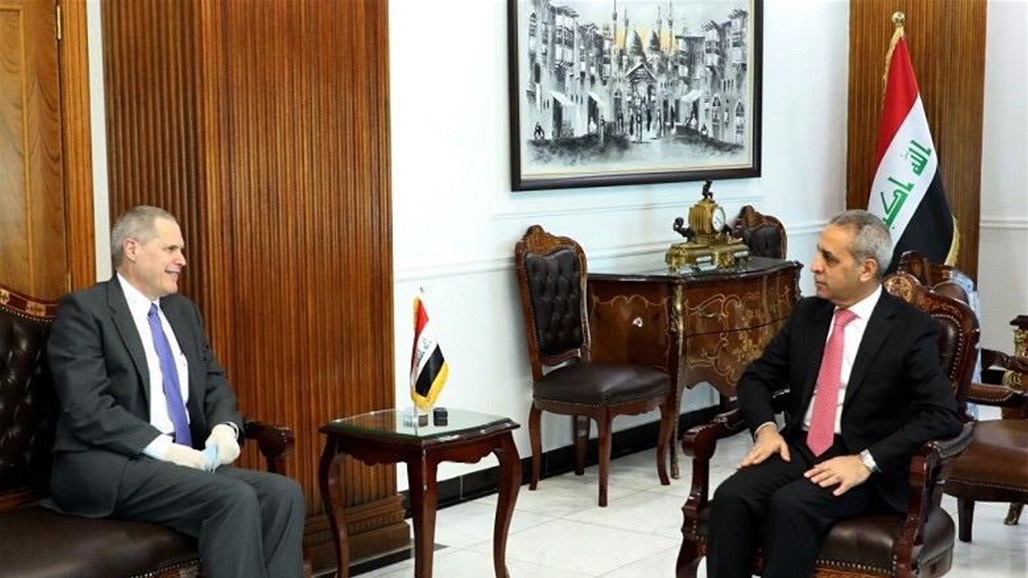 On Sunday, the United States expressed its willingness to support Iraq over Corona.

The Supreme Judicial Council said in a statement that Alsumaria News received, a copy of it, that "the head of the Supreme Judicial Council, Judge Faeq Zaidan, received at his office on Sunday morning, 5 April 2020, the Ambassador of the United States of America Matthew Toller," noting that he "discussed with him the judicial procedures in confronting the dangers of virus Sk. "


He added, "The American ambassador expressed the United States' willingness to provide support on this."

On Sunday 4/4/2020, Deputy Prime Minister for Economic Affairs and Minister of Finance participated in the coordination meeting to provide the required support to the health sector to combat HIV and Corona disease. As this meeting was held via closed-circuit television, in which the British and American ambassadors and Dr. Hazem Al-Jumaili, Undersecretary of the Ministry of Health, participated in the televised meeting, the World Bank official for the Middle East and from Amman the representative of the International Monetary Fund and responsible for Iraq. Global health.

On the sidelines of the meeting, Mr.  Fouad Hussein shed light on the work of the Ministry of Finance and its efforts in providing financial requirements and urgent needs to support the health sector in Iraq since the beginning of the crisis, as the ministry took the necessary measures to collect money through banks or through fundraising, whether from some donor countries or Through governmental and private banks as well as the private sector.

In another axis of the meeting, the general economic and financial situation and the impact of the international crisis on the Iraqi situation and the confusing challenges facing Iraq, whether in terms of fighting the disease or the sharp decline in oil prices, in addition to the political crisis related to the formation of the government  were also touched on, as was the relationship with the World Bank And the International Fund.

The Deputy Prime Minister stressed the importance of deepening relations with both financial institutions. And discussed how to financial support to Iraq in general and the health sector in particular. As for the issue of external borrowing, the matter requires legal approvals from the executive and legislative authorities, indicating that the ministry is currently preparing a letter to the World Bank to obtain additional financial assistance for the health sector.

For his part, the bank and the International Monetary Fund officials affirmed their readiness to respond quickly to provide assistance to the government of Iraq and to restructure some of the specialized programs in the health sector to meet the needs of fighting Corona.

Mr. Fouad Hussein expressed his thanks to the ambassador of the United States of America for the financial and logistical support that his country provided to the health sector in Iraq and in the field of fighting Corona disease, welcoming any financial support that might be provided by other countries in this context.

Iraq welcomes Washington's initiative to conduct bilateral negotiations based on the

concepts presented in the strategic framework Iraq welcomed the initiative of the United States to conduct bilateral negotiations based on the concepts presented in the strategic framework.

The Ministry of Foreign Affairs announced that it had received a letter from its American counterpart in this regard.

Minister Muhammad Ali al-Hakim said in a tweet to him, "The State Department received a message from the US State Department proposing to conduct negotiations based on the concepts presented in the strategic framework and to conduct a comprehensive review on the future of relations in the economic, cultural, commercial and security exchanges bilateral and regionally."

He added: We welcome this initiative and we will set a suitable date for the talks. He participated Finance Minister Fouad Hussein, in a closed - door meeting aims to finance Iraq in the face of a pandemic Corona.

Hussein said in a tweet on his Twitter account: "I participated in a meeting via closed-circuit television, to discuss the economic and financial situation and the implications of falling oil prices on the Iraqi economy and to study some proposals to overcome the crisis.

Hussein added:" We also discussed in the meeting in which an ambassador participated. the United States, Britain , and the representative of the World Bank and the international Monetary Fund as well as the Deputy Minister of Health, crisis and B Corona and the steps taken to support the health sector in Iraq to contain the epidemic dangerous. " 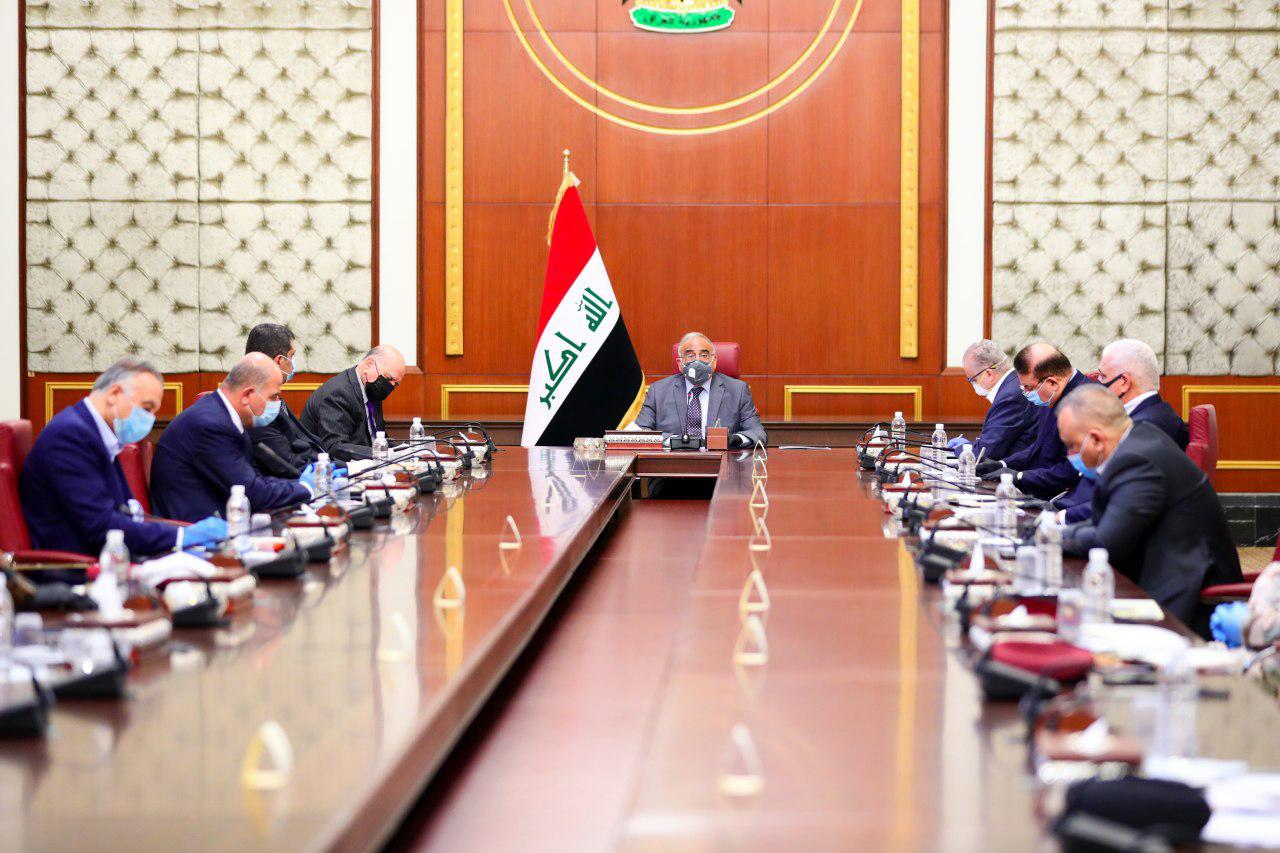 , Prime Minister Adel Abdul-Mahdi revealed, Wednesday, exchanges between senior officials in Iraq and the United States of America regarding the rebuilding of strategic relations and the redeployment of US forces.

Abdul-Mahdi said, in a speech in which he opened the meeting: "We decided to hold this meeting to discuss one axis, which is the file of Iraqi-American relations and the future of economic and security cooperation, and to discuss the military presence after difficult circumstances that passed and the fall of martyrs and losses, and after the decision taken by the House of Representatives, and under our eagerness to participate In taking decisions and ensuring the unity of the national ranks and reaching agreements that serve the supreme national interest. "

He added, "The axis of relations between the two countries must be conducted in an amicable, rather than hostile, manner, in the interest of Iraq and the United States as a partner and friend, and in order to preserve the interests of the region and the world."

He continued: "We received a few days ago an official note from the US administration related to the decision to build strategic relations and the redeployment of American forces from Iraq and a dialogue between two official delegations, and during the recent period, mutual contacts were held between senior officials of the two countries," noting "the large-scale troop withdrawals The foreigner, who was recently executed by official decree and under the law and order. "

He presented, "The text of the official memo, which he considered an important development in the relations between the two countries and for the stability of the region."

Page 1 of 1
Permissions in this forum:
You cannot reply to topics in this forum
Who is online?
In total there are 129 users online :: 2 Registered, 0 Hidden and 127 Guests :: 3 Bots

» After Erbil, the dollar exchange rate soared in Baghdad

Today at 9:58 am by RamblerNash

Today at 9:45 am by RamblerNash

» Iraq: The World Bank called on us to raise the exchange rate of the dollar to 160,000 dinars

Today at 9:42 am by RamblerNash

» Electricity: The moderate season has improved processing hours, and we are preparing for the summer with 22,000 megawatts

» Judy: "On Sun 11 April they expected to finish vetting Cabal-connections to ten plus Groups so that funds could launch for payouts" 4/12/21

» Fleming: "Our military intel contact said that Ramadan that starts now will not interfere with the RV liquidity release" 4/12/21

» MarkZ: "There were articles this weekend from Iraq that referred to the RV of the Dinar in “past tense”" 4/12/21

» Economist: more than $ 87 billion worth of state real estate outside Iraq

Yesterday at 9:23 pm by RamblerNash

» Al-Kazemi: We have succeeded in stopping the waste and the great corruption in the Central Bank auction, and we will not stop

Yesterday at 9:16 pm by RamblerNash

Yesterday at 7:02 pm by kenlej

» A member of Parliamentary Economy talks about 3 dangerous files related to the economy, the Iraqi dinar, and the population

»  IMF: The race between pandemic and vaccination will determine recovery in 2021

» The implications of the economic reality on national security .. future scenarios

» sheila is ...especially expectant this week.

» RVAlready claims -- They are setting the exchange rate for the currency.

»  RayRen98 says- Budget law is now effective and in place and there is no going back -- CBI is up to bat.

» Arab and Islamic countries announce the first day of Ramadan

» Iraq is taking measures to fully control the border crossings