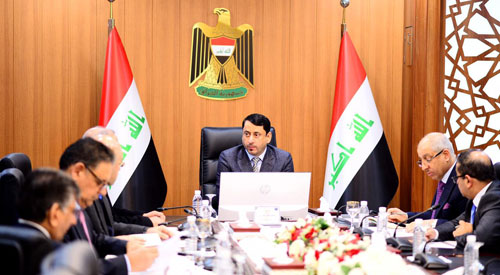 The Secretary General of the Council of Ministers, Mr. Hamid Naeem Al-Ghazi, affirmed (the commitment of the Iraqi government to international agreements and treaties, to advance the country's reality in various fields, and its keenness to build broad international partnerships).

This came during his chairmanship of the meeting of the committee concerned with the consideration of the technical cooperation agreement between the Iraqi and Japanese governments, in the presence of the advisor to the Prime Minister Mr. Kazem Al-Hassani and representatives of the relevant authorities from the ministries (finance, planning, foreign, and trade), to finalize the agreement taking into account the observations of the State Council, In preparation for display at the cabinet table soon.

The meeting discussed the procedures and mechanisms for signing the agreement, the most prominent of which are customs exemptions and entry characteristics, and a recommendation on facilitating them, and defining an administration for the Iraqi-Japanese agreement to bring the agreement into force.

The meeting pointed out the importance of the agreement and its positive effects on capacity development through sending a group of technical experts to train Iraqi human resources, in addition to the surveys that the Japanese mission will conduct on economic and social development projects.

Most users ever online was 2065 on Mon Apr 09, 2012 5:34 pm
Latest topics
» Most Controversial Document in Internet History: The Hidden History of the Incredibly Evil Khazarian Mafia

Yesterday at 4:30 am by RamblerNash

Yesterday at 4:20 am by RamblerNash