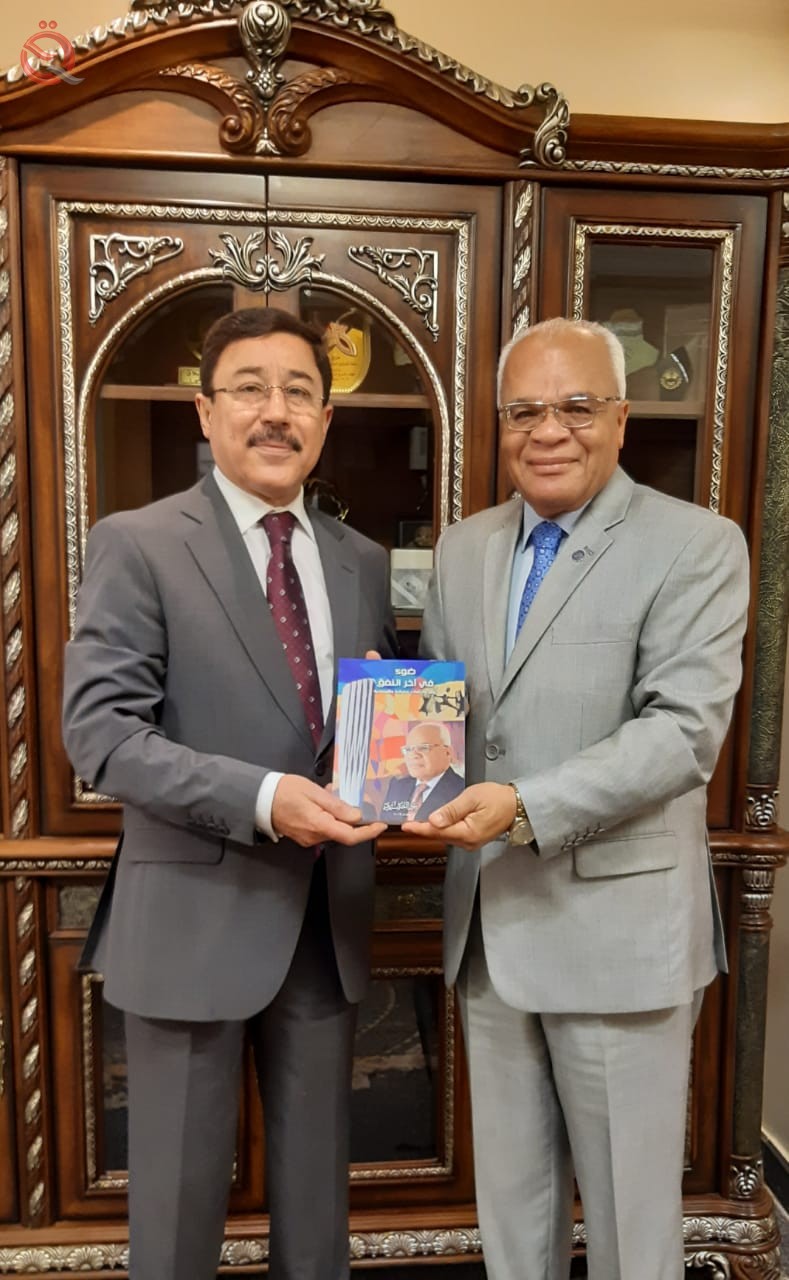 BAGHDAD -
The economic and banking adviser to the Association of Iraqi Private Banks, Samir al-Nusairi, announced on Monday the issuance of his book entitled "Light in the End of the Tunnel: Economic, Banking and Banking Perspectives", when he presented the first version to HE Dr. Mohsen Al-Alaq, Governor of the Central Bank.
The Governor blessed the publication of the book and the efforts of the author in following up the march of the Iraqi economy and analyze the reality of the banking sector and provide visions and proposals to achieve the required reform.
The book contains four chapters and 60 pages with 204 pages with an appendix of documents and tables. This is an analytical and documentary presentation of the positive and bright points in the process of economic and banking reform and the efforts exerted by the Central Bank and the banks during the years 2015-2019, which were manifested in achieving economic resilience during the economic and security shocks. Suffered by Iraq because of the decline in oil prices globally and the war on terrorism on behalf of the world.
The book dealt in a special chapter the role of the Central Bank and the Association of Iraqi private banks and banks in the development and community initiatives.
It is noteworthy that the new book is the seventh book of the author and presented to him by the Governor of the Central Bank Ali Alalak and Professor Khalil al-Shamma. 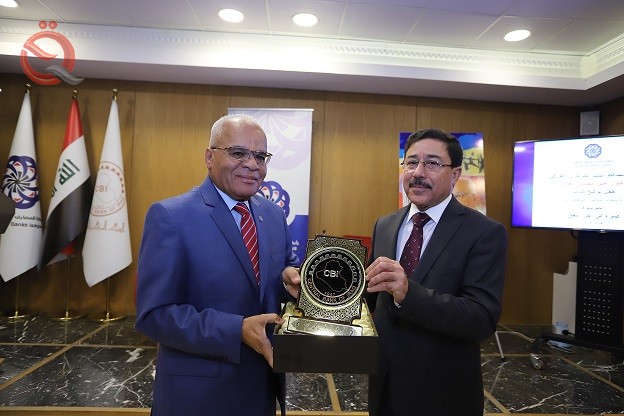 On Wednesday, the Association of Iraqi Private Banks celebrated the publication of the new book by the Association's Advisor, Mr. Samir Al-Nusairi. The celebration was attended by the Governor of the Central Bank of Iraq Ali Al-Aalak and the Financial Advisor to the Prime Minister. Muhannir al-Shaikhli, Central Bank Advisor Walid Eidi, Head of the Association of Iraqi Private Banks Wadih al-Hantal, and the Director General of the Central Bank's Administrative Department Saleh Mahoud. Ikram Abdulaziz, Director General of the National Investment Authority, General Manager of Industrial Bank Bilal Sabah Hussein and Abdul Zahra Al Hindawi, Member of the Governmental Media Cell, professors and representatives of Iraqi universities, the president and members of the Academic Coordination Committee and economic elites, board members, general managers, Media elites, representatives of Iraqi and Arab media and prominent businessmen.
The celebration began with an appreciation speech by His Excellency the Governor of the Central Bank, who praised the cultural and intellectual effort in the economic and banking field and the realistic and analytical method of the Nasiric author. The aim is to document and document the achievements achieved and the bright points in the economic steadfastness and economic stability in the circumstances that Iraq suffered during the last five years. (Light at the beginning of the tunnel) on the Nasiri and consider the issuance of four works in the period of years of economic shock and honest national effort distinct. He confirmed that he was reading the Nasiri literature from the cover to the cover of the importance of the proposals The realism and the possibility of his proposals and recommendations on the application as d occur. The appearance of Mohammed Saleh praising Nusiri, stressing that the inclusion of his writings analyzes and visions and proposals within the framework of the macroeconomic approach is an important addition to the Iraqi economic library has spoken the authors of the author and praised the role played by Nasiri in documenting the march of the Central Bank and the Iraqi banking sector and congratulated him this achievement and the speakers on D. Munther Al-Shaikhly and Walid Eidi. Star Al Bayati and d. Ikram Abdel Aziz and Abdel-Zahra al-Hindawi.
Then Samir Al-Nusairi presented his career with writing books and focusing on the contents of his new book, which included four chapters and sixty appendices and a total of 204 pages with annexes to documents and tables. At the conclusion of the wedding ceremony and the economic joy of honoring Nusairi by the Governor of the Central Bank and the President of the Association of Iraqi private banks and the Bank of Assyria International and the International Company for smart card. Then Nasiri began to give and sign copies of his book to invitees and the media.

Central Bank Governor: We are proud of Samir Al Nusairi's book and thank the Association of Banks for its support

Central Bank Governor: We are proud of Samir Al Nusairi's book and thank the Association of Banks for its support 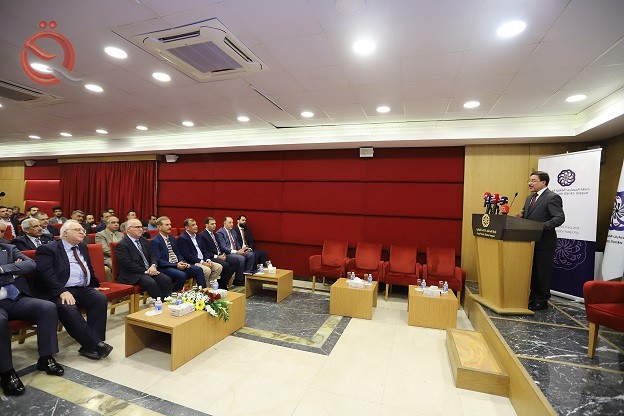 [size=21]The governor of the Central Bank of Iraq praised the contents of the latest book of the banking expert Samir Nusairi, entitled "Light in the last tunnel," and thanked the Association of Iraqi private banks to support such efforts in the interest of the local economy.


"I can say that the author of this book is the light in the first tunnel, and this stems from my personal follow-up to the intellectual output of the writer of the book and his continuing role in the correction," Al-Alak said in a speech at a ceremony marking the signing of al-Nasiri's book at the headquarters of the Association of Iraqi Private Banks in Baghdad. And follow-up and a statement of opinion in various areas and places, "noting that" is characterized by a special nature, as the view of the writer is a holistic view and not partial. "

He added that "Samir Nusseiri wrote the book with open eyes on the reality of the Iraqi economy as a whole, and this subject is very important because the banking sector and all policies that are linked to this sector is undoubtedly part of a large system affect each other," pointing out that "Nasiri when he writes It speaks of reality in all its dimensions, and its various effects on this sector, whether affected by what is going on around him or affect what surrounds him.

"We have a lot of indicators and facts in the central bank that prove this fact. Unless there is a holistic view of our reality, it is difficult to make fundamental structural changes. For example, in the absence of stimulus programs for the real industrial and agricultural sector, "But the real rate of implementation in these initiatives is still modest, although everyone is talking about the need and need of the country to stimulate real sectors and provide significant investment opportunities in this area."


"When we talk about the banking sector today, as the book speaks, and it looks at all the things that are related to the economic aspects and looks at it from this perspective, for example the issue of selling the dollar by the central bank, I said why we all talk about one side is the supply side , And why not talk about the other side of the demand for the dollar, "noting that" when we talk about the demand for the dollar, then we will correct the large structural imbalances that exist in our economic reality, but when we press on the offer by the Central Bank will create large imbalances in the Iraqi economy, It will affect All economic activities, monetary stability, exchange rate and so on. "

The central bank governor asked: "Why are those who respond to the request to be held accountable, without accounting and analyzing the other side of the demand, and how it occurs due to a significant shortage in the real sectors and their inability to satisfy the demand of domestic demand from agriculture and industry, in addition to other aspects such as health, "And when I read the book of Nasiri from the cover of the cover and his grandmother talking about these things, and we are proud of the tender, and thank the Association of Iraqi private banks to create such conditions and atmosphere and support for such trends.

» FLEMING UPDATE, 16 SEPT -- Tier 4B notifications may come out any time from now until Thurs. evening 17 Sept.