By Rudaw 18 hours ago

Iraqi former Prime Minister Nouri al-Maliki posted this photo on his Facebook page on May 10, 2019.

"The military escalation in the region, beating war drums, and the wave of confrontation, accompanied by the unilateral imposition of economic sanctions from the [United States] against neighboring Islamic Republic [of Iran] — which is contrary to international laws and norms — will create serious repercussions for the Muslim people of Iran and all the people of the region,” the head of State of Law Coalition, said in a statement on his Facebook page.

The typical victims of this escalation are Iraqis “who have just gotten out from a devastating war against the terrorist organization Daesh whose sleeper cells still threaten the stability and security of Iraq," Maliki added, using another term for the Islamic State (ISIS).

He “emphasized” that the role of the United Nations Security Council and international community is “to extinguish the fuse of the explosion which will be unleashed to the entire world."

Maliki was prime minister of Iraq from 2006 until 2014 when he faced immense pressure to step aside from Iran, the United States, Kurds, and Sunni Arabs, as the country was being overrun by the Islamic State (ISIS).

Iraqi Prime Minister Adil Abdul-Mahdi repeatedly has said the country doesn't want to be sucked into an international tug-of-war between the United States and Iran.

Related: US President Trump tells Iranian leaders to call him

US National Security Advisor John Bolton said in a statement on Sunday that the USS Abraham Lincoln Carrier Strike Group and a bomber task force were being deployed to the Middle East.

Anonymous sources told The Associated Press that US forces at sea and on land were thought to be the potential targets.

The US Navy posted video of the aircraft carrier passing through the Suez Canal on May 9.

On Thursday, a senior Hashd al-Shaabi commander condemned US Secretary of State Mike Pompeo's unannounced visit to Baghdad for a meeting with Abdul-Mahdi on Friday.

“Americans are in trouble now, especially considering that US troops' bases are known in Iraq and the region and can be targeted easily,” Moeen al-Kadhimi had said. “Pompeo's statements indicate the great fear Americans are witnessing today." 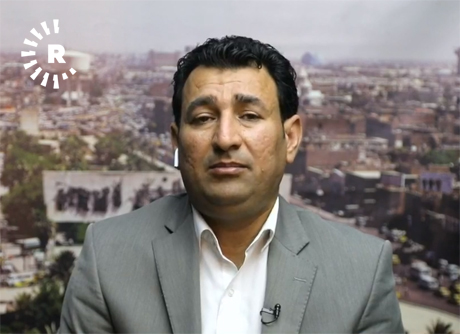 
"The claims that Hashd al-Shaabi will clash with the US troops have been denied. Hashd al-Shaabi is a security force under the authority of the Prime Minister, and it is politically and on the ground affiliated to the Iraqi government ... we work in line with the policy of the state," said Nassim Abdullah, a member of Hadi al-Amiri's Fatih bloc.

Amiri is the head of Badr Organization which is known to have close ties to Iran's Islamic Revolutionary Guards Corps (IRGC) — a designated foreign terrorist organization by the United States.

The United States repeatedly maintains that its presence in Iraq is contingent upon Baghdad's request.

However if Iraqi sovereignty is violated, targeting US troops inside and outside the country is possible, Kadhimi added.

However neutrality is difficult for Baghdad as much of eastern and southern Iraq has shared culture, trade, and religion with people in Iran, while the north of the country and the Kurdistan Region benefit from trade with Turkey. Iraq's Sunni Arab minority also maintain strong business ties to Arab states across the region.

Iran’s oil sector has been the main target in sanctions re-imposed by Washington after Trump pulled out of the nuclear accord on May 8, 2018, labelling Iran the world’s largest state sponsor of terror and demanding Tehran rein in its regional activities.

A year on, Iran’s currency has lost over 60 percent of its value, factories have been closed, and unemployment has jumped.

The Iraqi dinar has stayed relatively even with the US dollar over the past year with 1,000 IQD worth about 84 cents across the country.

Page 1 of 1
Permissions in this forum:
You cannot reply to topics in this forum
Who is online?
In total there are 157 users online :: 3 Registered, 0 Hidden and 154 Guests :: 2 Bots

Most users ever online was 2065 on Mon Apr 09, 2012 5:34 pm
Latest topics
» Far Out FLEMING UPDATE, -- Unfortunately the snail's pace of the RV roll out has largely been due to Trump, DoD, and the Alliance