THE US TREASURY NOTE WAS ANNOUNCED ON JANUARY 21ST.

EVEN THE BIG BOYS ARE LOOKING FOR VALUE DATE THIS MONDAY. 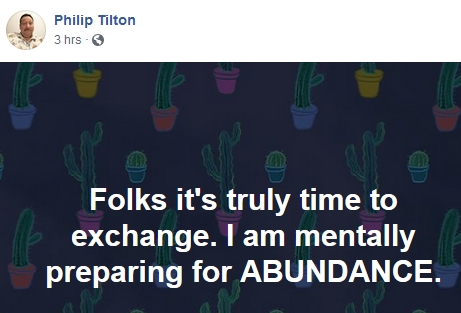 "Re: Philip Tilton/UST Note" by (Anonymous)

USTNs were printed and circulated on the Spring of 2013 and rates set onto back screen government trading platforms in the summer of 2016.

Please stop hyping something that has already happened.

Whomever offers such “fresh intel” is made to look like they are selling 8-track tapes to millennials.

Focus instead on why both the British and American governments are now on the same shutdown timeline, each sync’d for mid-February collapse by Trump and Queen just this Friday.

And also why Venezuela’s power structure was altered at the last second, that is if you’re looking for final hour signs of monetary performance.

The banking aspect of the RV has long been complete for quite some time—it’s all a matter now of setting balanced geopolitical cornerstones—east and west—before releasing unprecedented volumes of liquidity onto the world economy.

That goes for everyone in the intel game, stop speaking to things on hyperbole to add clicks that harvest higher advertising revenue.

Phillip Tilton wrote:Folks it's truly time to exchange. I am mental.