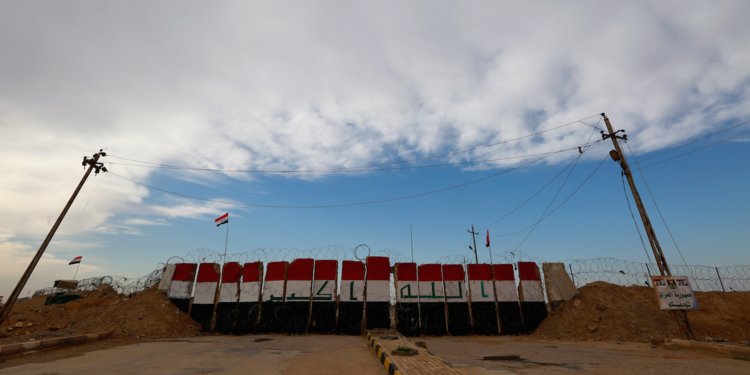 The Al-Qaim gate is closed at the border between Iraq and Syria at Al-Qaim in Iraq, November 27, 2018. REUTERS/Alaa al-Marjani


Al-QAIM, Iraq (Reuters) - From a desert hillside guarded by Iraqi Shi'ite paramilitaries, commander Qasim Muslih can spot Islamic State hideouts across the frontier in Syria. But he also keeps a wary eye on US warplanes soaring overhead.

"The Americans are spying on us," he said, squinting skywards. "But we can hold the borders. We'll fight whoever lays a finger on Iraq and its holy shrines."

The fighters Muslih commands are part of the Popular Mobilisation Forces (PMF), a grouping of mostly Shi'ite militias backed by Iran, which the United States regards as the biggest threat to security in the Middle East.
The PMF has been deploying in growing numbers at the border, fearing hundreds of Islamic State militants who fled Iraq are trying to cross back into Iraqi territory. 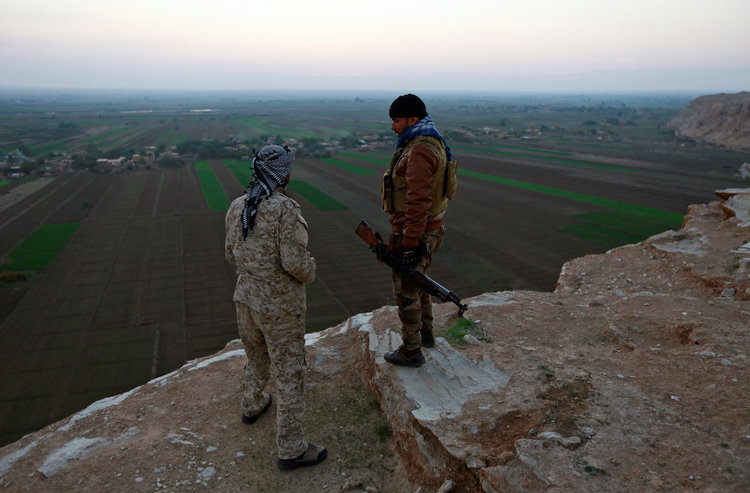 The deployment is strengthening the PMF's de facto control over large stretches of the frontier while its leaders are calling for a formal, permanent role securing the border.

But with fewer Sunni militants to contend with on the Iraqi side a year after Baghdad declared victory over IS, many Shi'ite paramilitaries now see the United States as a bigger threat.
The White House has indicated the US military presence is as much about countering Iran's influence as fighting IS, which is also known as ISIS. Asked about the suggestion of spying on the PMF, a coalition spokesman said: "The Coalition is concerned with the enduring defeat of ISIS."

As the battle against a mutual foe rumbles on, Washington and Tehran are keeping a close eye on each other in this part of the region, raising the risk of new violence.
The PMF officially became part of Iraq's security forces this year after playing an important role fighting IS. 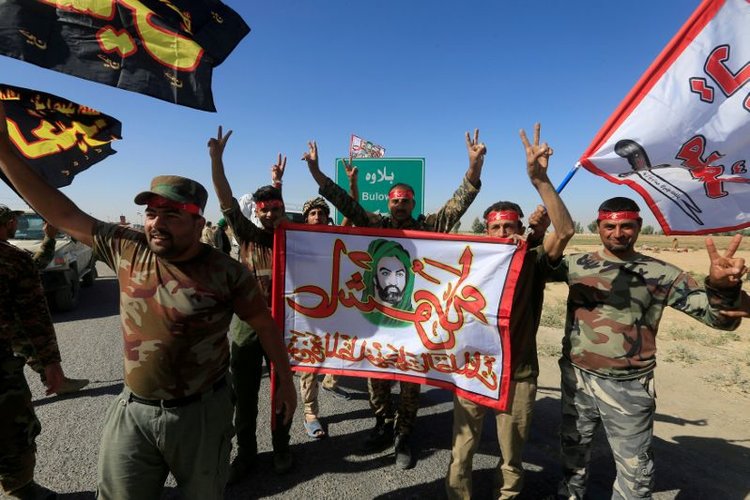 Factions including Iran-backed groups that fight inside Syria have concentrated their recent build-up around the town of Al-Qaim, which was recaptured from IS in November 2017 and was the last IS bastion in Iraq to fall last year.

The PMF control movement in and out of the town near the border with Syria. One commander, Abu Seif al-Tamimi, said the PMF now held a 240-km (150-mile) stretch of frontier in the area.
"We're ready to take over security," Muslih said in Al-Qaim. "We liberated these areas and didn't need help from the Americans."
Military commanders in units not allied with Iran say US air power was crucial to the defeat of IS in a three-year campaign involving the military, Iraqi Kurdish fighters and the PMF.
US forces have kept their bases in place. On the road to Al-Qaim, US armored vehicles passed PMF pickup trucks with masked fighters behind machine guns. 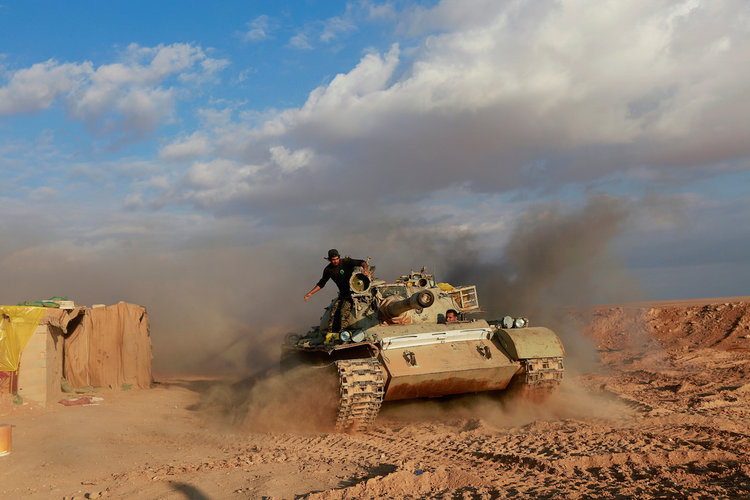 South of the town there are signs of growing PMF control and an increasingly crowded battlefield. The watchtowers of Iraq's border guard which nominally polices the frontier disappear, and the paramilitaries are the only force. Flags of Shi'ite factions fly at outposts a short drive from a one of the US bases.

In Syria, the US coalition supports Kurdish-led forces who control areas east of the Euphrates and have been fighting off a new IS offensive. In Iraq it supports the Iraqi military.
Fighting the militants on the other side of the river is the Syrian army, backed by Iran, Russia and the PMF, whose elite factions straddle the frontier.

A fighter at one outpost said a US warplane recently made a low pass over their position. "They're trying to scare us," he said.
Tension rose in June when the PMF blamed the United States for the deaths of 22 of its fighters in an air strike near the border and threatened to retaliate. The US coalition denied involvement in the strike. 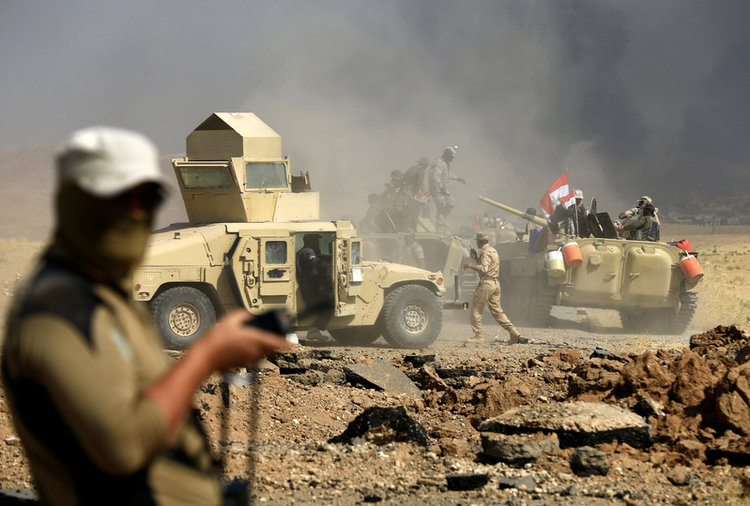 A US official, speaking on condition of anonymity, said "outright" aggression was not expected by Shi'ite militias before IS was fully defeated. "The question is what are they going to do once things are done," the official said.

The build-up of forces already risks a clash even if both sides wish to avoid it, said Philip Smyth, an analyst at the Washington Institute for Near East Policy.

"Nearly every major Iranian-backed Shi'ite militia has forces deployed near Al-Qaim ... that is the glowing hot dot on the map," he said. "The danger is always there (and) the Americans clearly don't have the forces to handle that. We only have a couple of thousand guys in the area. If the militias want to turn on the problems, they can. It's a Wild West situation."

Muslih said there were 20,000 fighters deployed near the border under his command, from Al-Qaim to areas to the southwest near Jordan, and more reinforcements were ready. The PMF is estimated to have a total of about 150,000 fighters.

Iran is seeking to secure its growing sway over a corridor of territory from Tehran to Beirut.

Washington says it is prepared to counter that with force. "We're not going to leave as long as Iranian troops are outside Iranian borders and that includes Iranian proxies," White House national security adviser John Bolton said in September. 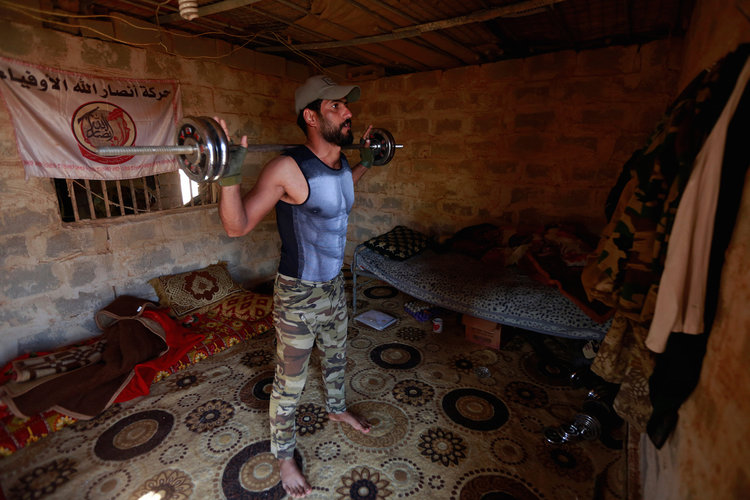 The US coalition says it is focused on defeating Islamic State militants who analysts estimate number thousands along the frontier.
"The Coalition has an outstanding relationship with the Iraqi security forces and all decisions are made with close coordination with our partners," coalition spokesman Colonel Sean Ryan said.

But those partners do not include the PMF, and this complicates coordination and Washington's relations with Baghdad. The PMF has powerful political allies, some of whom have seats in Iraq's parliament and say they seek an end to the US military presence in Iraq.

"The army coordinates with the US but doesn't understand the threat posed by the American presence," Muslih said. 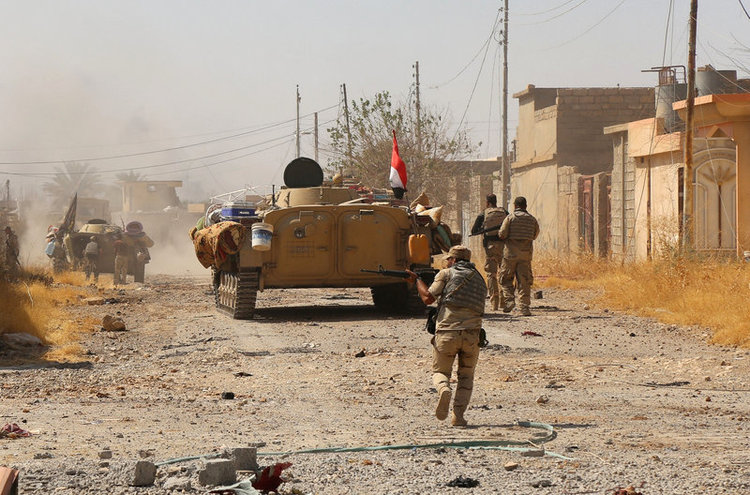 Iraqi army and Shi'ite Popular Mobilization Forces (PMF) gather during fighting with ISIS militants on the outskirts of Tal Afar, Iraq, August 24, 2017.Thomson Reuters
Qais al-Khazali, a powerful militia leader whose political wing counts 15 parliamentary seats, told Reuters in an interview there was no reason for US combat troops to remain.

Formed in 2014 as an unofficial umbrella group for Shi'ite fighters battling Islamic State, the PMF has always been dominated by factions close to Iran, and now reports to Iraq's prime minister.

A recent wage increase from the government brought PMF pay into line with that of Iraqi soldiers. Many PMF commanders say they are now funded only by the Iraqi state, but praise Iran for support that has included weapons and advisers.

"Iran sent everything when we needed help," Muslih said. "America is an enemy."

Similar topics
» Wed. 9:31 a.m.: PM says Iraq to repatriate Iraqi IS fighters held in Syria
» Special Forces disguised as ISIS fighters operating in Syria
» The Minister of Planning discusses with the commander of the border forces the support and development of Iraqi border control mechanisms
» High Noon in Iraq’s Wild West
» France: 7,000 fighters from Da'ash on the Iraqi-Syrian border