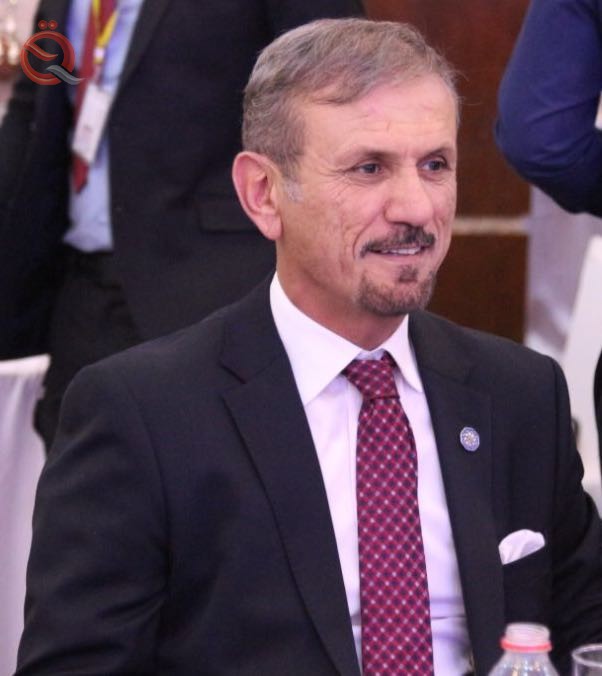 The head of the Association of Private Banks, Wadih al-Hanalal, praised the employees of Al-Sabah newspaper on the occasion of its 16th anniversary.

"At the outset, I would like to express my deep regret at not being able to participate in your celebration of the sixteenth anniversary of the launch of your newspaper Al-Sabah," Al-Hantal said at the ceremony held at the Al-Mahatta Foundation for Entrepreneurship. , Due to my travel to Paris to participate in the Arab International Banking Conference of the year 2018, along with a delegation of Iraqi banking high led by the Governor of the Central Bank Professor Ali Alalak .

"It is a pleasure for me to congratulate all the employees of Al-Sabah newspaper who are the glue and editors and writers and technicians to keep the" morning "lighting a path and a torch that gives hope and strength to provide Iraqis with greater resilience, unity and patience to face challenges and difficulties. The Iraqi scene is still full, and requires concerted efforts, especially the efforts of the media to reach the Iraqi people to safety, away from sectarian abhorrent and narrow regional, and corruption and rivalry and division .

"The Iraqi people have unequivocally affirmed their categorical rejection of all these destructive and destructive trends, as well as their insistence on cohesion, delaying and thwarting the partition plans that the enemies wanted to pass in the absence of time . "

"We have been, and will remain, your newspaper, the glue, the free platform that expresses the aspirations of the Iraqis in all their different recitations and components, and will remain the steadfast fortress to defend the causes of our people and its legitimate legitimate aspirations for freedom and freedom and to fight corruption and look forward to a promising future for our future generations. Security, security, prosperity and progress. You also want to see a solid Iraqi economy on a solid foundation and a solid base that does not depend on oil as the sole source of income, but depends on alternatives, including the ones that are valued in existence and the best investment for a prosperous future. Any country in the world is seeking to progress and diversify the sources of national income and create job opportunities for the young unemployed, and encourage them to set up small and medium - sized projects backed by the state, it is on the development and prosperity and to continue, as part of a system aimed at creating a comprehensive, sustainable and genuine development " .

"We can not fail to express our regret for the failure of the majority of the Iraqi media to highlight these trends, which led to the reluctance of many investors to enter the investment market in Iraq, and one of the main reasons for this failure is the lack of Iraqi journalists and journalists specializing in economic affairs, Not to exceed 1%, which affected the media to keep pace with the economic event, and caused the media institutions in a lot of mistakes, because of lack of understanding of economic terms and confusion between them.

"In order to address this problem, the Association of Iraqi Private Banks addressed the organization of the first economic information forum, which was attended by a number of specialists from inside and outside Iraq, with the participation of many economic institutions, ministries, organizations and organizations. Of the College of Information. The bulk of these decisions have been implemented, including the establishment of two courses for "economic media" in cooperation with the College of Information at Baghdad University.

He pointed out that "we do not forget the influential and great role provided by the Central Bank of Iraq as the first sponsor of the banking sector in our country, in support of all the activities provided by the Association of Iraqi private banks, including support for Iraqi drama, and the project of Baghdad, which is headed by the world musician Nasir Shamma, Cultural, artistic, and relief for the displaced, poor and orphans through the Community Activities Fund, in which banks contribute generously . "

"The Association of Iraqi Private Banks has contributed to the launch of the Institute of Governance in Iraq, sponsored by the International Finance Corporation, which aims at good governance of the public and private sectors and ending corruption and waste of public money. It is necessary to highlight the change that all Iraqis hope through the next government. The change must take the departments that have not achieved any significant achievement, and the adoption of good governance in the management of the country, I see through Tamasi from the work of the Central Bank of Iraq that his current leadership was able to manage monetary policy in the country as required, especially during the last three years, D keep this done achieved during the next phase . "

He concluded by saying, "It is not hidden from you, and you are the owners of the word and the makers of free opinion, the extent of the influence of large, powerful and effective media in general, and the press in particular, in directing the public opinion, which requires the workers in this sector professionalism, And to work hard and sincerely to promote civil peace, and to address the manifestations of violence and underdevelopment, through professional coverage of the Iraqi event, and the bias of the homeland away from the community and the crisis So that the media plays a key role in achieving stability within society through the transfer of events without distortion or falsification . "

Page 1 of 1
Permissions in this forum:
You can reply to topics in this forum
Who is online?
In total there are 78 users online :: 1 Registered, 0 Hidden and 77 Guests :: 3 Bots