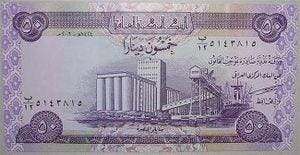 
Postscript. After reading several good comments on this blog exposing the buy Iraqi Dinar get rich quick scheme as a scam, I want to make it very clear that I also believe it’s a scam. My intent for the original blog was to answer tax questions about holding physical currency as an investment, not to drill down into the Iraqi Dinar scheme. I may do just that in a follow-up post soon. -R.G.


Dozens of people have signed up for tax consultations with me over the years looking for a windfall profit on the U.S. government revaluation of the Iraqi dinars back into U.S. dollars.  In other words, these were people holding dinars who were hoping they could exchange them for dollars again.


Most dinar investors are current and ex-military, warzone contractors and now speculators. A cottage industry of promoters has sprung up on the Internet promising dinar "get rich" schemes. Many have invested, say, $5,000 and they hope to make millions. I’ve always thought it was a scam, as it sounded too good to be true.


That means no lower 60/40 futures tax rate either (Section 1256). At least, it’s not considered a personal loss which otherwise can't be deducted, as is the case when a person returns from a vacation and exchanges his left over currency from that trip. Investors in dinars can deduct ordinary losses in Section 988, but few expect a loss.


Lords of Finance: The Bankers Who Broke the World by Liaquat Ahamed is about how the four leading central bankers from the U.S., U.K., France and Germany navigated in and out of WWI and financed recoveries and German reparations. These central bankers went off and on the gold and new dollar standards by manipulating their exchange and interest rates and much more. This is how money and power (military and otherwise) go hand in hand.


Our current situation begs the question: Did the Bush administration plan on, and is the Obama administration still considering, paying for part or all of the Iraq war by collecting taxes from the revaluation of the dinar?


Maybe the story here is just that it’s a scam. But, if rumors in the marketplace are true, and the dinar does revalue and allow conversion for most to pre-war levels, what are the ramifications for the government, Iraq, the military, investors and taxpayers?  Also, what’s holding up the revaluation? Can Iraq handle it?


It does sound like a happy ending which makes me suspicious.  How much tax revenue do U.S., state and local governments stand to collect? How many former and current military personnel and contractors stand to become millionaires overnight?

Re: Is The Iraqi Dinar Worthless Paper Or Maker Of Millionaires?