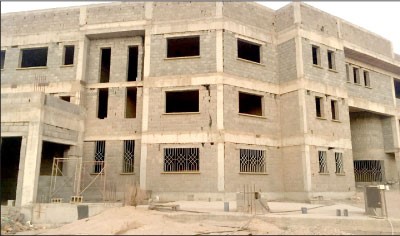 An adviser on investment issues that the lack of choice and corruption and the lack of commitment of many ministries and agencies standards of referrals in the system of government contracts and the transfer of most ministers contracts projects according to their own, causing us a disaster and ruin in all strategic projects in Iraq, but the government is going to address this radically, The government is going to account for those who fail in accomplishing the projects and changing all the workers in all the ministries, because it is a shame to remain silent on those who wasted our financial resources in projects that are fictitious, sluggish and failed.

The losses of Iraq, according to specialists 200 billion dollars due to the failure of projects, and corruption was the most important reasons that prevented the completion of thousands of projects and disabling in Iraq, since 2003 - until today, the fate of public money either theft or waste in projects not completed and the other stopped and fell to pass Many years have stopped, and there has been no talk even about the allocations spent by the state.

"What will be tackled by the government in the coming days of this year is the importance of managing the next strategic projects, and the ability of this administration to build Iraq and its infrastructure, especially since everyone knows how the mismanagement of these projects has affected," said Thaer al-Faily, an investment adviser. The projects on the level of services provided to the citizen, not to mention the poor quality of projects that missed the opportunity to build Iraq to improve the reality of service, pointing to the existence of several factors that led to Iraq to remain without service projects and infrastructure projects such as roads, hospitals or schools or stations, , Followed by: Yes corruption was behind this reality, but not only, but the ignorance and underdevelopment in the management of projects is already led to strong weaknesses, the state is now trying to avoid those mistakes.

The most important of these points is the poor studies of these projects, where the projects begin without studying the feasibility of real economic and technical or the feasibility of the infrastructure of these projects, and the other factor is poor designs and specifications, because most designs of our projects lagging back to the past years, And we see it in the construction of bridges backward and very bad. Because the presence of a number of contractors are paying money to the consulting offices in the state to design the bridge with poor specifications lagging, until the contractor comes to agree to achieve that bridge at the lowest price, but the third point is the lack of commitment of many ministries and bodies standards of referrals in the system of government contracts, As most of the ministers refer contracts to projects according to their wishes, because the process of authorizing the Minister to transfer contracts under $ 50 million was a disaster too large, and spread corruption in Iraq and prepared for him and fired into the air, and even protected the legal corruption, which must be changed.

"The fourth point is the poor selection of the contractor. The contractor should be considered and the best candidate who can manage the project in good terms should be the contractor who is technically and financially capable and able to deliver, but this was not previously in Iraq, Corruption and bribery, and although we know that there are a lot of contractors are not good, but they have expanded financially because of the ability of the Minister of Finance to the transfer of giant projects to them, which produced us very weak contracts, most of which was not completed, and the construction of schools is the best evidence, M Lyon has 60% of the value of the completion of these schools, for the work of 90 schools, but only 11 schools have been completed, with more than 7 years on this project, and the amount of millions of millions and still the contractor, is not this bad selection and corruption and disaster should not Repeated.

The fifth point, the most important, is the poor engineering supervision, which is one of the most important citizens to produce a mature engineering project. The consultant must be competent and not corrupt, but the engineering supervision was the cause of the destruction and damage to the projects. A number of supervisors supervisors were writing imaginary completion and dozens of projects to take the contractor 40 or 50% of the value of the project as a completion, while not completed more than 2 or 3% of the project, stressing that all that was said led to sabotage all strategic projects of Iraq and this will not Is repeated again because the Government is going to address it radically.

On the other hand, economist Amer Jawahri said in an interview with "(to the extent), we are far from all the details, without the existence of a professional and efficient management of a genuine will for the benefit of the nation and cadres working in this direction, each solution comes to patch large cracks, Emphasis on the existence of priorities for the selection of projects in the light of the resources and feasibility studies of these projects based on the service and productivity provided and the strengthening of infrastructure and these priorities when linked to resources with an efficient and keen management then we will address the rest of the things, continuing: Phantom projects come through Existence of solid departments, and these important aspects, yes, if there is feasibility studies should be paramount but all previous projects prepared with feasibility studies and claimed then it is a solid, integrated, and here the problem is certainly not in the feasibility study, but in the project selection and priority and what will result from a real service to the country.

According to al-Jawahiri: "The accountability of all minors in this aspect is the solution. Today, the achievement is not the diagnosis, because it is a disgrace for those who passed through those projects, and shame on those who were silent when they knew that there were fake projects and others that were false. We call for the existence of accounting first and then start to prepare real projects, and it is necessary to change all the workers on projects in all ministries as long as we failed miserably and put us financial resources and stole the advance payments, as the streets and bridges, which completed the example of the failure of large and very large, today We must hold accountable those who carried out these projects, stressing: We We will not succeed in Iraq if we do not bring someone and put it in front of the television screens and say what you did and where your achievement and what is your shortcomings and how will be held accountable, we will change nothing, and we will remain in a vicious cycle without change or evolution.

Similar topics
» Parliamentary Integrity reveals its intention to present important files to the Supreme Anti-Corruption Council, most notably the currency auction
» Committee of projects lagging: the investment bodies of Baghdad and Najaf to resolve all investment projects
» Iraq .. Referral of 333 persons accused of corruption for trial, among them 20 of the rank of minister
» The industry announces the referral of the Sumer cigarette plant to the investment
» The referral of 23 cases of financial and administrative corruption of the Sunni stand to the Integrity Commission

Page 1 of 1
Permissions in this forum:
You cannot reply to topics in this forum
Who is online?
In total there are 55 users online :: 1 Registered, 0 Hidden and 54 Guests :: 2 Bots