Undergoing chemical, biological and nuclear weapons training in preparation for Iraq was nerve-wracking, but excavating here has been a revelation 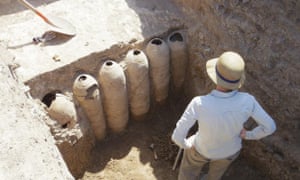 Test trenches: expect the unexpected. And then try to explain it. Photograph: Mary Shepperson


Mary Shepperson is a freelance archaeologist specialising in the ancient Near East.
Friday 16 December 2016 08.58 EST


Before the very first time I was going to excavate in Iraq, back in 2012, I have to admit I was a little apprehensive; I mean who wouldn’t be? Thankfully the university running the project completely allayed my fears by sending me on a chemical, biological and nuclear weapons training-day, followed up with a course on unexploded ordnance and not stepping on landmines. After this I was so wholly put at ease that I thought about maybe staying at home instead.
I did come away with some useful information; I now know that landmines explode as soon as you step on them rather than going click and giving you a moment to look back at your friends like they do in the movies. If I’m exposed to mustard gas I should drink an alcohol solution and rinse myself in milk (or is it the other way round?). They gave me a chemical weapons testing kit for checking any suspicious substances I might find seeping out of munitions; I’ve only used it once and that was on a bottle of Iraqi-made Sir Henry’s London Gin, which was suspiciously cheap but free from all common nerve agents. 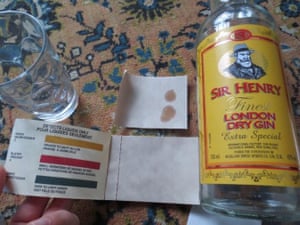 Testing kit in use. Of course if I did excavate munitions with suspicious seepage I wouldn’t have a chance to use my testing kit as I’d be too busy running like a person who wants desperately to live. Photograph: Mary Shepperson


The chemical precautions for this first project were thought necessary because we were excavating on the outskirts of Halabjah; the Kurdish town which was bombed with chemical weapons in 1988. There was a possibility that unexploded chemical shells might have buried themselves in the ground just where we happened to dig our trenches. I feel the balance of probabilities to be heavily in our favour on this particular risk, but it looks like I’ll be back there in the spring to have another go at getting poisoned. In three seasons of work I found nothing worse than some anti-aircraft rounds and a nest of baby snakes. The risks of archaeology in Iraq are generally overstated.

Iraq is in fact an archaeological paradise. There’s more archaeology in the country than archaeologists will ever be able to get to grips with or maniacs will be able to destroy. The five projects I work on in Iraq are spread across the Kurdish north and the Shia south (leaving the problematic area in the middle well alone) and they cover periods from the 5th millennium BC, at the little site of Gurga Çhiya, to the Ottoman remains on the magnificent Citadel of Erbil.
This spring I helped to begin a new project aimed at rediscovering a great classical city of Mesopotamia. 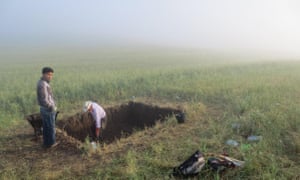 Excavating in the fields around Halabjah. Photograph: Mary Shepperson

An hour and a half’s drive north of Basra, amongst the oil fields and the unrelieved flatness of the southern alluvial plain, lies Alexandria-on-the-Tigris; a grand port city founded by Alexander the Great in 324 BC as an entrepôt at the head of the gulf. From the 4th century BC to the 3rd century AD overland trade flowed to the city from Syria, the Levant and the Mediterranean, via Petra and Palmyra, to meet trading ships coming up the gulf from Arabia and the west coast of India. At its height, under its 3rd name Charax Spasinou, the city covered over five square kilometres, minted its own coins and was home to a large cosmopolitan trading community.
Until now all that is known of Charax Spasinou comes from textual sources.

The site today feels utterly desolate. The coast lies far to the south; the result of centuries of silt deposited by the Tigris and Euphrates rivers. The city has been smothered by repeated flooding, leaving the sloping mounds of the massive ramparts as the only obvious features. Adding to the visual bleakness, the surface is littered with debris from the Iran-Iraq war when the city’s ancient fortifications were reused as defensive earthworks by the Iraqi army. 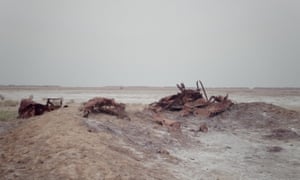 The wastelands of Charax Spasinou today, coated in salt and the remains of military hardware. Photograph: Mary Shepperson

It’s hard to know where to start with such a huge site; it can feel a bit hopeless standing in the middle of five square kilometres of archaeology holding a six-inch trowel. Luckily we have Science. A small team of German geophysicists kindly agreed to spend nine sweaty days trudging up and down part of the site with a magnetometer in the hope of getting some clues about what we were dealing with, as well as testing if all the landmines had really been cleared. The results were spectacular: 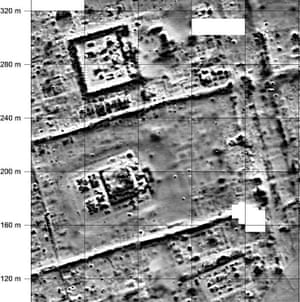 Magnetometry measures the tiny differences in magnetic field produced by different materials below the surface. Results from magnetometry are often unclear and difficult to interpret, but not in this case. The ancient city is wonderfully revealed, gridded into residential blocks in the Hellenistic style and punctuated by monumental buildings. The geophysics shows archaeology of exceptional scale and magnificence below the featureless surface.
Although the magnetometry survey covered 90,000 square metres, this represents less than 2% of the city.

You never really know anything about the archaeology until you put some holes in it, so using the geophysical results we dug some test trenches which immediately made everything much more complicated. The monumental buildings which were so clear on our geophysics and drone photos seem to be made up of layers of ephemeral phases, making them hard to define, and excavation was hampered by the discovery of inconsiderately-placed dead people. What looked like a large boundary wall on the magnetometry turned out to be a large ditch mysteriously lined with pots.
The test trenches yielded little more than pottery in terms of objects, and the highlights of surface collection were a few badly weathered coins. The real treasure of archaeology is of course data and we now have buckets of that to work with (in my view, the real treasure of archaeology is treasure but it’s not cool to say so).
Clearly, Alexandria-on-the-Tigris isn’t going to give itself up to archaeological science easily and we have many seasons of work ahead before we can begin to understand this lost city of ancient Iraq.

Page 1 of 1
Permissions in this forum:
You can reply to topics in this forum
Who is online?
In total there are 90 users online :: 1 Registered, 0 Hidden and 89 Guests :: 2 Bots

» Iran to hold five exclusive exhibitions in Iraq by March 2022

» Al-Rafidain: The completion of raising the salaries of retired workers for the months of July and August

» Exchange rates continue to remain stable as the holiday approaches

Yesterday at 4:20 pm by Mission1st