The Extraordinary Potential of This Treatment to Heal Brain Injuries

The Extraordinary Potential of This Treatment to Heal Brain Injuries

The Extraordinary Potential of This Treatment to Heal Brain Injuries
March 12, 2014 Health 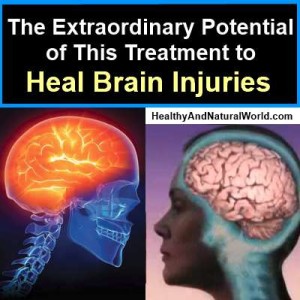 I’ve always been fascinated with the amazing abilities of our brain, and have written in the past articles about improving memory and brain function with herbs and foods, as well as other techniques. I’m always interested to find a new information about our brain, and when I read about a new study that uses hyperbaric chamber to treat brain injuries, I was immediately caught out. Now you probably think to yourself: “what is all the fuss about?” after all, the attempts to repair brain damage in a hyperbaric chamber, where the oxygen concentration is particularly high, are well known for more than 30 years. And indeed this is a good question.

Brain damage, as a result of head injuries, stroke and other diseases can cause severe physical, psychological and cognitive disabilities. So far the primary treatment was rehabilitation and the results were limited. Now a new Israeli study offers a new hope: exposure to oxygen-rich environment within the hyperbaric chamber, even years after the injury, can significantly improve the condition of patients and heal brain injuries.

Common theory vs. the new theory

The idea that you can repair brain damage in hyperbaric chamber was born in the 90s, but the theory has not been examined so thoroughly because it contradicted the prevailing view at the time which believed that neural networks in the brain may renew and change only in childhood, or in a limited time frame after injury.

Two Israeli studies published on PLoS ONE scientific journal consisted of 130 patients with brain damage of varying degrees, whose situation has been stopped improving and was considered chronic. The participants were exposed to the special conditions in hyperbaric chamber containing oxygen-enriched air, and their brain function was followed with advanced imaging methods. The results were very promising: it turns out that the concentrated oxygen can stimulate dormant nerve cells, restore neural networks and improve the brain function of patients – even years after the injury.

One of the study participants was Dr. Daphna Tekoah-Shir, who was injured in a train accident in June 2005. After the accident she was treated and recovered physically, but cognitively she never returned to herself. Her concentration, memory, reading, speaking and orientation were affected and haven’t been improved. All the tests she had done found nothing, because brain mapping is limited in detecting a situation like hers – lots of minor and scattered brain damages. Then she heard about the experiment in the hyperbaric chamber and decided to join. The benefit was immediate: after a few treatments, she felt a big improvement. This was a fantastic feeling she had not felt in years.

The brain mapping confirmed her feelings and found out that the neural network activity was substantially increased. She went through 40 treatments in a hyperbaric chamber, five times a week for two months, and came back to herself.

Dr. Daphne Tekoah-Shir was not the only one. The innovative treatment gave back many different functions to the brain victims who participated in the study. After years of severe disability and dependence on others, many of them returned to walk, talk, dress, bathe, cook, read and even climb stairs – all on their own.

The study focused on people who were affected six months to five years ago, but already the researchers saw a significant improvement even in injuries that occurred 20 years ago. The results were very clear and amazed even the researchers. Some of the brain mapping showed a significant improvement (increase of over 25% in some areas) after treatment in a hyperbaric chamber. Now you probably ask yourself how it all happens?
The secret of the hyperbaric chamber

The key to the success of the treatment lies in the high concentration of oxygen that reaches the brain tissue. In the damaged brain there are still many nerve cells that are still alive, yet don’t receive enough energy to return to function. Due to its importance, the brain receives a relatively high rate of oxygen, about 20% of the oxygen that enters our body, but it turns out that this energy is channeled mainly to active areas and not to damaged and dormant areas.
Thus, the supply of oxygen to the brain under normal conditions is not able to repair and heal the existing damage and cannot build new blood vessels, renew connections between nerve cells, and improve the function of dormant nerve cells – which all by their very nature require a particularly large amount of energy and oxygen.

In the chamber, however, there is a very high concentration of oxygen, up to 10 times the normal concentration in the air we breathe. Therefore, the brain can allocate the energy needed to repair damaged and injured areas, hence the significant improvement in the participants functioning.

The remarkable success of the study raises many hopes, and it is believed that treatment in a hyperbaric chamber has a great potential to treat a large variety of brain diseases and injuries. It is believed today that many brain disorders are related to issues of energy management in the brain. Such a problem can arise, for example, in older age, with the decline in the efficiency of blood flow to the brain and inside it. Therefore, the new treatment may well be able to assist in the early stages of dementia or Alzheimer’s disease, and prevent the deterioration of the disease. Maybe in the future our brain will be able to get an “anti-aging” treatment that will be able to maintain its functioning until our last day – who knows?

The state of Texas has been considering to fund this innovative treatment for people affected by head injuries, and for soldiers returning from Iraq and Afghanistan with post-traumatic stress disorder.
http://www.healthyandnaturalworld.com/heal-brain-injuries/

Re: The Extraordinary Potential of This Treatment to Heal Brain Injuries