Tue Mar 04 2014 eleven twenty-eight p.m. | (Voice of Iraq) - long-Presse / Baghdad promised the Commission on oil and energy parliamentary, on Tuesday, that many of the international oil companies operating in Iraq, intends to withdraw and leave the country because of "bureaucracy and corruption" faced, while demanded the government to rectify the matter through the enactment of the oil and gas processing investment law and facilitate the work of those companies along the lines of what is supported in the Kurdistan region, confirmed that the head of government "lacks vision and deal with the economic meltdown about media without putting appropriate alternatives." said a member of the Committee on Oil and energy parliamentary,

Qassim Mohammed, in an interview to the newspaper (range), "The information received by the Commission confirms the intention of a number of international oil companies operating in Iraq to withdraw because of the bureaucratic and financial and administrative corruption rampant in government departments," noting that there are "harassment practiced against oil companies operating in the Ahdab field, specifically the Chinese company, as happened before in the Rumaila field. " revealed Mohammed, for "the presence of interference in the work of those companies by influential elements," likely to "witness in 2014 the current, the withdrawal of a number of these companies oil because of the problems faced by both the security, or ill-treatment by Iraqi ministries. " said MP from the Kurdistan Alliance, said there was "transactions entered into in order to get kickbacks from the oil companies in one way or another," pointing out that some of the "ministries dealing with those companies manner uncivilized when reviewed for compatibility belongings. " and carrying Mohammed, "The government is fully responsible for the withdrawal of the oil companies from Iraq," calling for "the adoption of the experience of the Kurdistan region in dealing with the oil companies and what they offer their facilities in their dealings with ministries and customs." He urged the member of the Commission on oil and energy parliamentary government to "make a greater effort to pass a law of oil and gas inactivated and amend the investment law," returned to "the investment law in the Kurdistan region is much better than that adopted by the federal government." it said other member of the Committee on Oil and energy parliamentary, Awad al-Awadi, said in an interview to the newspaper (range), said that "with international oil companies operating in Iraq dealings with all oil-producing countries," noting that they "are facilities by those countries." said Al-Awadi, that "administrative procedures strict and mismanagement, both at the level of the Council of Ministers or the Ministry of Oil, as well as interventions by the government and the provinces, caused the loss of those companies the confidence and withdrawal from work, "and urged the government to" address the issues as soon as possible, whether the amendment of some laws, or enactment of a law of oil and gas, which will all the problems facing the work of these companies. " explained MP for the Liberal bloc, that "more than 70 international oil companies operating in Iraq, has denounced it as a result of problems between Erbil and Baghdad," he continued, "As you may withdraw some of the companies operating in the Kurdistan region due to lack of payment of dues. " and attributed the al-Awadi, "remarks the Prime Minister, Nouri al-Maliki, recently, about the possibility of an economic collapse in Iraq, to the availability of his returns negative on the economic reality and the intention of those oil companies to withdraw from the country," Msttrda that "Prime The government does not have the confidence and the economic vision and deal with the collapse of the Iraqi economy discourse in the media without putting alternatives appropriate plans. " The oil giant Italian Eni (Eni), revealed in (the 25th of February 2014), of its intention to withdraw from Iraq unless the predicted Baghdad energy contracts outstanding own field of Zubair south of the country during the next two weeks, surprising not to sign those contracts six months ago, despite the lack of "no reason" to prevent this, before it approves Iraq on the same day to be held. mention that ENI is the second oil company, a major global threaten to withdraw from Iraq, as the newspaper reported the Financial Times Financial Times UK, specialized world's economic affairs, in, (the 24 of February 2014), that the future of British Petroleum, BP in Rumaila oilfield, in southern Iraq, "flawless risk" as a result of the actions "bureaucratic complex" faced by There the company, forcing it dispensed with the services of a contractor with 100, indicating that it is part of the "many challenges" faced by the major Western oil companies in Iraq threatens plans around the country, "ambition" to revive its oil industry. 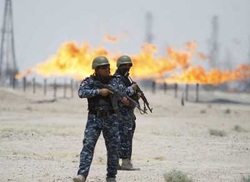 She said the Commission on oil and energy parliamentary that information has confirm the intent of many of the oil companies operating in the country to stop work because of bureaucracy and corruption in addition to the exposure of these companies to the demands of granting commission for facilitating the work by government figures influential, They pointed out that the absence of oil and gas law and the disadvantages of the investment law began pressure on the


giant oil companies during conducted work in the country.threatened the Italian oil company "Eni", the government last week that it will begin to prepare for departure within the next two weeks if you do not expect Baghdad contracts related to the development of Zubair oil field giant in the south of the country, and before that there was a threat Similarly by British Petroleum, "BP" to withdraw from the Rumaila oilfield with reserves enormous by what she bureaucratic complex hinder their work. said a member of the Oil and Energy Committee in the Parliament MP Mohammad Qasim said in an interview with "long", that "the information received by the our committee and correspondence confirms the intention of a number of international oil companies operating in Iraq to withdraw from work in Iraq, because of the bureaucratic and financial and administrative corruption in the institutions of the state and its ministry. "and explained that "there is harassment practiced against oil companies operating in the Ahdab field, specifically the Chinese company and before that was in the field Rumaila, "revealed the existence of interference in the work of these companies by influential elements." He favored the Kurdistan Alliance MP that "witnessing the 2014 withdrawals many of the oil companies operating in Iraq because of the problems faced by these companies is not only pertains to the deteriorating security but ill-treatment by Iraqi ministries with these companies. " and pointed out that "there are transactions entered into in order to get the so-called" commission "of the oil companies in a way and another," pointing out that some of the ministries dealing manner uncivilized with these companies when reviewed in order to Surfing some belongings. " noted a member of the Oil and Energy Committee that "the government bears full responsibility for withdrawals oil companies from Iraq," calling on the Baghdad government to "adopt the experience of the Kurdistan region in dealing with the oil companies to facilitate their dealings in the ministries and customs." and called on the government to exert more efforts in order to approve oil and gas law inactivated as well as amend the law on investment, "noting that" the investment law in the Kurdistan region is much better than the law of the federal government. " so said the other member of the Committee on Oil and Energy Awad al-Awadi said in an interview with the "long" yesterday that "all oil companies operating in Iraq are from major corporations and world that have to deal with all the oil-producing countries," pointing out that "these companies have facilities by these countries." added al-Awadi, that because of administrative procedures, strict and mismanagement, both at the level of the Council of Minister or the Ministry of Oil, as well as interventions by the government and the provinces cause a loss of confidence by these companies and the withdrawal from work. " MP on the mass of the Liberal government's handling matters and as quickly as possible, "pointing out that if there was a need to amend some laws should be amended, as well as about the need for the enactment of the oil and gas, which will all the problems facing the work of these companies. " and explained that "more than 70 international oil companies operating in Iraq and because of the problems between Erbil and Baghdad has withdrawn some of the companies operating in the Kurdistan region due to non-payment of dues" , noting that "the statistical precision for companies that threaten to leave is at the Ministry of Oil." and noted that "the prime minister's comments a few days ago about that Iraq is on the verge of economic collapse he had returns of negative economic reality as well as information about the intention of the withdrawal of these oil companies from Iraq , "explaining that" The prime minister has no confidence and economic vision and deal with the collapse of the Iraqi economy discourse in the media without putting appropriate plans and alternatives. "

Similar topics
» Representatives will sponsor the International Journalism Award for the detection of corruption and agree to hold a parliamentary-media-media protocol throughout the current session
» Learn about Parliament's vision of institutionalizing and fighting corruption
» Iraq is in talks with international companies to modernize its energy for oil
» Parliamentary Energy reveal the Kurdistan sell oil directly for US companies
» Because of the presence of 73 companies lost .. Committee on oil and energy parliamentary accuses the Ministry of Industry "failure"