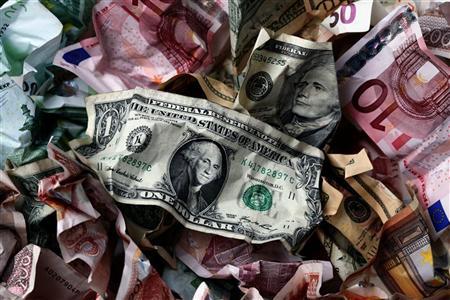 
NEW YORK (Reuters) - The euro is likely to post further losses in the coming week after it dropped on Friday to its lowest against the U.S. dollar in nearly 17 months and tumbled to an 11-year low versus the yen following a downgrade in credit ratings of nine euro zone countries.

As widely expected, Standard and Poor's said it has downgraded the credit ratings of euro zone countries led by France, Spain, Italy and Austria. S&P, however, left Germany's triple A rating unchanged, with a stable outlook.

Speculation about the downgrade roiled the currency market earlier in the session, and the actual ratings news provoked little market reaction.

But analysts said the more serious blow to the euro's cause was the breakdown in talks between Greece and its creditor banks to slash the country's huge debt. Greece has warned of "catastrophic" results if a deal to swap bonds is not reached soon.

"The downtrend in the euro is not complete and even though short positioning in the euro is at extreme level, not all segments of the investment community is short and so there is scope for further falls," said Richard Franulovich, senior currency strategist at Westpac in new York.

He sees the euro possibly hitting $1.25 by the end of next week, with a target of between $1.21-$1.22. "I suspect that Asia will sell the euro straight out of the gate on Sunday evening," Franulovich said.

The Westpac analyst also said with the breakdown in Greek talks, "Greece would probably be the first developed country to default in 60 years."

Once again, euro shorts hit a record of 155,195 contracts in the latest week, reaching all-time highs in four of the last five weeks.

The downgrade worries added to losses seen after Italy's three-year debt auction failed to match the success of a Spanish auction the previous day, reflecting the heavy refinancing load Rome faces over the next three months.

The downgrade "has been priced in for several weeks, but the market had been lulled into complacency over the holidays, and the new year began with a bounce in risk appetite, thanks partly to a good Spanish auction," said Samarjit Shankar, director of global FX strategy at BNY Mellon in Boston.

"But the Italian auction brought us back to earth and now we face the specter of further downgrades."

However, Brian Dolan, chief currency strategist at Forex.com in Bedminster, New Jersey thinks technicals could provide a floor for the euro in the short term. He said $1.26 marks the 76.4 percent retracement level of the broad move from below $1.19 to above $1.49. There were several bids earlier in the $1.26 area that served as support for the euro.

Investors are reluctant to enter into fresh long euro positions with so much uncertainty still surrounding the debt crisis and a precarious outlook for the euro zone economy.

Shaun Osborne, chief currency strategist at TD Securities in Toronto said the drivers of euro weakness are a lot more obvious this year than in 2010.

"For one thing, there is more juice to be squeezed out of ECB monetary policy," Osborne said. "We expect the main refi rate to fall below 1.00 percent to 0.50 percent in the next few months as ECB policymakers respond to a jarring recession and huge deleveraging in the euro zone."

Back at the first weekemd of the month I can across a news piece that was gving the breakdown of currency values for 2011,

The worst one was the Euro,

It looks as tho the slide just keeps going.
*****************
Being defeated is often a temporary condition. Giving up is what makes it permanent.
Marilyn Vos Savant

Page 1 of 1
Permissions in this forum:
You can reply to topics in this forum
Who is online?
In total there are 61 users online :: 0 Registered, 0 Hidden and 61 Guests :: 3 Bots