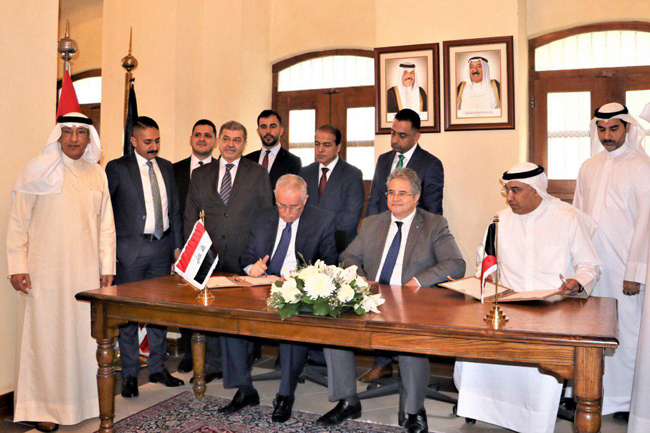 The Ministry of Foreign Affairs handed over to the Kuwaiti side the last batch of archives and the Emiri archive.

Undersecretary of the Ministry of Foreign Affairs for Legal Affairs and Multilateral Relations, Ambassador Hazem Al-Yousifi, headed the Iraqi delegation.The 200,000 books belonging to Kuwait University and the National Library were handed over on Sunday 27/10/2019 at Saud Al-Nasser Al-Sabah Diplomatic Institute.

Al-Yousifi explained that Iraq has handed over all Kuwaiti property found by the concerned authorities.

This is in compliance with relevant UN Security Council resolutions, the latest of which is resolution 2107 of 2013.

Welcoming Iraq’s continued demonstration of its commitment to the full implementation of its outstanding obligations under the relevant Chapter VII resolutions, namely the continuation of payment of the outstanding amount of compensation administered by the United Nations Compensation Commission, and both Iraq and Kuwait’s efforts to advance regional stability, and welcoming also all the positive steps that have been taken by the Government of Iraq to fulfil resolution 833 (1993),

Welcoming further the ongoing cooperation between Iraq and Kuwait in the search for missing Kuwaiti and third-country nationals within the framework of the Tripartite Commission and its Technical Subcommittee under the auspices of the International Committee of the Red Cross (ICRC), and the positive efforts by the Government of Iraq regarding the return of all Kuwaiti and third-country nationals or their remains, and the return of Kuwaiti property,

Reiterating the need for continued efforts to locate and repatriate missing Kuwaiti property, including the national archives, through the Iraqi interministerial committee established for this purpose,

Expressing its deep appreciation to the late Ambassador Yuli Vorontsov and Ambassador Gennady Tarasov, who in the capacity of High-level Coordinator, devoted their time and professional skills to carrying out the mandate outlined in paragraph 14 of resolution 1284 (1999) and ensuring that its implementation built trust between Iraq and Kuwait and contributed to the full normalization of their relations,

Noting that the mandate of the United Nations Assistance Mission for Iraq (UNAMI) includes advising, supporting, and assisting the Government of Iraq in facilitating regional dialogue, With consideration to the provisions of Chapter VI of the Charter of the United Nations on the pacific settlement of disputes,

2. Calls upon the Government of Iraq, in furtherance of its commitment to facilitate the repatriation of all Kuwaiti and third-country nationals referred to in paragraph 30 of resolution 687 (1991), to continue cooperation with the International Committee of the Red Cross (ICRC) by providing any information of such persons, facilitating the access of ICRC to all such persons wherever they might be and facilitating the search by ICRC for those Kuwaiti and third-country nationals or their remains still unaccounted for, and to continue efforts to search for missing Kuwaiti property, including the national archives, through its interministerial committee;

5. Expresses its intention to review the modalities of the reporting referred to in operative paragraph 4 of this resolution, upon the eventual termination of UNAMI’s mandate, with a view towards considering a continued role for the United Nations in such matters if needed;

6. Decides to remain seized of the matter.