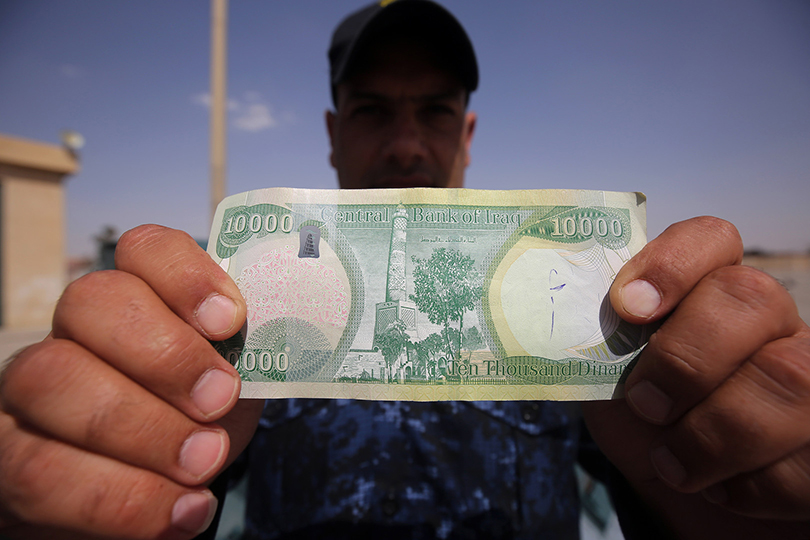 Dear all, We all know today that the problem of Iraq is not a political or security, but an economic problem, as most of the demands of the demonstrators are economic demands, and we all know the high rates of unemployment, especially among young people, and stop the Iraqi industry and the faltering of investment and slumber the private sector and sagging The administrative apparatus of the state, which depletes most of the huge budgets derived from the sole source of rent (oil), not to mention the bureaucracy and corruption.
In this case, the remedies should be real economic, not prosthetic, which in the medium term will make matters worse. In light of the government's urgent reforms in response to the October 1 demonstrations, all economic indicators lead to the same result. The state has burdens not to bear.
As experts in the field of economics, we see that there are two types of reforms that the government should take. The first is the short-term reforms aimed at absorbing the resentment of the unemployed. In this paper we are about short-term reforms, and long-term reforms are hardly devoid of a message or thesis or economic research published in Iraq after 2003 of treatments for this type of reforms, and in general can be addressed in a single article.

The measures announced by the government included, for the most part, the inclusion of thousands of unemployed in the already flaccid government apparatus, which will increase the burdens on the budget.The current spending of the total government revenues in the 2019 budget amounted to 90%. (105) trillion Iraqi dinars, while the current expenditure amounted to (95) trillion Iraqi dinars, and the remaining investment spending only (10%) Note that investment spending is developing countries, not current spending, so the government should seek quick ways outside the framework Government, but what are these ways?
Firstly. Revitalizing the Private Sector
When there is a functioning private sector, it can provide a huge number of job opportunities. We find that the answer revolves around two points, the first is that the private sector provides better job opportunities than the government sector and higher paid, and the second the existence of guarantees in the private sector are the same in the government sector, such as retirement and health insurance, and in Iraq issued the Labor and Social Security Law No. (37) 2015 which regulates it but is not activated.
On the other hand, increasing the credit provided to the private sector by the government will be a quantum leap in this sector, but the question is whether the government provided such credits or not? The answer is a lot provided, so the question is where did these credits go and why did the private sector develop? The answer is that credit provided to the private sector as a percentage of GDP rose to 9% in 2017 compared to 1% in 2004. The average growth rate during the period (2004-2017) was 27%. The average growth rate of industrial productivity for the same period was only (6%).
The development of the private sector will bring benefits that cannot be counted in this paper. The sale of currency through this window gradually and then increase the cash reserves, and thus the development of the private sector will solve many of the most difficult for decades, the most important of which is to reduce unemployment, reduce pressure on the government apparatus, reduce current expenditures, etc.
Therefore, the private sector does not need the government except the following:
- Let it work freely without interference and apply the principle (let it work let it pass).
- Activating the laws issued by the government concerning the private sector.
- Looking at the private sector as a partner, not a kind of public sector, as the public sector still views the private sector as paternalistic.
- Reconsidering the bureaucratic restrictions that stand as a stumbling block in the face of businessmen.
Second. Investment:
Investment is active when there is a favorable investment climate, and the investment climate is based on a set of pillars, the most important of which are the following:
- Investment Law: The Iraqi Investment Law is one of the best investment laws in the region, and there is no problem in this aspect.
- Transparency: For the purpose of obtaining an investment license in Iraq requires, at best, a full year, the investor faces shuttle tours between a large group of departments that use the highest degrees of bureaucracy and extortion, note that in the Arab Republic of Egypt you can get an investment license just one day. We believe that this is not difficult at all, it is possible that the Iraqi or foreign investor get an investment license within one week, only when we reconsider investment bodies and remove bureaucracy and use e-government that reduces cases of financial and administrative corruption to the extent possible.
Third. anti-Corruption:
Corruption is described in the literature of the economy as (pyramid) and may not be combated from below, as the cover will continue to work, but we have to remove the cover at the beginning, which will lead to the erosion and expose the rule that will stop automatically, but the question is there a political will to address corruption from The top of the pyramid? If this will exists, the subject of corruption will go irreversibly in less than one year, thus providing one of the most important pillars of growth and development.
We noticed through the dialogues (governmental and community) that followed the following demonstrations: Neither the government nor the demonstrators put their finger on the wound, the wound is low economic performance and poor management of public money, the problem is not financial, as Iraq is one of the rich countries, which has large reserves of cash and gold, In addition to the oil revenues that exceed (100) billion dollars annually, but the problem lies in the distribution of income among members of Iraqi society, we must all stand together today with practical measures to redistribute income and save the country from this crisis, and these measures lie in reviving the sector Your activation only Investing and fighting corruption scientifically.