Japanese Ambassador: Our economic support for Iraq is continuing

Japanese Ambassador: Our economic support for Iraq is continuing Japanese Ambassador to Iraq Naufumi Hashimoto said that economic relations between the two friendly countries are increasing continuously, stressing at the same time the steady position of his country in support of helping Iraq in all fields, especially economic and security.

Hashimoto said in a statement singled out by "morning": Iraq has a significant and important role in achieving peace in the region, and in this regard continues to cooperate with the Iraqi government in the fields of investment, culture and science alike.

"In 15 years, we have worked with Iraqi friends to help rebuild infrastructure and this cooperation will continue," he said.

It is noteworthy that the province of Basra is awaiting the completion of two large projects that will hopefully contribute to solving the water crisis in Basra and cover its needs until the year 2045, and financed by the Japanese loan, which is going within a specific timetable is expected to be completed by the end of October.

Meanwhile, the Japanese ambassador pointed to the completion of the project to rehabilitate the Mussayab thermal plant, which is one of the most important power plants in the country and will have a significant contribution to the production of energy in Iraq, noting that the Japanese government will continue its contribution to the reconstruction and support efforts towards Emaar Electricity Sector.

With regard to the work of Japanese companies in Iraq and specifically in the reconstruction of the liberated areas, Hashimoto pointed out that "Japan will make great strides in supporting Iraq, especially after the regions have witnessed a remarkable security stability."

Regarding the issuance of a visa for Iraqis to Japan for the first time from Baghdad after it was issued from the Jordanian capital Amman, the Japanese ambassador expressed his happiness to increase the demand for the visa, saying that this will strengthen relations between the two friendly peoples.

He pointed out that "most Iraqis have no idea about many places to visit in several areas of Japan, so the embassy will provide the necessary information for Iraqi tourism companies accredited in Baghdad .. The aim is to strengthen communication between the two countries in order to expand cooperation at various levels ".

It is noteworthy that the Japanese Embassy in Baghdad, on the occasion of the eightieth anniversary of the establishment of diplomatic relations between the two countries, recently organized the eleventh joint academic meeting at the Embassy of Japan, and witnessed the presentation of the results of recent academic events in the field of economy, education and archeology, to strengthen communication between professors and institutions in both countries to expand Scope of cooperation
Intellectual.

The Embassy of the Republic of Iraq in Tokyo held a seminar on the history and civilization of Iraq and on the Iraqi-Japanese relations in cooperation with the Japanese International Cooperation Agency (JICA), on the occasion of the 80th anniversary of the establishment of diplomatic relations between Iraq and Japan. In the presence of a number of representatives of diplomatic missions in Japan, representatives of Japanese companies, and former Japanese Ambassador to Iraq, Mr. Fumio Iwai, and a large number of Japanese interested in Iraqi civilization.

The Ambassador of the Republic of Iraq to Tokyo, Khalil Ismail Al-Moussawi, delivered a speech in which he welcomed the attendees, wishing Japan-Iraq relations further progress and prosperity. The experience of Japanese companies in Iraq, which began since the sixties of the last century, makes them participate smoothly in Iraqi projects without hindrance, where more than 28 vital strategic projects are funded by Japan since 2003 and this indicator Li said the two countries are moving towards activating economic partnership.

On the level of academic exchanges, the two countries have succeeded in the past few years in signing several memorandums of understanding and cooperation for academic and research exchange between Baghdad University, Mustansiriya University and a number of Japanese universities. And openness to the Japanese language and culture in Iraq. Professor Oguchi of the University of Kokushikan, the Center for the Study of Ancient Iraq, also gave an important and influential lecture on some of Nimrod's treasures in the historic city of Mosul, which was admired by the audience. 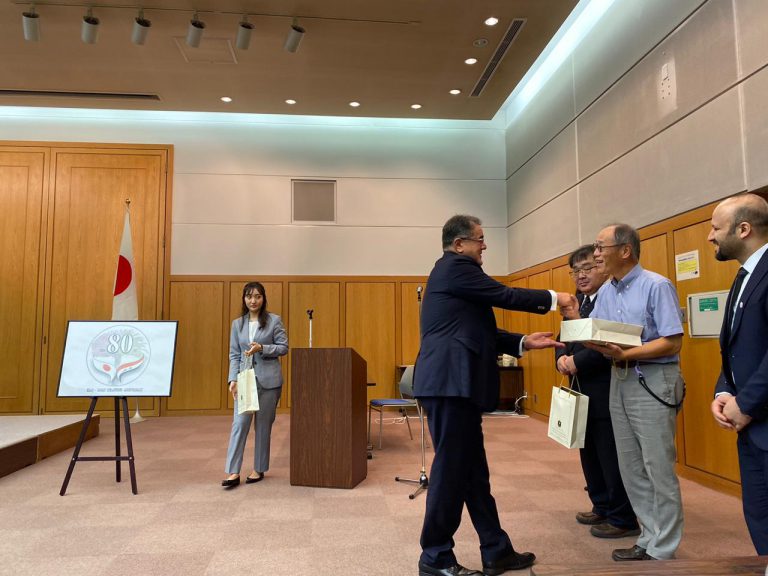