Turkish Foreign Minister Mouloud Zhaoshoglu will arrive in Iraq on Sunday for an official visit to Baghdad, Arbil and Basra, an informed source said Saturday.
"The Uglu visit will include the meeting with his counterpart Mohammed Ali al-Hakim to discuss the Turkish loan of 5 billion dollars for the reconstruction of the devastated areas because of the war against Daqash, in addition to discussing the issue of the Kurdistan Workers' Party with Iraqi officials," the source said.
He added that "Oglu will discuss during his visit to Erbil, the strengthening of bilateral relations between Turkey and the Kurdistan region, which saw a kind of decline after the referendum secession." Ending / 25

Turkish Foreign Minister Mouloud Gawishoglu announced on Sunday that his government is close to reopening its consulate in the province after a five-year closure, while President Recep Tayyip Erdogan is visiting Iraq.
"The Turkish government is determined to reopen the Turkish Consulate General in Basra," Oglu said during a meeting with a number of officials in Basra. "The opening will be soon."
He pointed out that "Turkey is working to develop its relationship with Iraq, and seeks to play a major role in its reconstruction," adding that "President Recep Tayyip Erdogan is going to visit Iraq soon, and Basra will be part of the program of the visit."
The Turkish government closed its consulate in Basra in mid-2014 and announced last year that it would open its consulate in Mosul. During a press conference held in Baghdad a few hours ago, it revealed Turkey's desire to open two consulates in Najaf and Karbala, Between the two countries.Finished 26 S.


BAGHDAD, Iraq — Turkey and Iraq emphasized the significance of strengthening border control and trade ties in a meeting on Sunday in Baghdad.

Iraq-Turkey trade volume stands at around $10 billion. However, Turkish President Recep Tayyip Erdogan told a press conference in March alongside his Iraqi counterpart Barham Salih they want to expand it.

"Let's increase it to $20 billion. We want to keep it at this level or even double it. We have the power to do this. The Turkish private sector is capable of revitalizing the Iraqi economy," Erdogan said.

Hakim described terrorism on the Iraq-Turkey border as an "important" part of their meeting.

"Iraq is strongly rejecting the use of its land for any military activities against Turkey," he said, referring to the nearly four-decade long cross border conflict between the Kurdistan Workers Party (PKK) and Turkish state.

Conflict between the PKK and Turkey is nearly a daily occurrence along the border.

Cavusoglu said Turkey and Iraq will need to cooperate to "eliminate PKK terrorist group as well."

Also on security, Hakim noted Iraq was plagued by a three-year battle against the Islamic State (ISIS), leaving areas the group had once controlled in ruins.

"We spoke of the importance of the reconstruction of areas damaged by conflict and the return of Iraqis back home," Hakim said.

During the ISIS takeover of Mosul in 2014, Turkey was forced to close its consulate and nearly 50 workers at the facility were taken captive by the group before they were released later that year.

Cavusoglu again reiterated, "we have plan to open a consulate in Basra, one in Kirkuk and one in Najaf," in addition to reopening their consulate in Mosul.

He echoed the sentiment that "trade barriers" between Iraq and Turkey "must be removed" for the interests of both sides.

Cavusoglu said Turkey and Turkish companies "are keen to taking part in the reconstruction of Iraq and that Turkey has been the best helping side for Iraq." Ankara has offered $5 billion in credit for Turkish companies rebuilding in Iraq.

Ankara and Baghdad have been at loggerheads over water as Turkey has threatened to stop its flow from the Tigris River into Iraq in order to fill its Ilisu Dam.

"Last year, there was a huge water crisis and problem. But this year was the year of compassion and blessings. This year we instead have the problem of flooding," he said.

Cavusoglu added Turkey would address the water problem with Iraq "so we do not face any potential drought crisis in the future."

Hakim hailed his Turkish counterpart's visit as "very crucial for increasing coordination and strengthening friendship" between Ankara and Baghdad.

The Turkish foreign minister added his next two stops will be in Basra and Erbil. 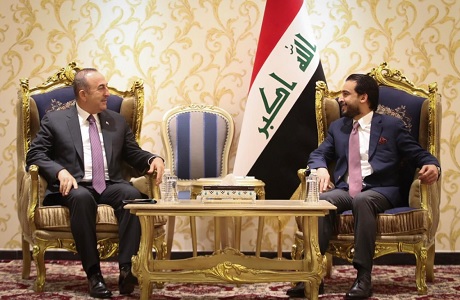 According to Halbousi’s office they discussed entry visas, economic relations, and humanitarian cooperation, focusing on the return of displaced people and the stabilization of areas liberated from ISIS.

Halbousi stressed the importance of respecting mutual sovereignty and said Iraq rejects the use of its territory by opposition groups.

Although he did not mention any group by name, Halbousi was likely referring to the PKK.

Turkey has repeatedly launched airstrikes and sent troops into the Kurdistan Region and areas of northern Iraq to target PKK positions. Iraq and the Kurdistan Regional Government have criticized Turkey for violating their sovereignty, but have also called on the PKK to withdraw.

Halbousi and Cavusoglu also discussed the regional water crisis and the formation of joint committees to solve the water problem and to exchange expertise.