The Minister of Planning Nuri al-Dulaimi, on Sunday, German expertise to contribute to investment projects in the liberated areas, while the German ambassador to Baghdad Cyril Nun on the upcoming visit to the German Minister of Economy Peter Altmayer to Iraq.

"The Minister of Planning Nuri al-Dulaimi received the German Ambassador to Iraq Cyril Nun, and discussed increasing international support for reconstruction projects and stability, and contribute to sustainable development projects to support the private sector," the Ministry of Planning said in a statement.

Al-Dulaimi called for "German expertise to contribute to investment projects, especially in the liberated areas, which have been extensively destroyed in its infrastructure." He stressed the importance of establishing a German support group, which is the nucleus of an international group, , And provide international advice to develop the work of the private sector.

For his part, Ambassador Nun said, "a prospective visit to the German Minister of Economy of Iraq accompanied by a delegation of specialized businessmen."

The President of the Republic Barham Salih, on 5 December 2018 has stressed the need for the participation of German companies to develop infrastructure and strengthen the Iraqi economy, pointing to the importance of Germany's contribution to the reconstruction process.

The Minister of Planning, Dr. Nouri Sabah al-Dulaimi, received on Sunday the German Ambassador to Iraq Cyril Nun and his accompanying delegation. The meeting discussed increasing international support for reconstruction and stability projects and contributing to sustainable development projects to support the private sector. Dr. Nouri al-Dulaimi called on the German expertise to contribute to investment projects, particularly in the liberated areas, which were heavily damaged in its infrastructure. He pointed to the importance of unifying and strengthening efforts with the Iraqi government in all possible fields. , Which is the nucleus of an international group that works to support government work projects in various sectors and provide international advice to develop the work of the private sector.

The Minister of Planning, Dr. Nouri Sabah al-Dulaimi, received on Sunday the German Ambassador to Iraq Cyril Nun and his accompanying delegation. The meeting discussed increasing international support for reconstruction and stability projects and contributing to sustainable development projects to support the private sector.
The face of Dr. Nuri al - Dulaimi , his call during the meeting, the German expertise to contribute to the investment projects, especially in the liberated areas , which suffered extensive damage in their infrastructure, he said , referring to the importance of the consolidation and strengthening of efforts with the Iraqi government in all areas Almemknh.daia
to the importance of establishing a support group of German , Which is the nucleus of an international group that works to support government work projects in various sectors and provide international advice to develop the work of the private sector.
For his part, Ambassador Nun praised the efforts of the Minister of Planning, in terms of joint work with foreign investments and providing facilities for them, announcing the upcoming visit of the Minister of Economy of Germany to Iraq accompanied by a delegation of specialized businessmen. 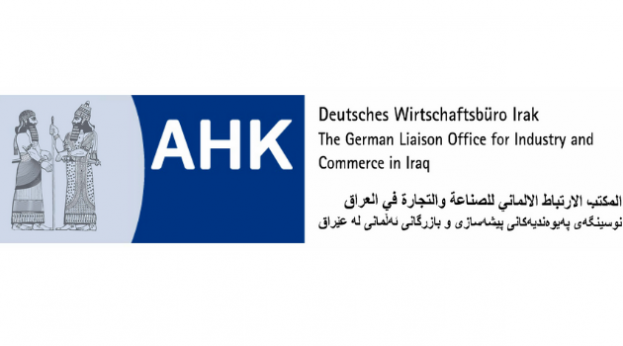 IBBC signs Memorandum of Understanding with the German Liaison Office for Commerce & Industry
The Iraq Britain Business Council (IBBC) and the German Liaison Office for Industry and Commerce in Iraq (DWI) have signed a Memorandum of Understanding (MoU) to increase cooperation between the organisations to support and grow trade between the UK, Europe and Iraq.
The cooperation will involve reciprocatory promotion of events, the organising of joint events and invitation to major events.
The German Liaison Office for Industry and Commerce in Iraq (DWI) Baghdad and Erbil is the representative office of the German economy in Iraq and accomplishes the tasks of the German Chamber of Commerce (AHK). It was founded in 2010 and is funded by the Federal Ministry for Economic Affairs and Energy (BMWi) of the Federal Republic of Germany. They currently support about 600 companies, among them about 30 German company branches working in Iraq or in the autonomous region of Kurdistan. In addition to representing the interests of German companies, he German Liaison Office for Industry and Commerce in Iraq supports the economic exchange between Iraq and Germany.
IBBC is delighted to have signed this Memorandum of Understanding, which further boosts our growing international network for the benefit of our members and the people of Iraq.
For more information on DWI, visit: http://irak.ahk.de/en/about-us/
You can see the full list of IBBC partners here.
(Source : IBBC )

The Secretary General of the Council of Ministers received Dr. Mehdi Alalak German Ambassador to Iraq Dr. Cyril Nan to discuss the details of the agenda of the next meeting of the team to restore stability, and set a date for the meeting of the working group on the stability of donor countries in April next, and the policies of the work plan and financial allocations, as well as the preparation of terms of reference to form a committee to follow up the file re Stability after 2019.
The German ambassador, in cooperation with the Iraqi government, called for the creation of all conditions and conditions that guarantee the achievement of a dignified and safe living in the Sinjar district, referring to the intention of the German government adviser for religious affairs to visit the judiciary in the coming period as an initiative to promote peaceful coexistence.
In the same context, the parties discussed the file of contribution to the reconstruction of Iraq, where the Secretary-General to allocate $ 36 million from the federal budget for 2019 to support this file.
Germany is the second largest humanitarian donor to Iraq, with the German Foreign Ministry supporting more than 500 million euros in the past three years.