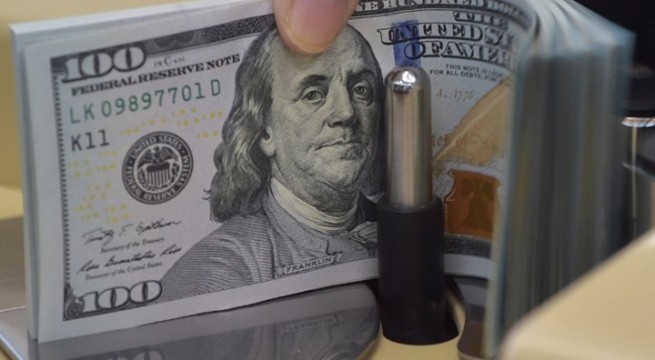 The central bank is no basis in the financial and economic reform a country, and as they say is the home of disease , So seek all countries of the world towards the preservation of this important institution away from the abusers and influential, so note in the various economically stable countries special attention to national Balbannok, led by central banks.

According to what is stated in these documents, the central bank adopted an open door policy for communicating with private banks licensed companies, remittance companies and broker in the sale and purchase of foreign currencies, in order to overcome the obstacles and the elimination of bureaucratic phenomena and to prevent exploitation and favoritism, and to help build a banking and financial sector decently. 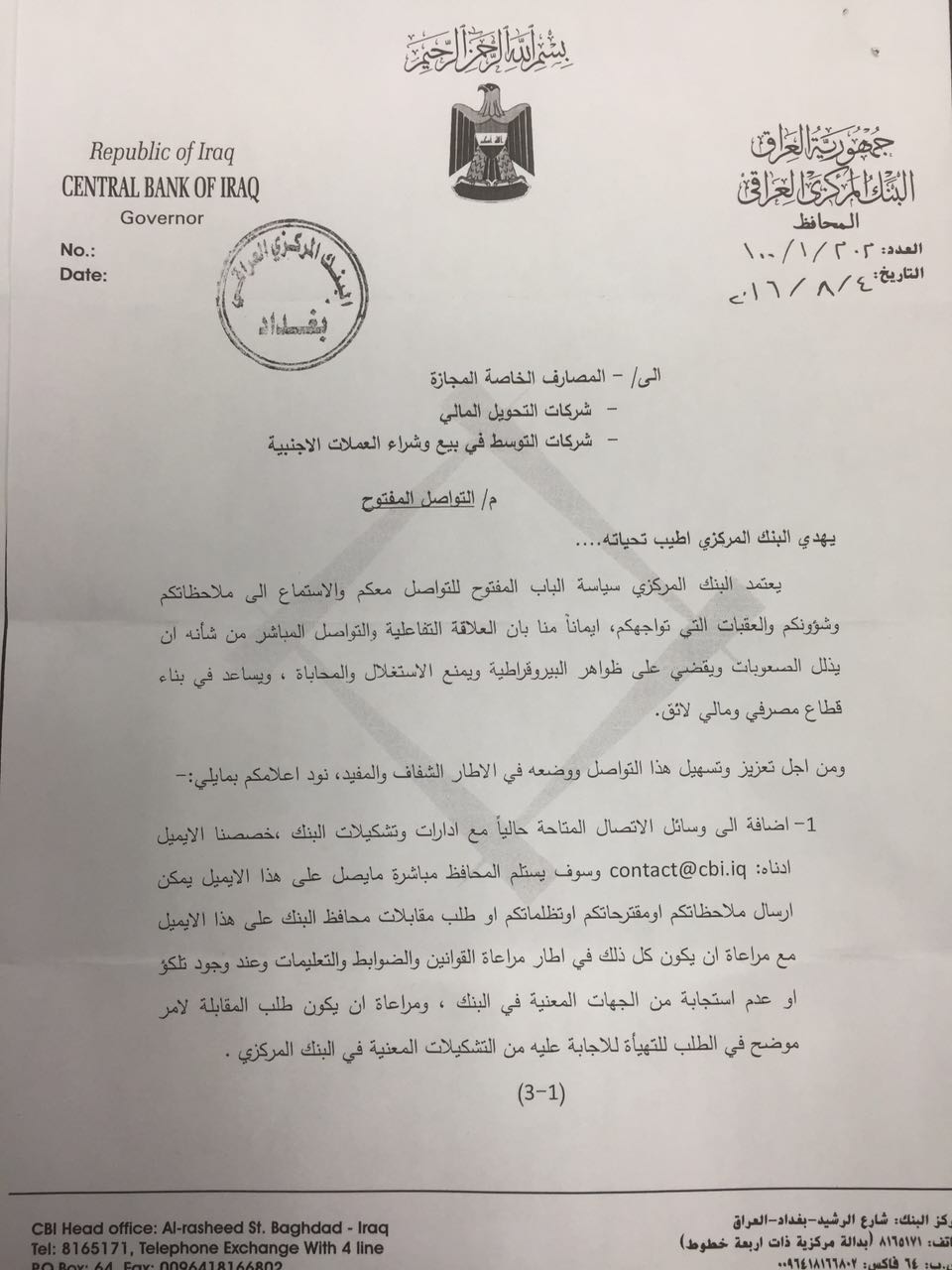 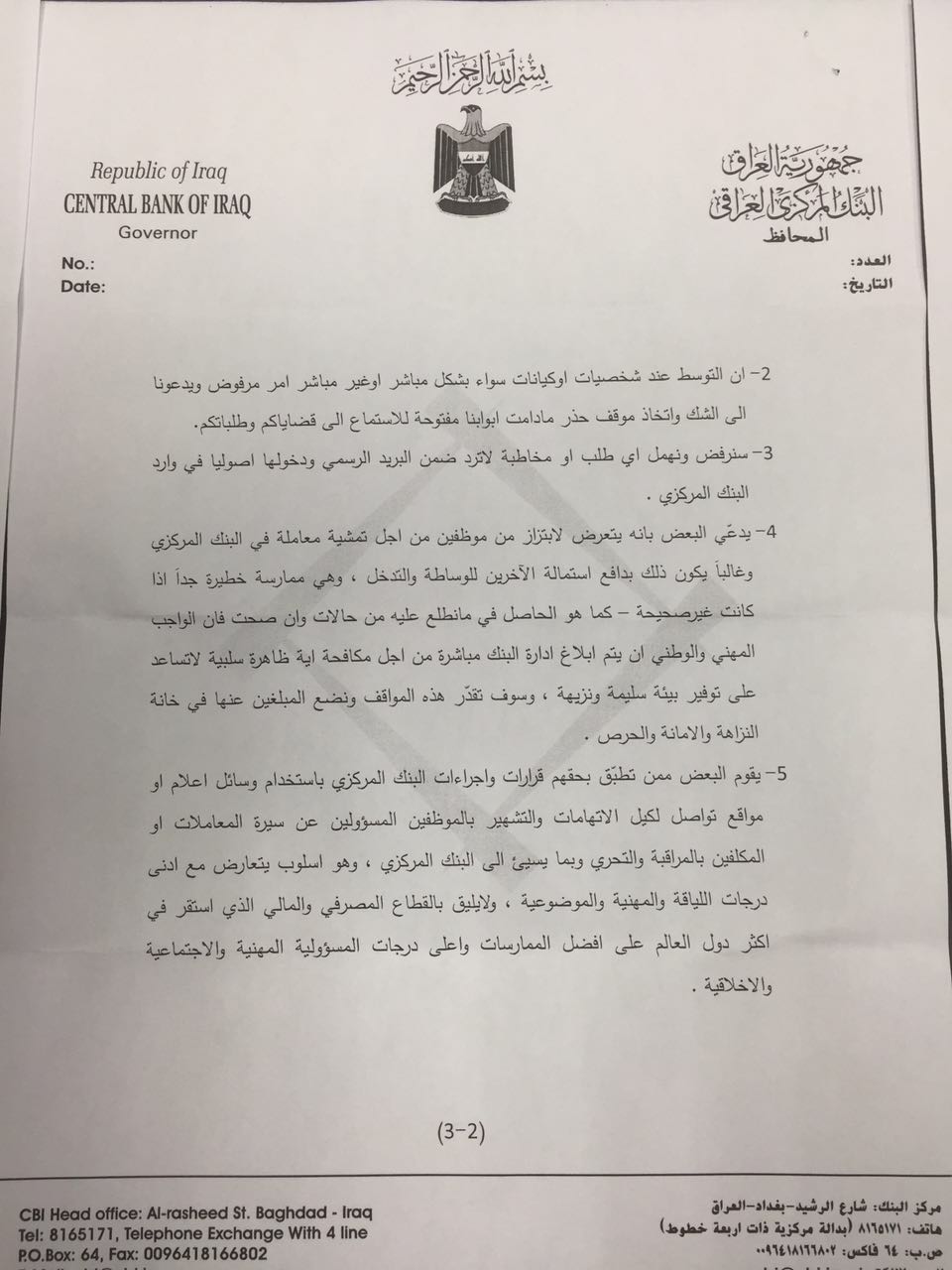 In common sense toward reform first action will be to fight all forms of corruption, and reduce its spread, and not to leave the corruption and abuses and to issue regulations and decisions that may be "ink on paper", as well as surfacing questions; who will implement these decisions? Are they themselves conniving and corruption have contributed to the operations ?? Intuitive are all questions do not need a lot of business acumen to ask !!

What is important is not the resolutions, regulations and documents, but what will result from this instruction of commitment and control by the authorities concerned and tracking the implementation of the provisions in order to be a real meaning of the text.

The central bank powers to financial institutions and bodies, and banks charge to be more open and more control over these institutions and monitor all their work, and in particular the money is moving out of Iraq, in order not to be a window for operations and suspicious transactions, and service of corruption and the owners of the money.

Also must adjust the auction of foreign currency, control of Iraqi funds that have disappeared over the auction currency in accordance with the fake contracts, but this requires a concerted effort in Iraq and abroad.

Here economists indicates that it is time to track corruption in Iraq and punish the corrupt, and the application of the method adopted in South Korea; imposed fines on corrupt officials is equal to six times the amount taken.

Financial excesses that the Central Bank of Iraq affected many incalculable Once an article, but it is dubious is the silence of government puts the index at the Observer that the parties and political figures and influential individuals involved in these processes, Banks, for example, constitute interfaces to the politicians and the corrupt, and the auction of the currency service for certain characters, as previously We mentioned that the corruption in all aspects of the state and not the central bank.

CBI demands of today's major role towards the country that suffer a major economic crisis, as the largest financial institutions in the country, and the need to regulate financial matters, and here the government should be more serious in dealing with any irregularities in the Bank's work in order to be to serve the country and not the powerful and corrupt , the central bank, at every country in the world is the house of the homeland and the citizen's money, citizen does not need flowery phrases about the reform and opening up, but need practical measures on the ground and in concrete terms.

Re: Central Bank of Iraq and the need for reform

Why isn't the CBI talking about the RV like the Guru's are?