President Barham Saleh and the US special envoy to Syria discussed international support to enhance security and stability in Iraq, the presidency said Thursday.

"President Barham Salih received at the Peace Palace in Baghdad on Thursday US Special Envoy to Syria James Jeffrey and US Ambassador to Iraq Matthew Teuler and their accompanying delegation," the presidency said in a statement received by Alsumaria News.

She added that "during the meeting, discussed international support to strengthen the security and stability of Iraq and achieve the required reforms, and stressed the importance of developing bilateral relations and expand the horizons of cooperation and trade exchange between the two countries to serve common interests."

"They reviewed the latest developments in Syria and the events in the region and the need to consolidate international peace and security." 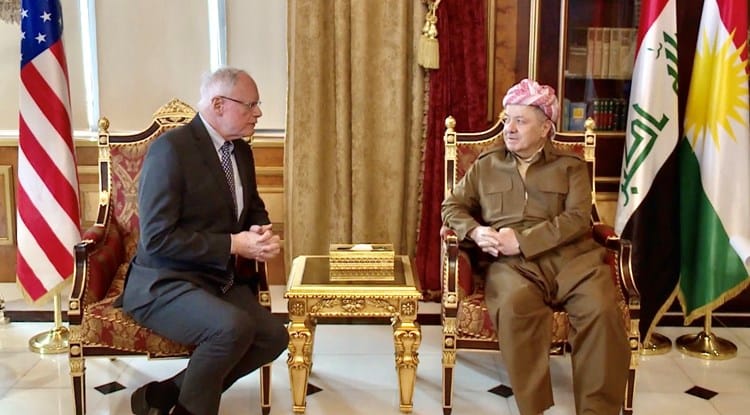 , the leader of the Kurdistan Democratic Party, Masoud Barzani, and the US special envoy for Syria, James Jeffrey, on Saturday expressed their concern about the increase in violence and the deterioration of stability in Iraq.

The media office of the leader of the Democratic Party, in a statement received by / Mawazine News / a copy of it, stated that "Barzani received, in Salah al-Din, James Jeffrey, the American special envoy for Syria, and the accompanying delegation that included, Steve Fakin, the American consul in Erbil, and General Eric Hill is the commander of US forces in Syria, and a number of military and political advisers to the US State Department.

The US special envoy for Syria praised the "progress and stability prevailing in the Kurdistan region," stressing "the strengthening of his country's relations with the region."

The envoy directed, "My condolences and sympathy to President Barzani and the people of Kurdistan on the occasion of the martyrdom of a constellation of Peshmerga as a result of the recent terrorist attacks of ISIS."

In another aspect of the meeting, the two sides stressed "the need for coordination and joint action between the US military and the Peshmerga forces in the war against the terrorist ISIS."

With regard to the political situation, the recent changes in Iraq and the demands of the demonstrators, it was another focus of the meeting, and the two sides expressed their "deep concern about the increase in violence and the deterioration of stability in Iraq and their impact on the reorganization of ISIS to its ranks and increasing its risks and threats."

Also at the same meeting, the latest field variables and equations in northeastern Syria were discussed, and emphasis was placed on preventing any demographic change in the region, and preventing the Kurds in Syria from being exposed again to tragedies, woes and migration.

Regarding the situation in West Kurdistan, the US President's Special Envoy for Syria announced that they "need advice and assistance from President Barzani."