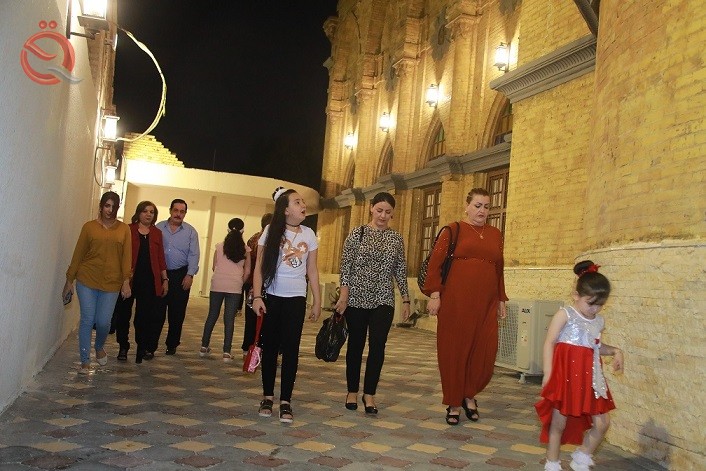 The Central Bank and the Association of Iraqi Private Banks opened the Church of the Virgin Mary in the governorate of Basra after being rehabilitated within the Tamkeen Community Initiatives project.
The opening was attended by a representative of the Governor of the Central Bank and the delegation of the Association of Iraqi private banks and representatives of branches of banks in the province of Basra and a number of personalities in the province.
The President of the Association of Iraqi Private Banks, Wadih al-Hanalal, said in a video speech during the opening ceremony that "the Central Bank and the Association of Private Banks, out of their responsibilities to the community, to support our brothers Christ starting in 2014 after being subjected to the worst brutal practices on In the province of Nineveh dear, through the launch of the campaign of our people, which allocated part of its funds to provide food and drink and blankets and cooling and adaptation and other camps for displaced Christians, and moved to the capital Baghdad and we rehabilitated the oldest church in a record time, and today Crave here to provide support to our brothers of Christ in southern Iraq through the rehabilitation of this church.
He pointed out that "the Tamkeen Fund has allocated 850 million dinars without any interest or profits. We have started lending to support the projects in the Nineveh Plain, which is the historical home of our brothers Christ, urging them to stay in their homeland and encouraging emigrants to return. Because we are very keen to create coexistence and peace among our people. "
He pointed out that the Association of Iraqi Private Banks continues to play its great role in supporting the banking sector and developing the human capabilities working in it, in addition to supporting the community through cultural, humanitarian and service initiatives.
For his part, the representative of the Central Bank Governor, a member of the Board of Directors Walid Eidi, said that "the Central Bank and the participation of the Association of Iraqi private banks started the rehabilitation of this church, which is one of the oldest churches in Basra, which is more than one hundred years as part of the religious heritage of Iraqi society and to decline State of peaceful coexistence between all segments of the population. "
"The project Tamkeen, which is supervised by the Central Bank and the participation of the Association of Iraqi private banks has been working to provide job opportunities for unemployed youth and support for charitable and humanitarian organizations working in the country and the revival of vegetation in all Iraqi provinces where the project was planted 10,000 seedlings in the province of Diwaniyah As well as the restoration of the oldest church in the capital Baghdad in the field. "
"We extend our sincere thanks to the Central Bank, the Association of Iraqi Private Banks and all those who contributed to the rehabilitation of the cathedral building," said Archbishop Imad Al-Bina, Bishop of the Chaldean Church in Basra. "This initiative shows that it is a message to the world. Gather around one piece in Basra.
It is noteworthy that the Church of the Virgin Mary Chaldean foundation was laid in 1907 and opened in 1930, the church is built Gothic style and designed by Italian artists in a cross and turned the church to the Cathedral in 1954.

Re: Rehabilitation of the Church of the Virgin Mary in the province of Basra within the Tamkeen project for community initiatives

What about poor people? Does central bank help people in need?

Re: Rehabilitation of the Church of the Virgin Mary in the province of Basra within the Tamkeen project for community initiatives

The problem with many churches is that they are just too much. There’s too much fuss going on, and it’s difficult to notice the thing's original purpose.
Many people convert to some newer denominations like baptism or Pentecostalism. People there at least read the actual Bible and discuss things. If you don’t agree with something, you can always go somewhere else. Still, the most important thing is that you can think with your own brain and make your own decisions instead of just relying on someone else’s opinion. This often happens in the Eastern Orthodox Church: many people who consider themselves orthodox Christians don’t even know who Jesus was.

Similar topics
» Completion of the rehabilitation of the Virgin Mary Church of the Armenians Orthodox in Baghdad
» President of the Association of Iraqi Private Banks visiting the Church of the Virgin Mary accompanied by Austrian Member of Parliament Omar Al-Rawi
» Governor of the Bank: The amounts provided by the Tamkeen initiative helped to carry out investment projects
» The experience of private banks in community service (Tamkeen Fund as a model)
» Launch of the Baghdad International Book Fair