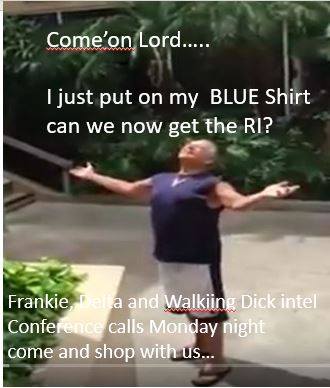 Everyone, please thank Frank for allowing the Monday night Conference Call transcription to be posted here. This is NOT word for word... (but as the call progressed... it became nearly word for word, as it got more and more EXCITING!!) ~ Sunkissed

I DID NOT TRANSCRIBE THE MANY TIMES THAT FRANK STATED THAT THIS CALL WAS IN HIS OPINION AND HE CERTAINLY HAS A RIGHT TO HIS OPINION.

Walkingstick’s firm (he is no longer working for the firm). He even told me recently, you see why I didn’t want to tell anybody that I have cancer. I love him and respect him. Frank went on to discuss his great honor, respect, and loyalty for Walkingstick and how deeply offended and hurt he is (for his good friend) that people question his illness.

WS is still associated with the firm. No salary. Only goal is to survive cancer right now. Because of the soldier that he is and our relationship, he doesn’t want anyone left behind on any beach that we conquer. So he receives these files and he only shares them with me when he feels it is appropriate to do so. So here we go……

WS firm has about 500-600 employees. For the past several weeks they have been coming to their boss and asking questions about their pay. So you can imagine an Iraqi citizen that works for the boss because he just got a paycheck.

Roll-play…. Got paid dinars not USD. CBI tells citizens that currency will soon have Purchasing Power so doesn’t want to put dinars in the bank. Also tell the citizens that the dinars they keep will co-exist with what they call New Small Category Notes and coins.. and gold.

WS firm has been told the same thing by the CBI. Word on the street and meetings say dinars will soon have value.

Question: Pay in dinars on check. But where can he get the New Small Category Notes, because they will have more value? I am patient because my Holy Man told me. F26 reminds that Mahdi is only temporary and Abadi will take over at the correct time.

Article: Sistani the Holy Man… (article is sideways on phone): Post 25 in today’s thread (03-18-19). Sadr, is preparing for a smooth coup on Mahdi because he failed and threw his papers into the hand of Iran. Rumors. Mahdi is going to stick around.

Citizens LOVE Abadi. They want him back. Even the Holy Man is telling the citizens they are getting their smalls and coins.

We told you these things would happen!

Citizens only want to know where and when they can pick up their New Small Category Notes. Managers in the banks “don’t know” Firms “don’t know” — only 2-3 people know. Maybe Fab4.

Talks about the second set of books paying 1:1 (as he has carefully taught us through repetition throughout this past year)

Role Play: I am being paid electronically. I am only getting dinars. I will soon be receiving the new Security (interrupts himself again) By the way! These new Small Category Notes Mr. Boss? Me, Iraqi citizen, I go to a bank or ATM machine to pick them up?

Here’s what you do, says the Firm to the Iraqi Citizen: Go to your banks.

Then laughs.. Why not? Our Teams did! (laughing) We’re done with that shit.

WS Firm is telling the citizens, Go to our banks.

Making fun of the chat comments, saying: “I gave you the combination to the safe” - and the chat people are saying “Give me more! Give me more!” (it's never satisfactory)

Go to your bank, is the gist. That’s the powerful part right now. And sure enough… the citizens are pouring into the banks.

Roll-Play: Where can I get New Small Category Notes? We’re going to be handing them out to you as soon as the CBI gives them to us.

Which we already proved to you on our last Monday Conference Call, with our Firefly.

All these companies and bosses are sending their employees to their banks, where they’re all getting the same story that Tank got for us last week.

Walkingstick’s Firm… comprises of 5 to 6 provinces of citizens in Iraq that work at WS Firm. These are the employees asking the questions: When? And Where will they be paid in the New Small Category Notes.

When? Don’t know yet. We do know it’s this year. He told us.

Where? At the banks electronically or at the ATM machines. They will educate you. It is part of the education that belongs to you. There’s a big article coming out that will be given to you. All the information will be on billboards inside and outside of the banks of Iraq.

Ladies and Gentlemen, they have been receiving the answers to their questions over a period of time EXACTLY the way we told you that it would happen.

The answer that was given to these hundreds and hundreds of employees, not just Walkingstick’s Firm, but other firms of employees going into the banks, asking them “You promised me!”

You will receive them, when the CBI makes the New Small Category Notes available to us, private banks, Hadeem Rasheed and Trade Bank, in Iraq. You will pick them up PHYSICALLY in a bank, or electronically through a card, or the ATMs.

That’s the answer they got. And by the way, this has been going on for weeks.

What we call Article #2 from the CBI to the citizens is actually being projected into the knowledge and understanding of the reinstatement directly to the citizens RIGHT NOW, with no fear, with no regrets, especially no denial that the New Small Category Notes are not going to come out. If anything, it is an explanation, that they are soon to come out to the citizens of Iraq where it must not fail.

The education, the public knowledge to the international world already has been well established, and well received, and DELIVERED, seven of seven.

Take 10 seconds, clear your thoughts… now the end of the conference call:

Frank holds up a Hawaiian Juice and smiles into the camera. Nobody’s caught on Tink.

Remember the contracts that were presented to us on December 28, 2018, in the afternoon hours. Those were 30, 45, 60, and 90 day contracts. They paid for the 30-day contracts. The more recent contracts on the 30 and 60 days have just been cancelled.

This “road” that these contracts were rewritten, we control that road. They were written in the same manner as the ones on December 28, to be paid in USDs, or the equivalent IQDs with the exchange rate.

They rewrote these that were in the 200,000 range. Well these were in the 300,000. Now, when they changed them, last week, WS firms lawyers got involved, in the rewriting of the contracts. And what it boils down to is they use the wording in the contracts they have received to guarantee 1:1.

The contract says very plain and simple: for example a $300,000 USD contract, when they pay us (WS firm) it is to be paid equivalent value of IQDs.

These new rewritten contracts that still contain a 1:1 rate, are due to be paid to us in the next 5 days.

They did all of the experimenting on the Second Set of Books, it’s their eyes, it’s their books, they do it, whatever it was, fine. fine. Fine. fine.

The last time 300,000 American Dollar contract, and if they pay us in 300,000 dinars, then that’s a 1:1. We don’t want to be ripped off, lied to, etc. contract verbiage has changed. And in 5 days, they’re going to pay our Axx! And the only way is if they made a change in their exchange rate, or, if they have just kicked the can down the road, for another week.

We shall know by Friday.

Will there be a Team Chat on Friday? IDK. If we can share on Friday, it will be there for you. Probably cancel Saturday Q & A. Then when we get together next Monday, I will share it with everyone else, if I am allowed to.

These new contracts, Walkingstick says, they are going to determine, to tell us, if they are at 1:1.

WS: We suspected the first set of contracts, on Dec 28, that we would be paid at 1:1 because of the way it was written. And when they paid us in dinars, we realized they were working on their second set of books, to pay us at 1:1. Everything has to be tested. It was successful.

With the cancelation of these contracts, and the rewriting of them, well there’s no doubt, yeah, we trapped them. We SEALED IT! For the rate to uh, show itself to us.

Or they simply don’t care about the public knowledge of the reinstatement of their currency.
Everybody knows what they’re doing.

This financial action, is in the contract, is in the pay of the citizens that work for Walkingstick’s firm. For all his companies. For all the citizens getting paid. And it’s not a mathematical mistake.

It is the reinstatement of the IQD, in the change of their exchange rate. And they will tell you when it’s official and when it’s done. As much as you can see and transparently right through it, as if it was casper the ghost.

This reinstatement feels so close, you know why Family? Because it’s not a secret.

And that’s your conference call for tonight.

Trust me… I’ve got another file right here that we can go over. I’ve expended a lot of emotion and energy. I pray we put this together for you properly and you understand it.

We truly are blessed. We know what we are talking about.

This is colossal news.

Notice that we are looking for the END of this study.