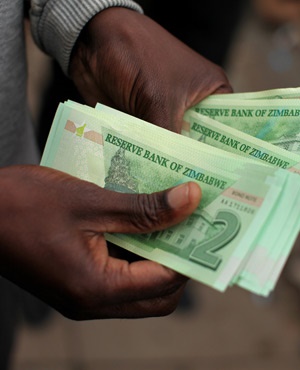 Harare - "This is a fact: Zimbabwe has the strongest currency in Africa".

Sounds unbelievable - but that's what the official Herald newspaper claimed on Wednesday, hours after President Robert Mugabe resolutely avoided the vexed topic of bond notes in his State of the Nation Address (SONA).

The central bank insists this surrogate currency is backed by a 200 million US dollar loan from Afrexim Bank. But many fear the notes will drag Zimbabwe back to the dark days of hyperinflation that reached a peak around 2006-2008.

Long bank queues have not improved since the notes were introduced. That is partly to do with the fact that teachers have just been paid and are having to queue repeatedly because of capped daily bank withdrawals.

The Herald claimed that Mugabe's speech to parliament showed the economy was on the "recovery path". Tweeted former education minister David Coltart: "Cd someone plse show me where that path is becos all I can see is bond notes?"