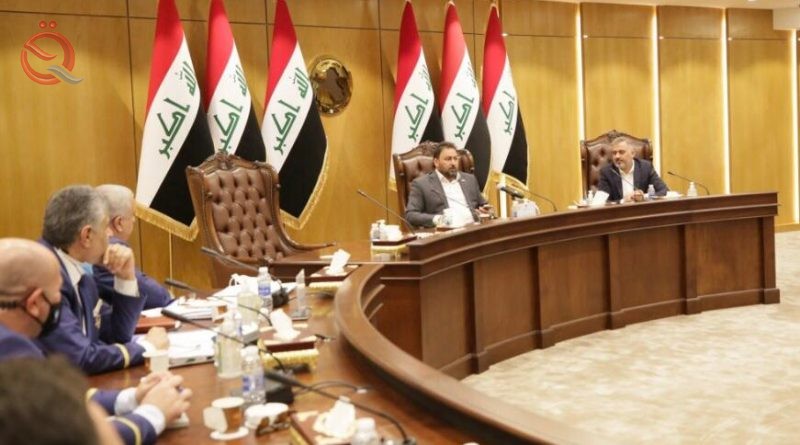 
The First Deputy Speaker of Parliament, Hassan Al-Kaabi, confirmed, on Sunday, that the national technical cadres are the basis for building the state and the continued reliance on foreign cadres does not harm the interest of Iraq.
The media office of the first deputy stated, in a statement received by "Al-Eqtisad News", that "Al-Kaabi hosted the Director General of the Iraqi Air Navigation Company and the company's board of directors to discuss the Iraqi airspace management file and review the capabilities and capabilities of the national cadres to manage the aforementioned file."
Al-Kaabi said, during the hosting, which is the second with the company’s officials, according to the statement, “Some, unfortunately, are constantly questioning the capabilities of national competencies and workers in various sectors, including airspace management, although the near and far testify that Iraqis are the main pioneers in the Middle East region in The aviation and airspace sector, but they helped many countries to establish bodies and companies in this regard. "
He praised, "the relentless efforts made by the national cadres working in the Iraqi company to restart the radar system for the western region and add it to the airspace, after it was outside it under the management of the British company (Serco)."
He added, "The National Administration has succeeded in maximizing financial imports to the state treasury, amounting to more than (7) billion Iraqi dinars during the first four months of this year, as well as enabling them to add more than (100) aircraft crossing Iraqi airspace daily, and this is an achievement that is counted for them."
He noted, "The House of Representatives had previously formally requested from the Council of Ministers not to proceed with the renewal of the contract concluded with the aforementioned British company, which ended on 12/31/2020, and the national cadres took over immediately the place of the experts of the foreign company and succeeded in managing this file, without Any technical or administrative obstacles, relying on the accumulated experience and the Iraqi technical competencies whose expertise is no less than any international expertise, which was working at the time of the contract with the British company (Serco). "
Al-Kaabi called on the Ministry of Transport and the government to "rely on the national cadres in this company and all government institutions because of their benefits and advantages, including developing expertise and preserving Iraq's resources, as foreign companies cost huge sums of money unlike managing them locally."

Similar topics
» Oil Minister: Exxon Mobil employees' withdrawal is unacceptable or justified
» The Minister of Planning discusses with the First Deputy Speaker of the Parliament the mechanisms of supporting and empowering the private sector and encouraging small and medium enterprises
» Alia Nassif: The events of last night are one of the repercussions of the state of fragmentation at the expense of the national interest
» His Holiness, Pope Francis, receives His Excellency the Minister of Foreign Affairs, Fouad Hussein, in the Vatican City State Building
» Al-Rasheed determines the interest of building maintenance loans and housing units