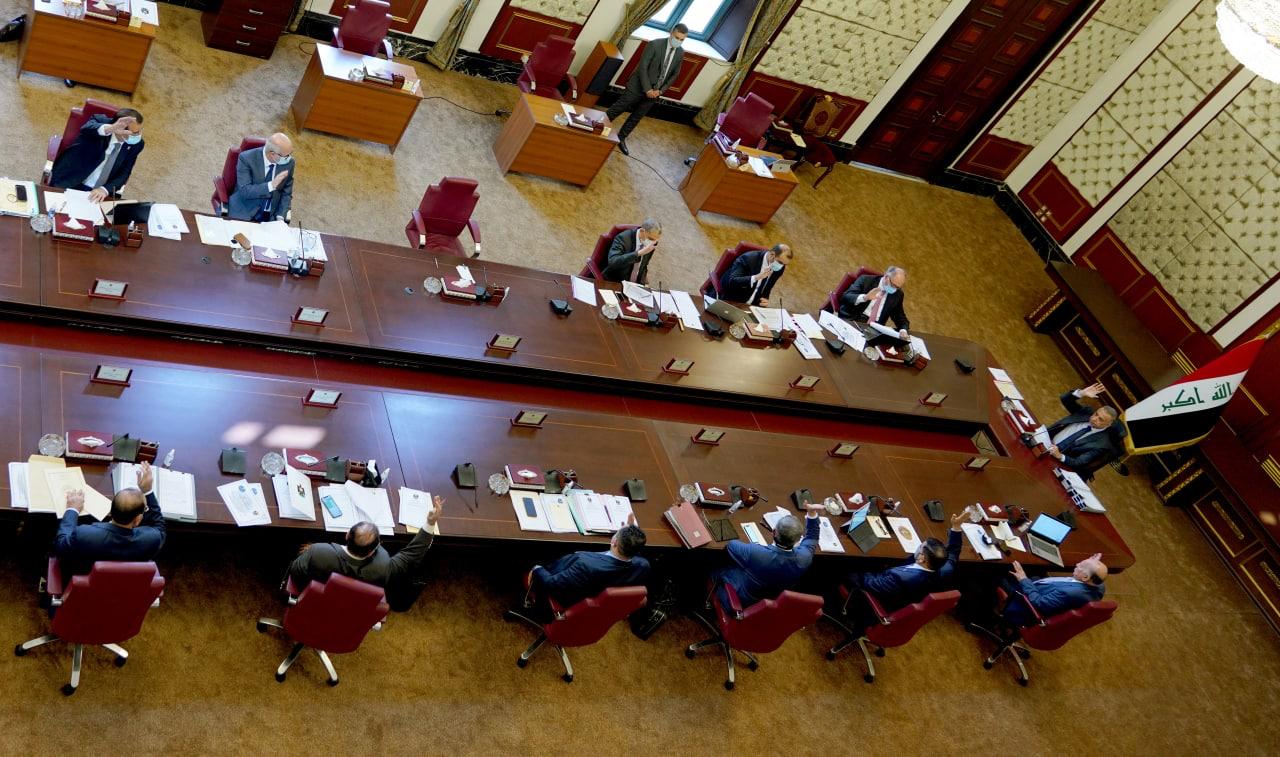 Shafaq News / On Tuesday, Mustafa Al-Kazemi, Prime Minister, chaired a regular session of the Council of Ministers, in which he discussed the latest developments in the country, and discussed the topics included in the agenda, during which a number of new decisions were taken.


Al-Kazemi's office stated in a statement received by Shafaq News, that the cabinet session witnessed the hosting of the head of the Independent High Electoral Commission, as he reviewed the ongoing preparations by the Commission for the upcoming elections, and the necessary measures that it has taken, and in this regard, the Cabinet issued the following decision:


1- Approval of the Independent High Electoral Commission contracting by direct contracting with the Iraqi Media Network Printing Press to print the final public and private voter register, the candidate’s handbook, and the voter register poster, with an exception from Article (3 / VII) of the Instructions for Implementing Government Contracts (2 of 2014).


2- The authority of the Independent High Electoral Commission to negotiate and contract directly with a reputable international company to print and prepare ballot papers and forms for the House of Representatives elections / 2021, with an exception from the instructions for implementing government contracts and the controls attached to them.


The Council of Ministers also discussed the topics on the agenda and issued the following decisions:


First / Increase the scale of the social protection subsidy starting from the beginning of the current fiscal year and proposed by the Social Protection Authority in light of the economic challenges that the country is going through that negatively affect the most vulnerable group of society, which is the category of the poor, and according to the following:


B - a family of two people 175 thousand dinars


B - a family of two individuals 200 thousand dinars


Second: Allowing the General Directorate of Evaluation and Examinations affiliated to the Ministry of Education to print and prepare examination books from outside Iraq for the sixth year of middle school exclusively, on the condition that local printers apologize for printing and processing, provided that this is an exception to the instructions for implementing government contracts (2 of 2014).


Third / Approval of the recommendation of the Ministerial Council for Energy (63 for the year 2021) according to the following:


• The Ministry of Oil / Oil Products Distribution Company continues to pay the energy receipts received from the two companies (Kar and Kiwan) until June 1, 2021, and the value of fuel and transportation in relation to the company (Kar) will continue to be paid in principle until June 1, 2021, provided that those wages are deducted from the dues of the Ministry Electricity is included in the 2021 budget.


- The government company affiliated with the relevant Ministry of Electricity bears the tax amounts owed by the Qiwan Company, and this is regulated by the contract concluded between them.


Fifth / Approval of the following:


1 - The receiving price of the fodder barley crop from my company (Between Two Rivers General for Seed Production in the Ministry of Agriculture and the Iraqi Company for Seed Production / Mixed Sector) is 300,000 dinars, only three hundred thousand dinars per ton.


2- The local sale price for the beneficiaries is (250,000 dinars), only two hundred and fifty thousand dinars per ton.


3- Setting up reception specifications according to the standards set by neighboring countries.


5- The Ministry of Finance shall pay the subsidy amounts through the Farmers Support Fund.


6- The fodder barley crop for the next season will be marketed in the local markets by the producers without the intervention of the two companies mentioned in paragraph (1) above.


Sixth / Issue the instructions of the Dhi Qar Governorate Reconstruction Fund, based on the provisions of Article 47 of the Federal Budget Law of the Republic of Iraq for the fiscal year / 2021, and Clause Three of Article 80 of the Constitution. Taking into consideration the remark of the Minister of Planning during the meeting session.


Seventh / Approval of the amendment of Paragraph 1 of Cabinet Resolution (343 of 2019), regarding a project to implement 130 schools in the marsh areas in the manner in which the disbursement takes place within the annual allocations allocated to the aforementioned project in the Federal Budget Law of 2021, and the percentages indicated in the original contract Taking into account the contrary in a contract appendix that includes the deduction percentage used in disbursing financial dues.


Eighth / Excluding the Ministry of Immigration and Displacement from the provisions of Article (3/1) except for paragraph (A) thereof, and Article (4) of the instructions for implementing the federal budget for the fiscal year / 2021, and the contracting methods indicated in the instructions for implementing government contracts (2 of 2014) amended To purchase relief materials and household items (fixed assets) and repair and maintain camps, to meet the needs of displaced families and returnees from displacement and relieve their burdens.


IX / Approval of the referral of Mr. Ali Awaid Al-Abadi, Director General of the Department of Public Arts at the Ministry of Culture, to retirement according to his request, based on the provisions of Articles 12 / Clause First, and Article 14 / First of the amended Unified Retirement Law 9 of 2014.