By Patricia Laya  and Nicolle Yapur


Venezuela said it will introduce new large-denomination bolivar notes as hyperinflation renders most bills worthless, forcing citizens to turn to the U.S. dollar for everyday transactions. 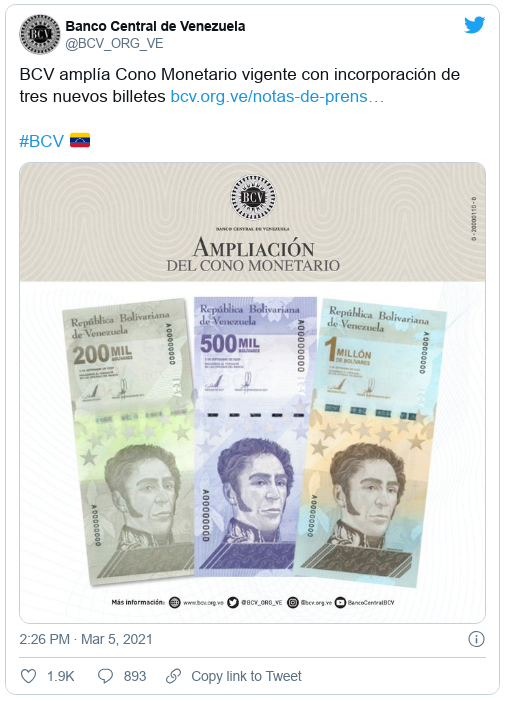 As Venezuela’s economy shrank for a seventh straight year in 2020, the government turned a blind eye to a growing number of dollar transactions, kick-started by rolling power outages that prevented credit and debit card purchases and fostered the use of cash. About 66% of transactions across the country are estimated to be made in foreign currency, according to Ecoanalitica.


While the dollar has gained ground, Venezuelans continue to rely on bolivar bills for public transportation and to purchase subsidized fuel. The Caracas subway recently issued an electronic payment system after it routinely stopped charging passengers due to cash shortages.

President Nicolas Maduro has said he plans to move to a fully digital economy this year, following three years of hyperinflation that have prompted the nation’s mint to issue higher-denomination notes that are quickly rendered all but useless. Inflation soared 3,000% in the last 12 months, according to Bloomberg News’s Cafe con Leche Index.

In October, Venezuela imported banknote paper with plans to issue a 100,000 bill that quickly became outdated. It last issued new bills in 2019, after chopping five zeros of the previous bills in circulation in 2018.

— With assistance by Alex Vasquez

Similar topics
» Venezuela RVed - Venezuela knocks three zeros off ailing currency amid hyperinflation
» How can Venezuela overcome hyperinflation?
» Venezuela's Money Is So Worthless It's Printing Bigger Bills
» Delta: "we did print currencies but that currency we did print, they're not for the government" 7/21/20
» MarkZ: "We will exchange our fiat for the new bills within that 90 days. We will be able to trade it in 1 for 1" (Oh? Then Why Change The Bills? Mark Didn't Think That Lie Through... LOL) 10/29/21