Although the pressure has eased, the bank cut its repurchase rate for the second time in six weeks on Sunday.

'The gains from revaluation will be very small. The cost you incur is that you lose the perception of currency stability,' Mohsin Khan, director of the IMF's Middle East and Central Asia department, said.

'At this point we say 'remain with the peg'. Inflation is not coming from the depreciation of the dollar. What's driving inflation in all the Gulf countries is large amounts of liquidity in the system, government spending and capacity constraints,' he said. Reuters

AFTER THE WAR; No Electricity but Kuwait Reopens Its Banks

[size=33]AFTER THE WAR; No Electricity but Kuwait Reopens Its Banks[/size] 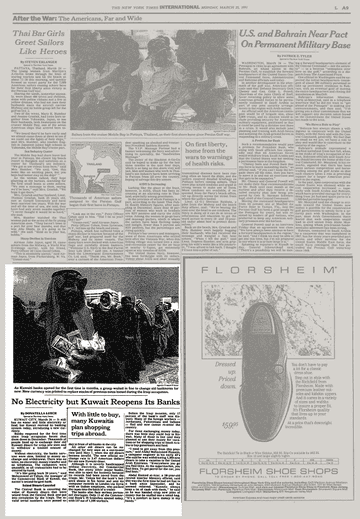 [size=14]About the Archive
This is a digitized version of an article from The Times’s print archive, before the start of online publication in 1996. To preserve these articles as they originally appeared, The Times does not alter, edit or update them.
Occasionally the digitization process introduces transcription errors or other problems; we are continuing to work to improve these archived versions.[/size]
It still has no water and little electricity or food, but Kuwait revived its banking system today, introducing a new currency.
Banks reopened for the first time since Iraqi occupation forces shut them down in December. Thousands of people lined up to exchange their old Kuwaiti dinars for crisp new ones and to withdraw a limited amount of money.
Without electricity, the banks services were slow, limited to money exchange and withdrawal. There was no telex, no electronic money transfer and no telephones. The computers were unusable, so all transactions had to be entered by hand.
"It's like going back 20 years," said Mohammed al-Yahya, the manager of the Commercial Bank of Kuwait, the nation's second-largest bank. Seized Dinars Canceled


The Central Bank is canceling the value of Kuwaiti dinars that were seized from the Central Bank and put into circulation by the Iraqis. The invalid serial numbers were posted today in front of all banks in the city.


All other old dinars can be exchanged for new ones on a one-to-one rate until May 7, when the old dinars become invalid. The new official exchange rate is 3.47 American dollars for one new Kuwaiti dinar.
Although it is severly handicapped without electricity, the Commercial Bank, like many other major banks, was able to open for business because its records had been saved from the Iraqis. Mr. Yahya hid the bank's balance sheets in his home and sent its computer records to London via Syria with an Indian employee, who packed the tapes into the back of a trailer.
The banks also face serious personnel shortages. Only 11 of the Commercial Bank's 35 branches opened today, with 137 out of 1,300 workers.
Before the Iraqi invasion, only 17 percent of the bank's staff was Kuwaiti. Many of the foreign workers -- Jordanians, Palestinians and Indians -- fled and now cannot re-enter the country.


For those exchanging money today, there was little they could buy in Kuwait. Many of those in line said they planned to use their money for vacations or for shopping trips to Saudi Arabia to buy generators and food.
"I need to get away from this pressure," said Abdul Mohammed Hussein, a computer engineer in his early 40's who said he was withdrawing 1,500 new dinars to take a vacation in the United Arab Emirates. "Everywhere you go you find lines. At the supermarket, you find lines. To get petrol for the car, you find lines."
Abdul Hamed al-Atar, a 50-year-old retired Interior Ministry official, said this was the first time he had set foot in a bank since September, and he seemed relieved. "Kuwaits always keep a lot of cash with them," he said as he was handed crisp new piles of money that he stuffed into a small bag. "It's a comfort to have money in my hands."

When Iraq invaded Kuwait in August of 1990, the value of the Kuwaiti dinar dropped to about 5 cents. In other words, it took 20 Kuwaiti dinars to buy one dollar.

In February of 1991 Iraq was expelled from Kuwait, and a month later, the banks revalued their currency to $3.47, the highest valued currency in the world. When this occurred, the New York Times reported the event on March 25, 1991.

It still has no water and little electricity or food, but Kuwait revived its banking system today, introducing a new currency.
Banks reopened for the first time since Iraqi occupation forces shut them down in December. Thousands of people lined up to exchange their old Kuwaiti dinars for crisp new ones and to withdraw a limited amount of money....
All other old dinars can be exchanged for new ones on a one-to-one rate until May 7, when the old dinars become invalid. [size=18]The new official exchange rate is 3.47 American dollars for one new Kuwaiti dinar.[/size]

At the same time, the UN put Iraq under trade sanctions, crashing the value of the Iraqi dinar (IQD) from $3.22 to about 4000 to the dollar. Their currency could only be spent in Iraq itself, and people had to carry around wads of 25,000 dinar notes to buy groceries.

Then in 2003 coalition forces invaded Iraq and overthrew Saddam Hussein. By 2004 we gave them a new currency without Saddam's picture on it. The value soon doubled and went up to 2000 to the dollar. A few years ago the Central Bank of Iraq managed to stabilize the value at 1166 per dollar.

On June 27, 2013 the UN removed Iraq from Chapter VII sanctions, allowing Iraq to regain control of close to $80 Billion in frozen funds that had been sitting in western banks since 1990. This also allowed Iraq to be reinstated on the world's banking network, as soon as they are ready. At the same time many expect to see the IQD revalued at or near its former position.

THE CENTRAL BANK SETTLES THE DOLLAR ORDER FOR THE COMING YEARS The Central Bank of Iraq decided, today, Monday, the file of the dollar exchange rate for the coming years.

Shamran stressed, "There is no harm in raising the exchange rate," explaining that "the International Monetary Fund has advised us to make the exchange 1600 dinars per dollar."

He added that "the fair value of the exchange is 2,400 dinars per dollar."

Page 1 of 1
Permissions in this forum:
You cannot reply to topics in this forum
Who is online?
In total there are 100 users online :: 1 Registered, 0 Hidden and 99 Guests :: 3 Bots