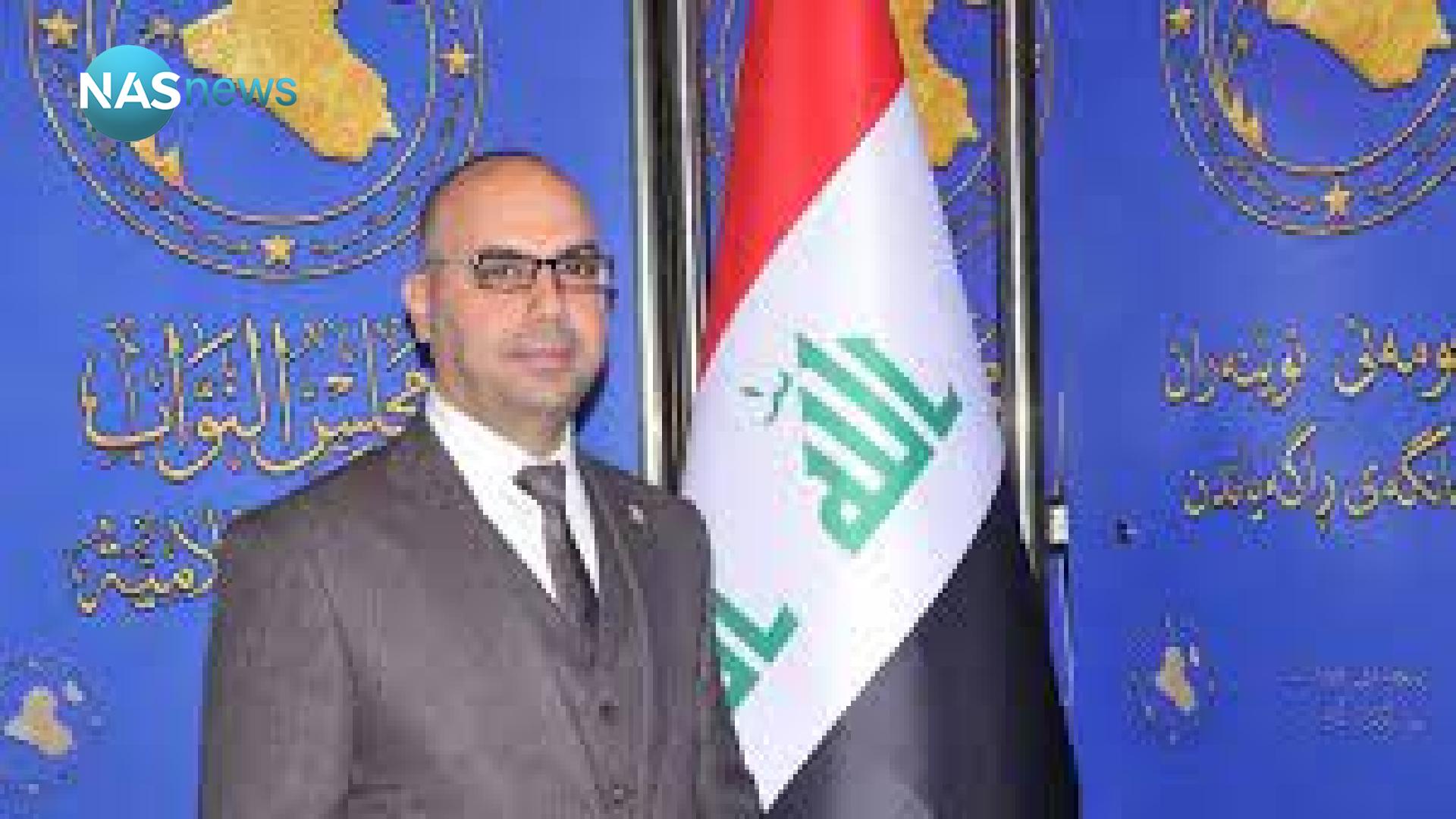 Baghdad - People
On Friday, a member of the Parliamentary Finance Committee, Majed Al-Waeli, presented an alternative proposal to impose taxes, consisting of 6 branches.

Al-Waeli said in a letter he addressed to the Minister of Finance, "People" received a copy of it (April 16, 2021), "The responsibility of the Ministry of Finance is to implement a successful financial policy that includes stabilizing the citizen's financial situation, not disrupting the life of the citizen and the employee with the issue of taxing salaries." ".
He added, "We have repeatedly asked you about ways to maximize non-oil revenues, and here are some of them who fall under the responsibility of your ministry only:"
1 / Automating outlets to control customs revenues.
2 / Automating tax collection to prevent manipulation of valuation.
3 / Abolishing tax exemptions that are exploited by partnership contracts with the public sector.
4 / Control of state real estate revenues.
5 / Apply the IFMIS financial management program to control state revenues and invest them in what is called (night investment) in international banks.
6 / Reviewing contracts for companies (Key Card and Master Card) and others.

The head of the Parliamentary Finance Committee responded, on Friday, to the Ministry of Finance's statement regarding tax withholding.
Haytham al-Jubouri said in a statement, "People" received a copy of it, (April 16, 2021), “We have reviewed the brothers’ statement at the Ministry of Finance with their support for Article 34 C of the Budget Law for the reinstatement of Law 113 of 1982 regarding the tax on the employee’s total salary, and here We would like to clarify to the brothers in the Ministry of Finance that the use of this article is inaccurate and does not give the right to what the ministry went to in its published book.
Al-Jubouri justified this by "the fact that the legislator's intention in this article is to cancel the customs and tax exemptions related to the import of goods and commodities issued by decisions of the Council of Ministers and have nothing to do with the income tax related to the employee's income or salary."

On Friday, the Ministry of Finance confirmed that its tax withholding decision does not include all categories of employees.
The ministry stated in a statement that "People" received a copy of it (April 16, 2021), that it "is working to implement all the decisions and texts contained in the 2021 General Budget Law voted by the House of Representatives, and that the book bears the signature of Finance Minister Ali Abdul Amir Allawi regarding deduction. The tax came in implementation of the provisions of Article 34, Paragraph (c) of the General Budget Law, which includes (The House of Representatives cancels all customs and tax exemptions and exemptions granted by Cabinet Resolution unless stipulated by the laws in force).
The ministry affirmed that it "applies the law in paying the tax on all income, including the nominal salary and allocations, and the exemption obtained from the Council of Ministers was exceptional."
She pointed out that "the proposed tax deduction does not include the lower classes, and the Council of Ministers has the power to cancel it."
She explained that she "was able to take steady steps through the white paper in putting the national economy on the right track, moving away from dependence on the oil resource, and banishing the specter of repeated financial shocks that the country was exposed to after the global oil price fluctuation."
The Ministry of Finance called for the country's interest to be removed from auctions and the method of mobilization that has a negative impact on everyone. The Ministry of Finance is keenly keen to ensure the right of constitutionally guaranteed employees and citizens, and no bids in that.

On Friday, the Parliamentary Finance Committee confirmed that the taxes imposed in the budget are applied retroactively.
A member of the committee, MP Abd al-Hadi al-Saadawi, told the official agency, and “people” followed him (April 16, 2021), that “taxes are calculated in the budget for a whole year starting from 1/1 and ending on December 31,” pointing out that “the general budget law Annual, so that the tax is taken retroactively. "
Al-Saadawi explained that "the federal budget comes into effect after its publication in the Iraqi newspaper Al-Waqa'i’ and the issuance of final instructions on it. "
He pointed out that "it is possible that it will come into effect at the end of Ramadan and take legal measures within ministries and agencies until they are implemented, with the exception of some articles that have been appealed to the Federal Court, which is supposed not to enter into force until a decision is reached by the Federal Court."
And he indicated that "a parliamentary bloc has challenged five articles in the 2021 budget, including the exchange rate, Article 11, guarantees and sovereign loans, and whose contracts have been canceled in the security ministries and the popular crowd," noting that "there is another article that will be challenged related to the tribal separation."
He continued, "This article was attached to the tables and not in the budget texts and everyone knows that the tables are very important, and this paragraph did not appear even to the members of the Finance Committee," noting that "there are approximately 90 billion dinars placed in the budget for the Sunni endowment for the settlement of tribal disputes between the regions that have taken place." Destroyed by ISIS. "
The General Budget Law for the year 2021 stipulated the continuation of imposing a sales tax on mobile phone and internet mobilization service at a rate of 20% and restricting its revenues as a final revenue to the public treasury. The budget also stipulated imposing a tax stamp with a lump sum amount of (25,000) dinars per person for foreign travel at all Iraqi airports. The budget also states that the Ministry of Finance must issue a tax stamp with international standards and specifications that includes imposing a tax on cigarettes and tobacco at a rate of (100)% and alcoholic and spirits at a rate of (200)%, provided that this stamp is affixed to each imported item of those items, in order to be levied from the importers of these goods, In addition to imposing a tax of (15)% on imported fuel that is sold directly through filling stations for cars, and imposing a work fee on foreign workers in Iraq in a lump sum of (1500,000) dinars annually for each worker.
On Friday, a member of the Finance Committee for the Alliance of Walkers, MP Magda Al-Tamimi, rejected what was stated in the Finance Ministry's book No. 880 in 4/13/2021 on tax deduction and the minister's recommendation to return to work with Financial Instructions No. 1 of 2007.
Al-Tamimi said in a statement, "People" received a copy of it (April 16, 2021) that it "refuses to implement the instructions referred to above, as it is not permissible for the employee to be subjected to a double reduction during a period not exceeding four months of the devaluation of the dinar against the dollar, in addition to the deduction." Tax. "

Al-Tamimi indicated that "this decision is nothing but a reflection of the confusion in the state administration and the lack of coordination between the financial and monetary policies, at a time when the value of the dinar decreased in accordance with the Central Bank decision on 20/12/2020, which we emphasized that it should be slight and gradual with steps taken The preliminary approach to this includes improving the salaries of social protection, people with disabilities and vulnerable classes, as well as improving the items of the ration in quantity and quality, while covering all months of the year while controlling prices.

Al-Tamimi stressed that "this decision would negatively affect the purchasing power and the overall lives of citizens, whether from employees or earnings and workers in the private sector, as the double reduction will affect the overall economic activities and lead to a contraction of them."

Al-Tamimi called on "the Minister of Finance to retract this decision, otherwise we will have to host him and then question him soon."


The Minister of Finance, Ali Abdul Amir Allawi, had sent a letter to the General Secretariat of the Council of Ministers to apply the tax deduction, including taxes imposed on employees of state departments. 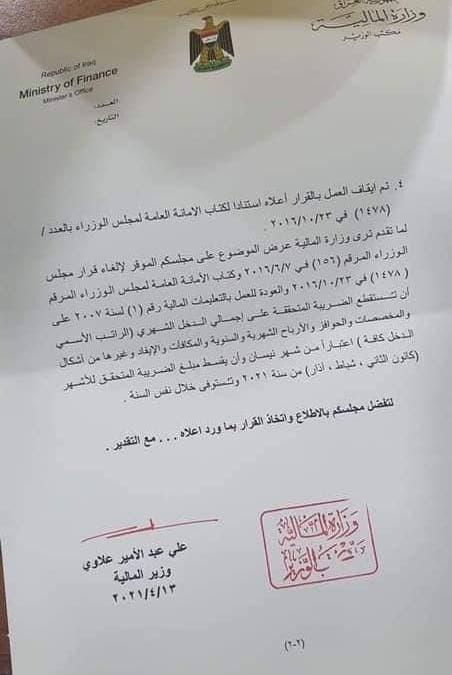 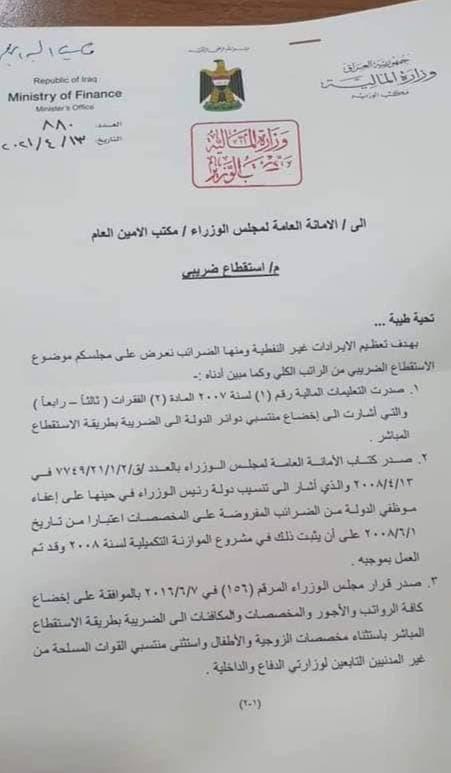