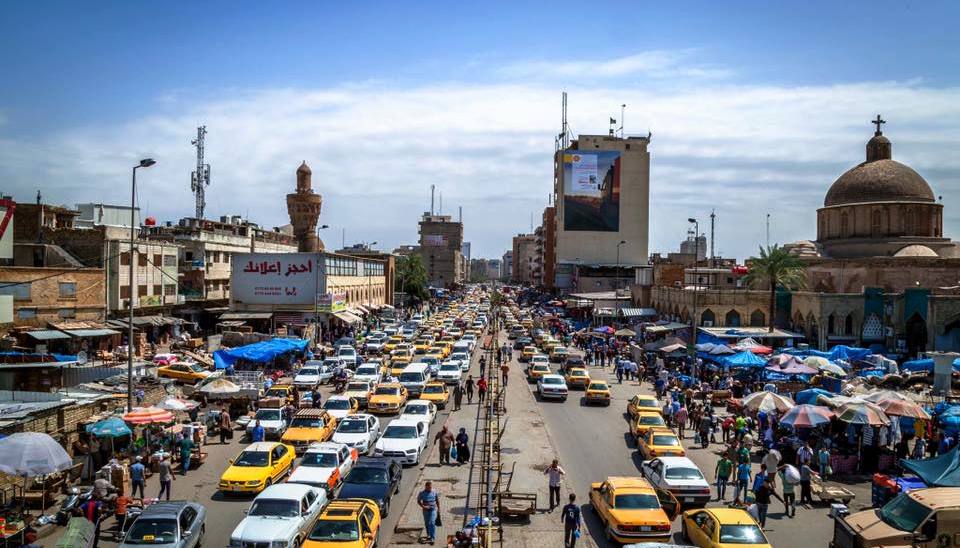 Shafaq News/ It seems that the prices of goods, especially food, will not stop rising during Ramadan after the dollar’s price reached its peak. This bitter reality prevailed the Iraqis' talks during these days of faith and increased their suffering.

The rise in goods’ prices and citizens’ inability to buy coincided with the holy month of Ramadan. As a result, some specialists called for the federal government to intervene urgently to deal with the unprecedented rise in the dollar’s exchange rate and reduce its negative effects on consumer prices.

Salaries are not enough

"People’s situations are difficult these days, and salaries are not enough in light of the high prices. Some people have no work and can hardly go through the day”, Om Zaid told Shafaq News agency.

"We came to the Shorja shopping area as, usually, goods here are way cheaper, but we are surprised to find the same prices we find in any other market. Traders take Ramadan as an opportunity for outrageous profit”, she added.

Ahmed Breesam, an employee of the Ministry of Water Resources, told Shafaq News agency, "Every year, I come to Shorja to buy basic food needs for Ramadan as it is a wholesale market with affordable prices. Yet this year is different, the prices of goods, especially rice and oil, have increased drastically”.

"Traders have already raised the prices significantly under the pretext of dollar prices. In Ramadan, they use other justifications to raise it even more. The government is doing nothing to address the matter, and the Interior Ministry’s role in this regard is very weak”, he added.

"There are three key factors in controlling price hikes, particularly food and necessity, namely, the ability to provide adequate funding for foreign trade requirements in foreign currency - which is a monetary policy business and is currently facilitated, reducing customs to the minimum within the customs policy - especially for food and necessity, and the summer agricultural season, which provides a prosperous food offering”, adviser to Prime Minister, Mudhhir Mohamed Saleh, stated to Shafaq News agency.

He also pointed out, "The meeting of the mentioned three economic factors will ensure basic materials’ prices’ stability, especially if it is combined with the ration card’s prosperity in terms of the quantities and the regularity of processing them”.

Ration card is the solution

Nada Shaker Jawdat, a member of the parliamentary economic committee, stated, "traders, in general, took advantage of the dollar price’s rise. The only victims are Iraqi people, especially the middle and poor classes of society”.

"The wrong consuming patterns are the highlight of Iraqi consumer behavior, with Iraqi citizens being the second most extravagant and wasteful Arab citizen in food, where consumption is more than the actual need", economist Dhirgham Mohammed Ali told Shafaq News agency.

He continued, "The second wrong behavior is the demand for food goods, which leads traders to raise prices. This year, Ramadan coincided with the devaluation of the dinar, and shoppers contributed to increasing low-income groups’ suffering, as prices have increased and the poor found it more difficult to meet their need for primary food”.

"Failure to correct consumption standards, be satisfied with the actual need and not rush to the markets before Ramadan, and considering the holy month a food festival will not change the greed among traders, and food prices will continue to rise", he added.

Traders: Most goods are imported

For his part, trader Mohammed Al-Hassani, told Shafaq News agency’s reporter, "The rise in goods’ prices is the result of importing them in foreign currency. Most of the food is imported from outside Iraq, and their prices increased in their original countries. The dollar was just another reason for the increase in goods’ prices”.

"Some goods maintained their prices like lentil and tomato paste, while others’ like rice, oil, and powdered milk increased drastically”, commented trader Haider Al-Marsumi.

He also pointed out, "The trader has nothing to do with the rise of prices. The manufacturing countries, as well as the dollar's price, are what control goods' prices. The rise in food prices hurts traders more than consumers because it will reduce demand on the goods".

Similar topics
» Ramadan difficult for the Iraqis .. prices are rising and livelihood scarce
» Abdul-Mahdi: I will lift the parliament request for my resignation
» OPEC prices rise to more than 61 dollars a barrel
» The financial advisor to the Prime Minister expects oil prices to improve by the summer
» Iraq .. The crisis of high food prices began to fade and the appetite for buying dollars