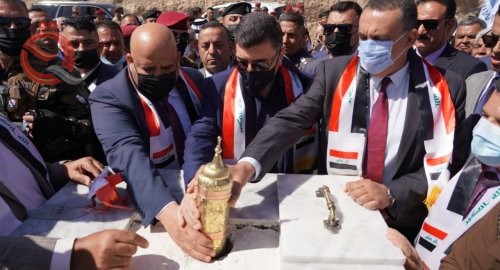 The Minister of Water Resources, Mahdi Rashid Al-Hamdani, confirmed, on Monday, that the Makhoul Dam project will provide more than 20 thousand job opportunities.

"Al-Hamdani and the governors of Kirkuk and Salah al-Din have laid the foundation stone for the implementation of the largest strategic project in Iraq after the year 2003, which is an alcoholic dam with a storage capacity of three billion cubic meters, and it will provide more than 20,000 job opportunities," the Ministry of Water Resources said in a statement received by Al-Iqtisad

News . The ministry, during the statement, "Minister Al-Hamdani, during laying the foundation stone, stated that" the project is one of the strategic projects of the ministry and will enhance water storage and revive the Iraqi economy, and it is one of the largest projects after the year 2003 and will provide more than 20 thousand job opportunities with a treasury capacity of three billion cubic meters. , Stressing that it is "the Iraq project and is one of the achievements of the Al-Kazemi government."

He added, "The project scheduled to start on the first of next May, but the initiation of it took place today, by the Ministry's companies, and foreign expertise or companies will be sought if they request that, but we depend on national competencies and experiences."

The minister explained that "specialized technical committees have been formed to work to compensate the affected people, and we will not deport anyone until after securing the appropriate place and convincing solutions and not hypothetical solutions," indicating that the project is under the supervision of the Prime Minister and the Ministry of Water Resources follows up the minister and the technical agent, and protection has been secured for him by the two operations leaders Saladin and Kirkuk. "

For his part, the governor of Kirkuk, Saeed Al-Jubouri, affirmed that "the residents of the villages that will be flooded by the dam are those who have national positions and who have made sacrifices and have suffered from terrorism and their livelihood in the agricultural sector," calling for the speedy formation of committees to compensate the affected in a satisfactory and convincing manner, stressing the importance of holding a cabinet session to consider exposing the affected. and speed. "

he called al - Jubouri , to give priority to the citizens of Kirkuk jobs that poses the province of more space and part of a wider for those affected by being constructed, which will be major and vital projects that are completed as the Iraqi government.

Governor of Salah al - Din Ammar Jabouri between the construction of a dam Makhoul has a great economic importance and will contribute To revive the agricultural sector and the national economy.