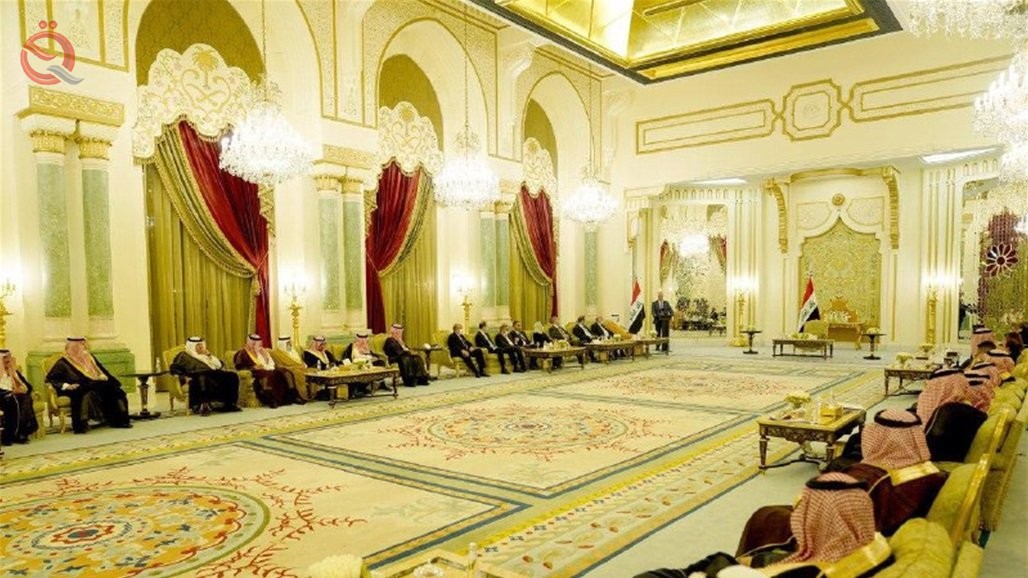 The office of Prime Minister Mustafa Al-Kazemi announced, on Thursday, the joint Iraqi-Saudi statement after the latter's visit to Saudi Arabia on Wednesday.
The statement, which was seen by Al-Eqtisad News, said that it is based on the brotherly and historical ties and ties between Iraq and Saudi Arabia and their brotherly peoples, and a desire to develop relations on solid foundations and principles, foremost among which are Arab and Islamic brotherhood, good neighborliness and common interests, and in response to the call of the Custodian of the Two Holy Mosques. King Salman bin Abdulaziz Al Saud, the Prime Minister of Iraq visited the Kingdom of Saudi Arabia on March 31, 2021. "

He added, "A session of talks was held between the Iraqi Prime Minister and Prince Muhammad bin Salman bin Abdulaziz Al Saud, Crown Prince, Deputy Prime Minister and Minister of Defense, which dealt with prospects for bilateral cooperation between the two brotherly countries and ways to enhance them in all fields.
On the level of bilateral relations, the two sides affirmed their keenness to expand bilateral cooperation in various fields and to activate the agreements and memoranda of understanding reached between the two countries, and urged the ministries and relevant authorities in the two countries to make more efforts to ensure the speedy completion and implementation of these agreements.
The two sides agreed on the following:
1- Establishing a joint Iraqi-Saudi fund, the capital of which is estimated at three billion dollars, as a contribution from the Kingdom of Saudi Arabia in promoting investment in economic fields in the Republic of Iraq, for the benefit of the Saudi and Iraqi economies, with the participation of the private sector on both sides.
2- Cooperation in the fields of energy and renewable energy and activating and accelerating the joint action plan under the umbrella of the Saudi-Iraqi Coordination Council, with the need to continue cooperation and coordination of positions in the petroleum field, within the scope of work of the Organization of Petroleum Exporting Countries (OPEC), and the agreement (OPEC +), with Full commitment to the requirements of the agreement, the compensation mechanism, and all the decisions that have been agreed upon to ensure the stability of the global oil market.
3- Completing the electrical interconnection project due to its importance for the two countries.
4- Enhancing coordination in the field of mutual support and support within the framework of multilateral diplomacy.
5- Enhancing investment opportunities for Saudi companies and inviting them to expand their activities in Iraq and in various fields, and in reconstruction efforts.
The statement pointed out that "the Republic of Iraq appreciated the participation of the Kingdom of Saudi Arabia in the Kuwait Conference for the Reconstruction of Iraq, which was held during the period 12-14 February 2018, and its pledges and contribution to it. It was agreed to coordinate between the two sides to agree on the means and aspects of the aforementioned support, as well as the initiatives that were appreciated." The Kingdom of Saudi Arabia provided it to the Republic of Iraq in the field of confronting the Corona pandemic (Covid-19).
"Bilateral agreements were signed that included (an agreement to avoid double taxation, an agreement for cooperation in the field of development planning for economic diversification and private sector development, a cooperation agreement between the Saudi Contractors Authority and the Iraqi Contractors Union for the reconstruction of Iraq, and the agreement for financing Saudi exports to Iraq)."

Al-Kazemi meets with a number of Saudi businessmen

Al-Kazemi meets with a number of Saudi businessmen 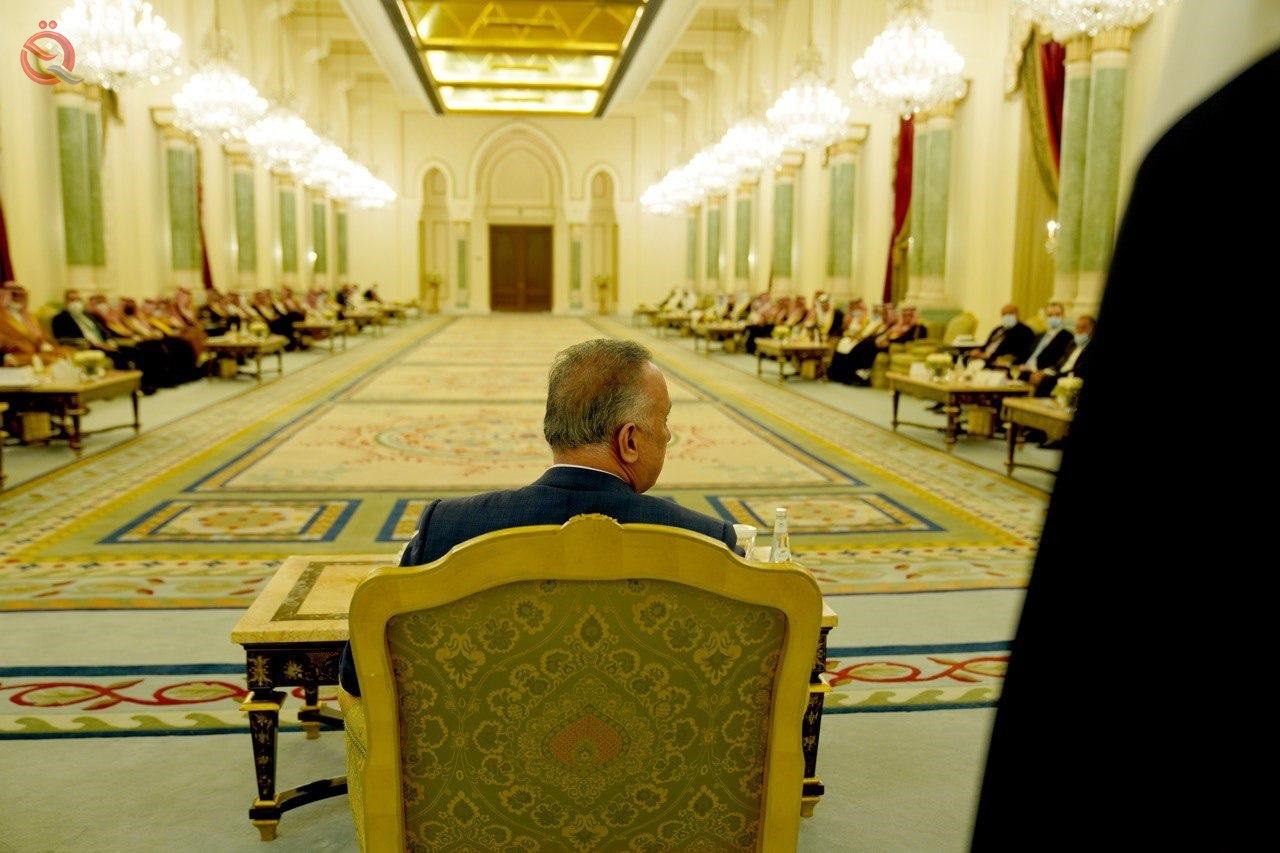 During his official visit to the Kingdom of Saudi Arabia, Prime Minister Mustafa Al-Kazemi met with a number of Saudi businessmen and heads of companies.
During his meeting with Saudi businessmen, Al-Kazemi stressed that the opportunity is ripe today to improve economic and trade relations between the two countries, and the need to invest this opportunity, indicating that there is a political will to support this in Iraq and Saudi Arabia.
He indicated that good strides have been made towards laying the right basis for economic and trade relations between the two countries, citing the opening of the Arar border crossing, nearly 30 years after its closure, the activation of the coordination council between the two parties, work on electrical interconnection, and the expansion of Saudi investments in Iraq in the fields of energy and agriculture.
The Prime Minister said that the Iraqi government attaches today great importance to developing and revitalizing the private sector, and that the recent financial crisis revealed the size of the great imbalance that could have been avoided if the state had been able to sponsor, support and develop the business environment in Iraq, and the activity of private sector companies.
He explained that the great dependence on oil made us prisoners of the fluctuations of the oil market, and facing a serious crisis, one of the causes of excessive public sector inflation and weakness of the private sector, also made us aware of the importance of structural reform of the Iraqi economy, and the expansion and support of the private sector as a real actor in development projects and in the activity of the local market, and embodied This is in the white paper prepared by the Iraqi government as a clear road map in this direction.
Al-Kazemi explained the importance of benefiting from the Saudi experience in this regard, and the Kingdom's vision towards the transition to a modern, productive economy in harmony with the technological development in the world.
Al-Kazemi stressed the Iraqi government's commitment to developing the Iraqi-Saudi partnership, and its seriousness to work to improve the investment environment in Iraq, and to overcome the difficulties facing the arrival of Saudi companies to Iraq.
He also met with the President of (ACWA Power), the CEO of (Elm), the President of Alkhorayef Group, and the CEO of Salik.

On Thursday, Finance Minister Ali Abdul Amir Allawi signed agreements with his Saudi counterpart in the field of double taxation and export financing, on the sidelines of the Saudi visit with the delegation headed by Prime Minister Mustafa Al-Kazemi and a number of ministers.
In a statement received by Al-Eqtisad News, the ministry stated, "The Minister of Finance and Chairman of the Iraqi-Saudi Coordination Council Ali Abdul Amir Allawi participated with the delegation headed by Al-Kazemi and a number of ministers and high-level personalities based on the lawsuit addressed to the Prime Minister from the Kingdom of Saudi Arabia for the purpose of strengthening relations. Bilateral relations between the two countries. "
The statement added, "In order to complete the work of the Iraqi-Saudi Coordination Council, which was held in Baghdad in January 2020, the Iraqi Minister of Finance Ali Abdul Amir Allawi signed an agreement to prevent double taxation, and the Saudi Minister of Finance signed it on the Saudi side.
The statement pointed out that "the minister signed the Saudi export financing agreement, and on the Saudi side the CEO in charge of the Saudi Fund for Development signed it, in addition to the Iraqi government signing three joint agreements and memoranda of understanding between the Iraqi and Saudi sides represented" in the field of development planning for economic diversification and private sector development, and an agreement in the field of Culture and an agreement in the field of media. "
"These steps come to complete the work of the Iraqi-Saudi Coordinating Council to support and enhance the interests of the two brotherly countries in the fields of tourism, economy, security, development and trade, which will contribute to supporting the national economy, attracting foreign investment and enhancing revenues through achieving economic development," the statement said.

Similar topics
» In a video meeting between the Crown Prince and the Iraqi Prime Minister ... a joint Saudi-Iraqi statement
» The House of Representatives completes its preparations to host the Baghdad summit of heads of parliaments of neighboring countries
» Saudi Transport Minister meets Iraqi Ambassador to discuss joint cooperation
» A high-ranking Saudi trade delegation in Baghdad to consolidate the overall rapprochement with Iraq
» Bloomberg: Iraq turns to Saudi Arabia and the International Monetary Fund to treat its ailing economy