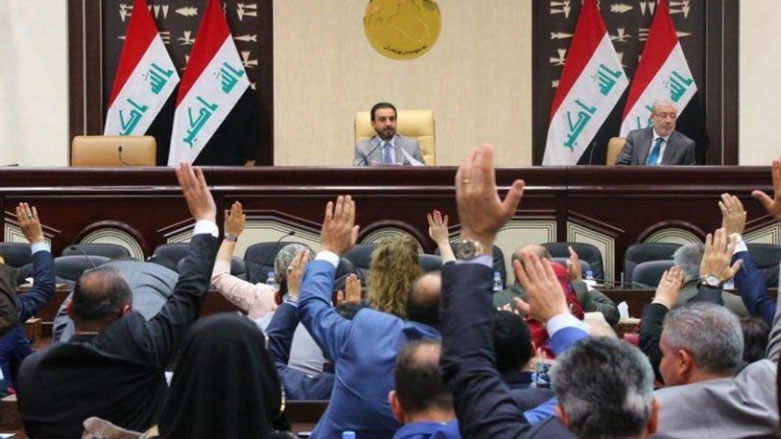 Shafaq News / Iraqi syndicates and unions announced in a joint statement their position on the federal budget law for 2021, proposing a list of solutions.

This came during a meeting of the Iraqi syndicates and unions, at the Engineers Syndicate Club, to discuss the general budget law.

They said in a statement, followed by the head of the Iraqi Bar Association, Diaa Al-Saadi, in which she clarified her vision regarding the budget, "the way this budget was prepared did not differ from the other years, as it focuses on items and not programs and objectives, which contradicts the so-called white paper."

The syndicates and unions warned of, "selling the state's assets, including real estate and agricultural lands, as this would return Iraq to the era of feudalism."

"This enables parasitic powers to seize assets that are supposed to belong to the whole Iraqi people, and make them control the fate of segments whose livelihood potential is declining daily", Al-Saadi added.

The parties denounced, "the absence of social justice that goes to imposing arbitrary taxes on the citizen to overcome the problem of the deficit in public expenditures, and to establish the privileges of specific groups, which means that the majority affected by the policies of influential forces will pay the price."

The trade unions and federations proposed solutions for the budget, summarized in nine points, including reducing the privileges of the three presidencies and special ranks, stopping the disbursement of more than one salary to anyone exempting low-income groups from taxes.

Furthermore, they stressed the need to postpone selling state assets until the approval of laws regulating the process, taking care of the country's infrastructure, and facilitating procedures for internal and external investment opportunities.

Similar topics
»  Al-Nasiri: The 2021 budget is the budget of the Iraqi people, and its submission to political conflicts is enough
» Iraqi Parliament Finally Passes 2021 Budget Bill
» Al-Halbousi: The Iraqi parliament votes on the 2021 budget law within days
» The dollar will rise against the Iraqi dinar after approving the 2021 budget: There is a "backup" plan to pay the matter, so what will happen!
» Parliamentary Finance: Voting on the budget in the absence of the Kurds is very likely