Reconstruction: A final record of the tripartite ministerial talks will be prepared

Reconstruction: A final record of the tripartite ministerial talks will be prepared 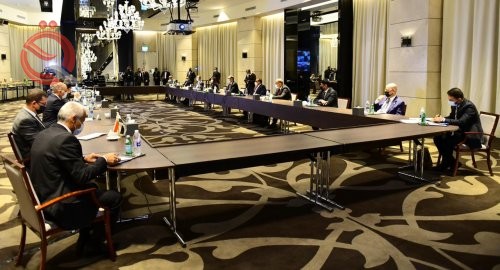 The Ministry of Construction, Housing and Public Municipalities confirmed that a final report will be prepared for the round of ministerial talks between Iraq, Jordan and Egypt.

According to the media center of the ministry in a statement received "Economy News", that " the Minister of Construction and Housing and Public Municipalities Nazanin Mohammad Su, participated in a round of official talks between the Iraqi delegations and Jordan 's presence, with the participation of the Egyptian ministerial delegation through closed - circuit television.

He added that the talks , which was launched in The Jordanian capital, Amman, affirmed the Iraqi government's desire to activate memoranda of understanding on the ground, which has witnessed tangible development and is heading towards positive steps, after it made advanced strides in the fields of commercial and industrial exchange,

noting that the Iraqi side was keen to accelerate the implementation of joint projects aimed at deepening Coordination, cooperation and strategic integration between the three sister countries in all vital sectors.

He added that the Iraqi delegation invited the technical teams from the Jordanian and Egyptian sides to visit Iraq. To view the specific sites for the establishment of projects listed in the signed memoranda of understanding.

He explained that the final report of the round of discussions will be prepared and presented to the leaders of the three countries, in order to reach the final recommendations that will be approved during the tripartite summit to be held in Baghdad.

Similar topics
» DC says, "Everyone is lined up, prepared, ready to go, and let’s pray this is the final thing. "
» Starting from Egypt .. Abdul Mahdi starts his regional tour next Saturday
» Iraq Boosts Oil Production to Record Before Talks to Cap Output
» PM Barzani: Kurdistan Region prepared for talks with Iraq on Erbil-Baghdad ties
» Bad Record Keeping, Not Corruption Behind Missing $6.6 Billion In Iraq Reconstruction Funds