A parliamentary bloc announces its boycott of the session to vote on the budget .. The reason?

A parliamentary bloc announces its boycott of the session to vote on the budget .. The reason? 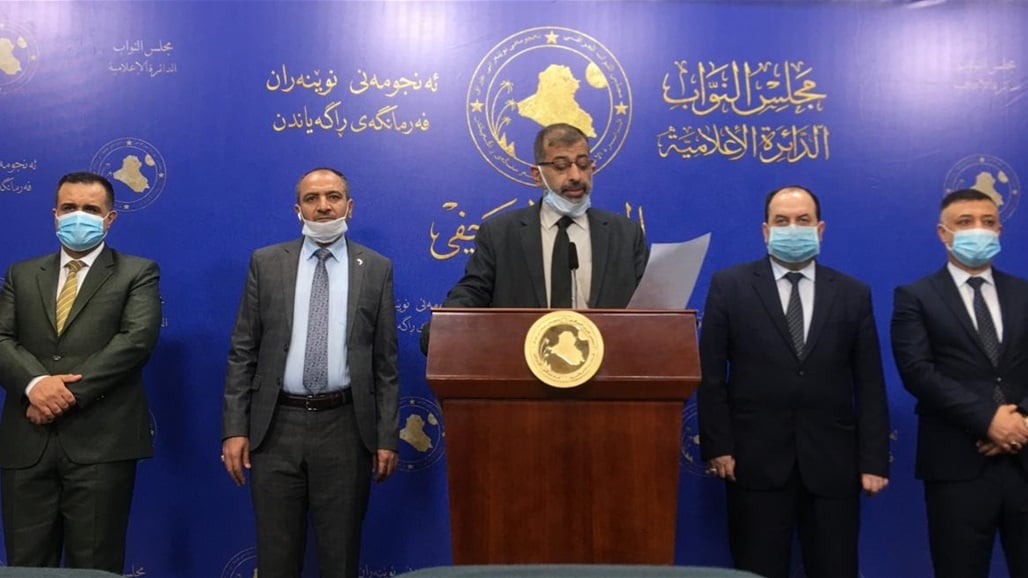 Today, Friday, the National Approach bloc announced its boycott of the budget voting session, because it included economic and social catastrophic provisions and the inequality of the central and southern governorates compared to the region.

In a statement received by Alsumaria News, the bloc said, "Because the parliament has not responded to the fundamental amendments that we demanded, therefore we announce our boycott of the vote session on the 2021 budget and hold others responsible and the consequences of it economically and socially."

The statement added: "We reiterate the most important amendments that we have proposed:
- Restoring the exchange rate to what it was previously, as the damages of this decision became clear early, and the Finance Committee suggested allocating (500) billion dinars in compensation to contractors contracting with the government for the price difference, and the first is to notice the damage to millions of Iraqis who are poor and included in the social welfare network and those with limited income, And all of these damages necessitate a return of the exchange rate to what it was previously.

- Abolishing Article (38) which permits the privatization of all productive and service sectors of the state and allows the participation of investors and contractors in ownership of oil and gas fields, power stations, Iraqi Airways aircraft and government banks.

- Abolishing articles (41 and 42) that allow the sale of state-owned agricultural lands to those who have the right to dispose of them at a value much less than its real value, and it will create widespread social conflicts.

Abolishing Article (47) that permits the sale of the state's financial assets, including industrial, infrastructure, and others.

Expanding the titles of sovereign expenditures to include (Oil MinistryTransport and water resources, and the inclusion of the security and defense sector in all its ministries and institutions, as well as the emergency reserve).

We present a proposal for the approach cluster on the articles of the region:

A- Abolishing the first paragraph of Article (11) that calculates the dues of the Kurdistan region for the previous years from 2014 to 2019 despite not having delivered the oil and non-oil revenues.

B - Paragraph Second - A of Article (11) is amended to be (the region is obligated to deliver no less than 460,000 barrels per day to a company.Sumo In the event that his production exceeds this amount, he is obligated to hand it over to the Iraqi Oil Marketing Company (Sumo).

C- Adding Article Seven of the Current Deficit Financing Law (determines the Kurdistan region’s share of the total actual spending (current expenditures and investment project expenditures) after excluding the sovereign expenditures specified in the Federal Budget Law of the Republic of Iraq for the fiscal year 2021 (and adding expenditures)Oil Ministry And theMinistry of Transportation And theMinistry of Water Resources And the inclusion of the security and defense sector in all its ministries and institutions to be included in the sovereign expenditures as well as the contingency reserve (provided that the Kurdistan region is committed to handing over at least (460) thousand barrels per day to the Iraqi Oil Marketing Company)SumoExclusively, as well as an auction on those quantities and all federal non-oil revenues, and in the event of non-commitment by the region, the expenses may not be paid to the region, and the violator of this text bears legal responsibility.

D- Paragraph III (a, b, and c) that obliges the federal authorities to pay the region’s loans and financial obligations that it entered into in the years (2014 to 2019)

- obligating the mobile phone companies to pay their fines and financial obligations within thirty days, otherwise the license is withdrawn from them and reviewing the contracts concluded with them in order to achieve the lifting of unfairness from the Iraqi state and achieve the highest economic benefit for it.

- Abolishing the salary deduction for public employees and increasing the tax on senior officials, special ranks, general managers and those of their grade.

We oppose continuing with foreign loans, as they have far-reaching effects on the country's sovereignty and economy.

- BindThe Ministry of ElectricityReviewing investment contracts for electricity production stations to ensure the lifting of injustice against the Iraqi state.

We reject the additive article that requires the Ministry of Education to invite the private sector to implement printing of textbooks, and we suggest restricting it to public state companies only.

- Rejection of the article that allows the governorates to contract with developers because they will witness secondary speculation on the one hand. Through these projects, the citizen will be charged the cost of building the health services infrastructure, electricity, water and sewage streams to increase the profits of the developers (investors) !!! .

The statement concluded by saying: "Knowing that these objections represent part of the total of forty essential requirements that are necessary to amend the 2021 budget."