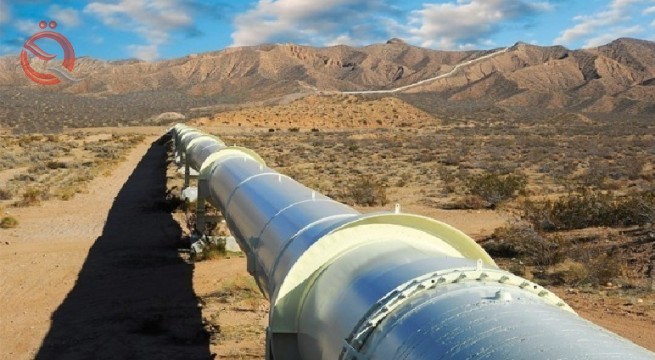 Jordan urges steps to implement a project that it considers vital, which is to extend a pipeline to transport oil from Basra, the Iraqi oil capital, to Aqaba (southern Jordan) on the Red Sea.
The project - which has been talked about for more than 33 years - its discussions entered a phase of seriousness in the past two years, during which there were meetings to arrange technical matters.
The Jordanian Prime Minister Bishr Al-Khasawneh said in a press statement last week that it is important to work to accelerate the practical steps of the strategic projects expected to be implemented.
Al-Khasawneh said that the most prominent of these projects are the two projects of the Economic City on the border between the two countries and the extension of the Iraqi oil pipeline.
He added that the project of extending the oil pipeline from Basra to Aqaba and then to Egypt would provide an export window for Iraq, and would provide Jordan with part of its oil needs, and would lead to the establishment of logistical areas and petrochemical industries in the three countries.
In conjunction with the Jordanian minister's statements, the head of the Iraqi-Jordanian Business Council, Saad Naji, said that the project is in the stage of technical designs in preparation for being put up for investment.
Naji said in a press statement that the Iraqi government has prepared a list of qualified companies for this purpose, in preparation for bidding for the project, which is of great importance to Iraq as an export port through Aqaba.
On April 9, 2013, Jordan signed an agreement with Iraq to extend a pipeline to transport Iraqi crude oil from Basra to the export ports at the port of Aqaba, at a total cost of $ 18 billion, and a pumping capacity estimated at about one million barrels per day.
In 2019, Iraq announced that it was studying a complete review of the feasibility study for the oil pipeline project with Jordan, with the aim of confirming that it achieved the highest economic benefit, so that the pipeline would be delivered to Egypt instead of ending in Aqaba.

In turn, the expert in oil affairs, Fahd Al-Fayez, said that the project contributes to securing oil for the Kingdom throughout the year, in addition to the fact that its passage through Jordan will benefit from transit fees and land rental fees.
The Jordanian expert added that the project will provide a benefit through the establishment of many parallel activities, such as contracting, transportation, employment of manpower, and the benefits that will be reaped by the communities in the areas of the line's passage.
For his part, the expert in oil affairs, Amer Al-Shobaki, said that Jordan will benefit from the project from the beginning by employing manpower on the Jordanian side, and will ensure the arrival of oil at a preferential price.
Al-Shobaki explained that if the crude is received at a preferential price, this will be reflected in the prices of the derivatives sold to the citizen, and thus it will positively affect the wheel of the Jordanian economy.
He said that a project of this size must be clear in order to ensure its continuation in light of the political storms sweeping the region.
And he indicated that the project is old, its idea has been in circulation since 1988 due to the increasing need for Iraq to have a second port to export oil, but after the Iraq war and several complications marred by the political reality, talk about it stopped.
It is noteworthy that the part of the project in Jordan will be implemented as a full investment by the Iraqi international company "Mass" to which the tender was referred earlier.
And the Ministry of Oil announced earlier this year that it had begun to deliver commercial and technical offers for the construction of the pipeline with a capacity of one million barrels per day, as it is expected that the first quarter of 2021 will witness the full transfer of the project to the implementing companies.