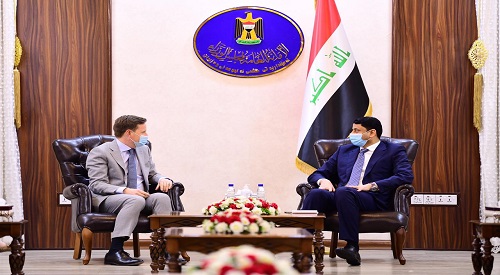 The Secretary-General of the Council of Ministers, Mr. Hamid Naim Al-Ghazi, discussed with the British Ambassador to Iraq, Mr. Stephen Hickey, the continuation of Britain and the international community in the process of supporting stabilization efforts in the liberated areas and facilitating the mechanism for the arrival of Corona virus vaccines to Iraq.

This came during their meeting today, Thursday, at the headquarters of the General Secretariat of the Council of Ministers.

The Secretary-General of the Council of Ministers praised the efforts of Britain in particular, the international community and the United Nations in general in providing support for stabilization efforts in the liberated areas, stressing the Iraqi government's determination to end the file of the displaced and close the camps through the programs it prepared for the rehabilitation of infrastructure and the implementation of service, health and educational projects, adding that The advantage of Nineveh Governorate includes all components of the Iraqi people, and the Iraqi government is serious about preserving this diversity.

The British ambassador expressed his happiness at the positive steps he saw on the part of the Iraqi government, with regard to its care to support efforts to stabilize the liberated areas and to move towards returning the displaced to their areas after his first visit to Nineveh Governorate and his meeting with local officials and citizens.

He pledged to provide the British embassy with the necessary support to the liberated areas, in coordination with the Iraqi side and the international community, as well as to facilitate special procedures for the arrival of Corona virus vaccines.


General Secretariat for the Council of Ministers
February 11, 2021