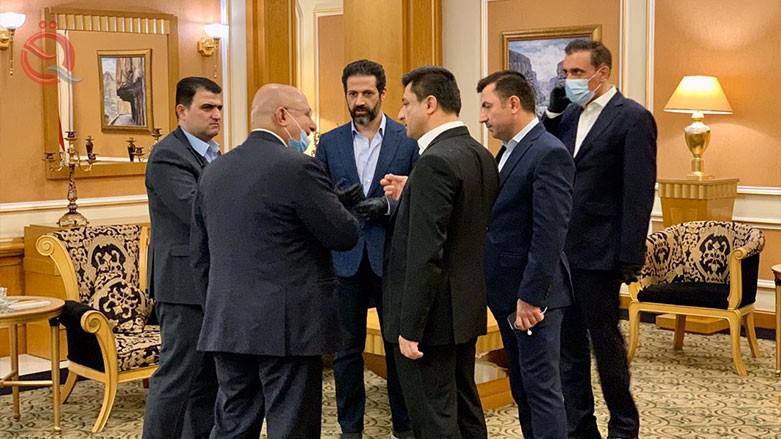 The Kurdistan Region delegation, which arrived in the capital, Baghdad late Sunday evening, discussed the developments of the financial agreement between Baghdad and Erbil.
Under the agreement between Baghdad and Erbil in the 2021 budget year , the Kurdistan Regional Government to hand over 250 thousand barrels per day to Baghdad in exchange for its stake amounting to 13.9 trillion dinars , with the settlement of dues since 2004 and until 2020, plus 50% of the revenues of the region 's non - oil,  and Calculating the price of a barrel of oil of $ 45 in the 2021 budget, the Kurdistan region will contribute to supporting the budget of oil only 5.8 trillion dinars.
On the other hand, a member of the Sulaymaniyah Provincial Council of the Patriotic Union of Kurdistan, Rika Wat Zaki, said that "in the event that no agreement is reached between the region and Baghdad regarding the oil file, a paragraph can be installed in the budget law that legitimizes the possibility of the local government in Sulaymaniyah legally And constitutional with the federal government directly. "
He cautioned that "the local government in Sulaymaniyah will be able to deliver revenues to the federal government, and in turn Baghdad will distribute salaries among the governorate's employees," adding that "this is a legal provision for one year, and the two local governments in Erbil and Dohuk can do the same."
During the meeting, the region’s delegation expressed its readiness to hand over its oil file in full to the federal government in return for the latter to pay dues to foreign companies operating in the region. However, the federal government pledged its acceptance of the oil file by rewriting contracts with oil companies.
It is hoped that this week will witness the passage of the budget bill for 2021 after resolving all points of contention between the political blocs related to the region’s share and the mechanisms for dealing with the file.
In turn, a member of the Finance Committee, Haitham al-Jubouri, revealed that the House of Representatives canceled the paragraph on payment of the debts of the Kurdistan region from the budget law for 2021.
He added that "the federal government has given authority to the Federal Office of Supervision to audit the financial accounts of the region."
Al-Jubouri stressed that the government works according to the principle that oil and gas are a wealth for all groups of the Iraqi people, noting that "the Kurdish citizen pays the price of his government's mistakes and also the weakness of the federal government in holding accountable the negligent of the regional government."
He pointed out, "The presence of a proposal from the members of the Finance Committee supports direct dealing with the provinces of the region to pay the salaries of the employees of the province, which received its returns to the federal government."

Similar topics
» Minister of Finance reveals the "in-depth" talks between Erbil and Baghdad next week on the oil of the region
» PM Barzani: Kurdistan Region prepared for talks with Iraq on Erbil-Baghdad ties
» Baghdad sent the share of the budget of the Kurdistan region in 2015
» Baghdad and Erbil talks at the beginning of the new year
» A "final round" of talks between Baghdad and Erbil on the budget