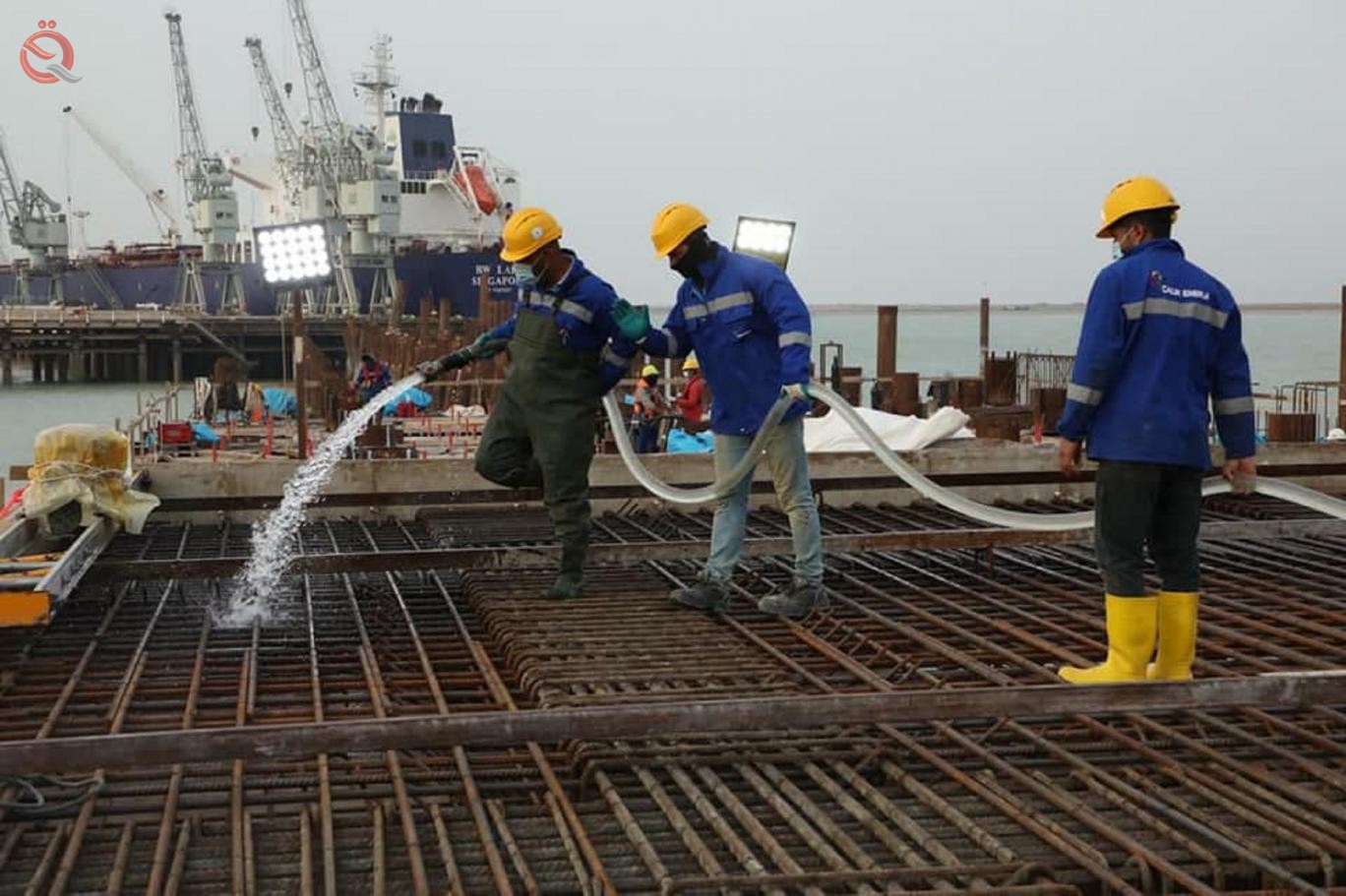 Iraq aspires to diversify its export outlets for crude oil and various oil products, through its various outlets with all neighboring countries, which appears clearly in its southern outlets overlooking the Arabian Gulf, to implement its plan, which includes increasing exports from 3 and a half million barrels to 6 million after the year 2023. .
The future plan includes several axes, the most important of which, according to the Ministry of Oil, is to increase export ports, establish 24 tanks with a capacity of 58,000 cubic meters per tank, and implement the marine pipeline project from the Faw warehouse overlooking the Iraqi coast to the oil export ports.
On the ground, what is being implemented from this plan is to convert the port of Khor Al-Zubair, which is one of the largest Iraqi ports after Umm Qasr and consists of 13 berths, into an oil port with the help of part of the project through a Japanese loan by building one of the berths in the port. And another qualification to expand Iraq's exports of various oil products.
12 oil berths
On the other hand, the Iraqi Ports Company, which is the Iraqi maritime authority responsible by law for managing all ports, regardless of their type of work, was able to convert the work of Khor Al-Zubair Port from commercial to oil, to receive small and medium ships for export and import of various oil derivatives.
Bahaa Oreibi, director of port information, said, "The company succeeded in converting 12 berths from the 13 berths of Khor Al-Zubair port into oil berths, in conjunction with a major development campaign to establish new berths."
"The advancement of the oil sector in Iraq after the year 2003, especially after the licensing round, the increase in production of oil and its derivatives and the increase in exports outside Iraq, made it necessary to have an export port," Uribe added, noting that preparing the Khor Al-Zubair port and its infrastructure helped change its jurisdiction from Commercial port to oil.
6 new berths
The Director of Ports Media clarifies that the ports signed contracts with the Petroleum Pipeline Company and the Iraqi Oil Marketing Company (SOMO), and began a development campaign on the port and its berths according to international specifications, pointing out that the development campaign consisted of building a berth in the southern region, the rate of which reached 60 percent. , Funded by a Japanese loan, with the construction of five berths by investment companies in addition to the rehabilitation of the previous berths.
Uribi explains, "The tankers that come of medium and small sizes, with depths of between eight and ten meters, and the navigation channel extending from the Khor Abdullah Canal to the Khor Al-Zubair Canal has been rehabilitated in order to enter these carriers."
Commercial decline
It seems that the transfer of the port’s jurisdiction from commercial to oil came for economic reasons, after its work in receiving commercial ships declined over the past years, and the surrounding industrial city stopped.
The head of the strategic center in Basra, Anmar Al-Safi, says, "The stopping of a number of factories near the port used to import raw materials and export their products through it, prompting the port administration to change the port’s activity towards exporting and receiving oil products through it."
Al-Safi, an expert specializing in the work of Iraqi ports, added, "This port is one of the third generation ports, near which large factories are established to facilitate the export of their products and the reception of raw materials coming through the sea," indicating that the factories established near the port, which are iron, steel and petrochemical factories, have stopped This reduced the port's imports, and required the transfer of its work to the exported and imported oil activity.
Its depths are limited
Despite the successive increase in the depths of the port, its depth is still limited, and it receives only small and medium vessels, according to Al Safi, who indicated the development of special pumping systems to be suitable for the process of converting it to this purpose, importing and exporting oil products.
Al-Safi talks about the existence of a number of berths that are still designated to receive goods of various kinds due to the proximity of the port to the city of Basra, stressing that many merchants in Basra prefer their goods to come through the port for this reason.
The Shatt al-Arab problem
The port of Khor Al-Zubair faces several technical problems, which make it difficult to export crude oil and reduce its work on exporting and importing oil derivatives.
The oil expert, Hamzah Al-Jawahiri, says that the depth of the port prompted the Iraqi authorities to transfer it from a commercial port to a port for receiving and exporting oil derivatives to small and medium ships.
Al-Jawahiri added, "The Ministry of Oil exports its crude oil through ports with great depths, such as Basra, which has an export capacity of 1.5 million tons, in addition to the floating platforms on the Gulf, through which Iraq exports most of its oil."
He explains, "Iraq has a problem in its ports, because it is located on the Shatt al-Arab, which carries a large amount of silt near the land, which leads to a lack of depths for the design capacity."
Limited capabilities
The oil expert, Kovand Sherwani, believes that the government's directive to increase financial imports pushes it to pay attention to all its outlets, especially the marine, because of the resources it achieves for the budget of the Iraqi state.
Sherwani adds, "The export capacity of Iraqi ports is less than the volume of production, and thus Iraq is trying to increase the size of its export ports, including the port of Faw and Zubair, as well as other operating ports."
Sherwani explains that the limited depth of the port of Khor Al-Zubair and the narrow sea passage through which ships head when entering, makes it difficult to use it to export crude oil, to export and import petroleum products.

Similar topics
» Iraq's Kurds Add Capacity to Oil Pipeline to Export Kirkuk Crude
» Iran suspends export of goods through border port with Iraq
» Iran to export goods to Iraq more than 387 million dollars through the port of Oran
» Kuwait Ambassador to Iraq: Kuwait opposed to any discussion regarding Port Mubarak; Iraq Foreign Minster says port belongs to Kuwait, not Iraq
» Can Iraq disengage from OPEC and export oil with its full export capabilities?

Page 1 of 1
Permissions in this forum:
You cannot reply to topics in this forum
Who is online?
In total there are 48 users online :: 0 Registered, 0 Hidden and 48 Guests :: 4 Bots