The Minister of Finance, Ali Allawi, revealed that he will soon launch a package of measures to mitigate the effects of reducing the dinar against the dollar over the next two weeks.
Allawi said, "The Ministry of Finance and within two weeks will take a package of measures that mitigate the effects of devaluation," calling for "concerted efforts to overcome the current stage and its repercussions on public life ."
The Ministry of Finance decided to change the exchange rate of the dollar in the 2021 budget, from 1182 dinars per dollar to 1450 dinars to reduce the deficit in the financial budget and be able to pay the salaries of employees.
The House of Representatives is now discussing the draft budget for the year 2021, in order to approve it, especially since the Parliamentary Finance Committee made a number of observations, as it confirmed that the financial deficit constitutes more than 44% of the total budget, which is a very large number, constituting 74 trillion dinars.

If devaluation is a well-known monetary policy instrument, what are the most common effects? Learn about the main reasons and consequences for using devaluation.

L a devaluation is described as a deliberate reduction in the value of a currency other. It is a tool used by the monetary authority or the central bank of a country or currency area.

While devaluation of a currency has certain advantages for the country concerned, such as more competitive exports in terms of prices, it is not without risk.

But what risks are we talking about? And what is the difference between a devaluation and a depreciation?

Devaluation and depreciation, are they the same thing?

Unlike devaluation, depreciation is not intentional. It refers to a fall in the value of a currency due to adverse economic developments. It results from phenomena beyond the control of the state or the monetary authority concerned.


Conversely, devaluation is a monetary policy tool that is deliberately exploited in fixed or semi-fixed exchange rate regimes . In these regimes, the exchange rate is indexed to a reference standard, composed of a currency, a basket of currencies or a commodity, such as gold for example.


In floating (or flexible) exchange rate regimes , the value of the currency concerned moves freely according to supply and demand in the foreign exchange market and intervention is limited.

What are the advantages of a devaluation?


There are many reasons for a currency devaluation. The main objective is to reduce its trade deficit by promoting its exports . Another advantage is that it sometimes leads to higher wages .

Did you know ?
In 1967, the British government decided to devalue the pound sterling, then pegged to the US dollar under the fixed exchange rate regime in effect. Harold Wilson's cabinet, initially reluctant to make the move, bowed to pressure from the UK trade deficit and poor economic performance. As a result, between 1966 and 1968, the annual growth rate had fallen from 1.6% to 5.4% and inflation had reached 4.65%.

What are the disadvantages of devaluation?

Did you know ?
During 1998, the rise in interest rates and the increase in capital outflows from Russia raised fears of a devaluation of the ruble and a default on Russian debt. In August of the same year, the stock, bond and money markets collapsed. In order to limit its effects, the government has undertaken a series of measures including the devaluation of the ruble. The result: the inflation rate reached 27.6% in 1998, then 85.7% in 1999.

Devaluation, unlike depreciation, is a voluntary drop in the value of one currency relative to others. It is a well-known monetary policy tool, but its advantages and disadvantages are sometimes overlooked.

The main advantage of devaluation is to make the exports of the country or currency area concerned more competitive, since the latter become cheaper to purchase. This can increase external demand and reduce the trade deficit. Conversely, devaluation makes imported products more expensive and stimulates inflation. Purchasing power and domestic consumption can suffer.

It is important to stress that devaluation is a technique adopted by central banks or monetary authorities of fixed or semi-fixed exchange regimes . In floating (or flexible) exchange rate regimes , these institutions tend to limit their interventions since the value of their currencies in the foreign exchange market fluctuates according to supply and demand.

Al-Mustaqila / - The economist Rasim al-Akidi said that the floating of the dollar, or what is known as the liberalization of the exchange rate, takes place through two methods, the first is pure or free, and the second is the controlled or controlled method, and in both cases the price of the dollar will rise against the Iraqi dinar and will lead to the withdrawal of a large amount of the monetary mass in Markets.

Al-Akidi added that the withdrawal of a large cash block corresponds to 4 drawbacks at the same time, and the affected population will be large segments, including the increase in prices in the markets in addition to the factories ’reluctance to produce because the value of profits will decrease in front of the costs in addition to the absorption of per capita income and the increase in rental prices. Other damages.

According to Al-Aqidi, Iraq needs an economic rescue plan that starts from maximizing non-oil revenues, which are many, and keeping the influential parties away from them, because a large part of the financial resources does not go to the state treasury, and this is part of the causes of the current financial crisis in the country.


Economists ’opinions differed on the“ floating of the dinar ”in front of the dollar exchange to face the deficit crisis in the financial budget.


The Central Bank of Iraq rejected the idea of ​​"floating the dinar" during the next stage to increase government revenues and be able to pay employees' salaries during the coming days, citing its fear of increasing prices and harming the vulnerable classes.

The estimated budget for 2020 suffers from a large deficit of 50 trillion dinars. Observers expected the deficit to rise with the oil market losing about 50% of its prices.

Finance Minister: We will take a package of measures to reduce the effects of devaluation

[size=36][rtl]Finance Minister: We will take a package of measures to reduce the effects of devaluation[/rtl][/size] 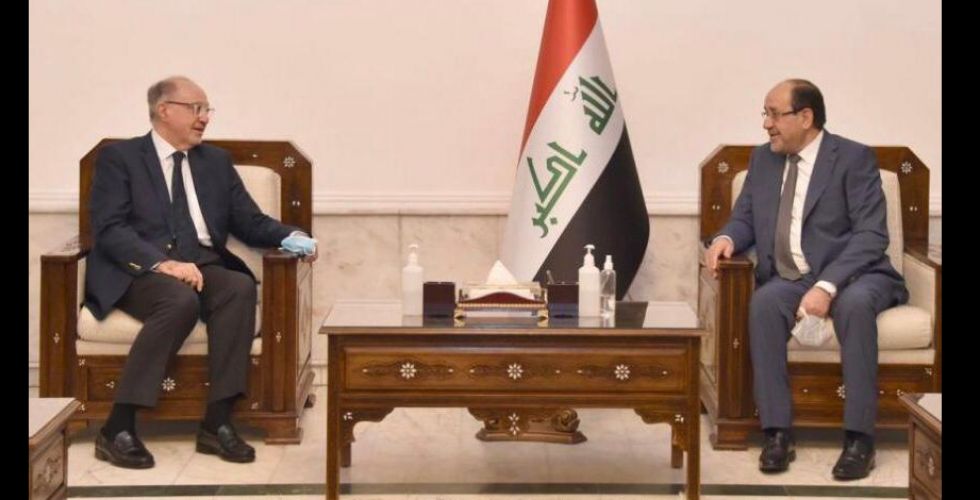 Finance Minister Ali Abdul Amir Allawi revealed the implementation of a package of measures that reduce the effects of devaluation, while the head of the State of Law coalition, Nuri al-Maliki, called for appropriate reforms that contribute to rationalizing spending.

The Minister of Finance discussed, according to a statement with Al-Maliki, the necessary means to support Iraq to confront the current financial crisis, the plans and measures required to overcome it, and the importance of uniting efforts and solidarity among all to reduce the deficit in the public budget in order to achieve social justice.

The Minister of Finance reviewed the procedures followed by the ministry in dealing with the economic and financial conditions, stressing that "the ministry will take, within two weeks, a package of measures that mitigate the effects of devaluation."

Allawi called for concerted efforts to overcome the current stage and its repercussions on public life.

For his part, Al-Maliki stressed the need for appropriate reforms that contribute to rationalizing spending and preserving public money, stating that "economic treatments to get out of the current situation should not affect the classes of limited income, employees, retirees and their pension obligations."

Similar topics
» The House of Representatives begins the new legislative session next Saturday
» The economic effects of devaluation of the currency exchange rate
» Abadi: we have taken measures to control the effects of lower oil prices
» Abadi directed to take a package of measures to control security in Baghdad
» Al-Kazemi advisor reveals the economic effects caused by the delay in approving the budget