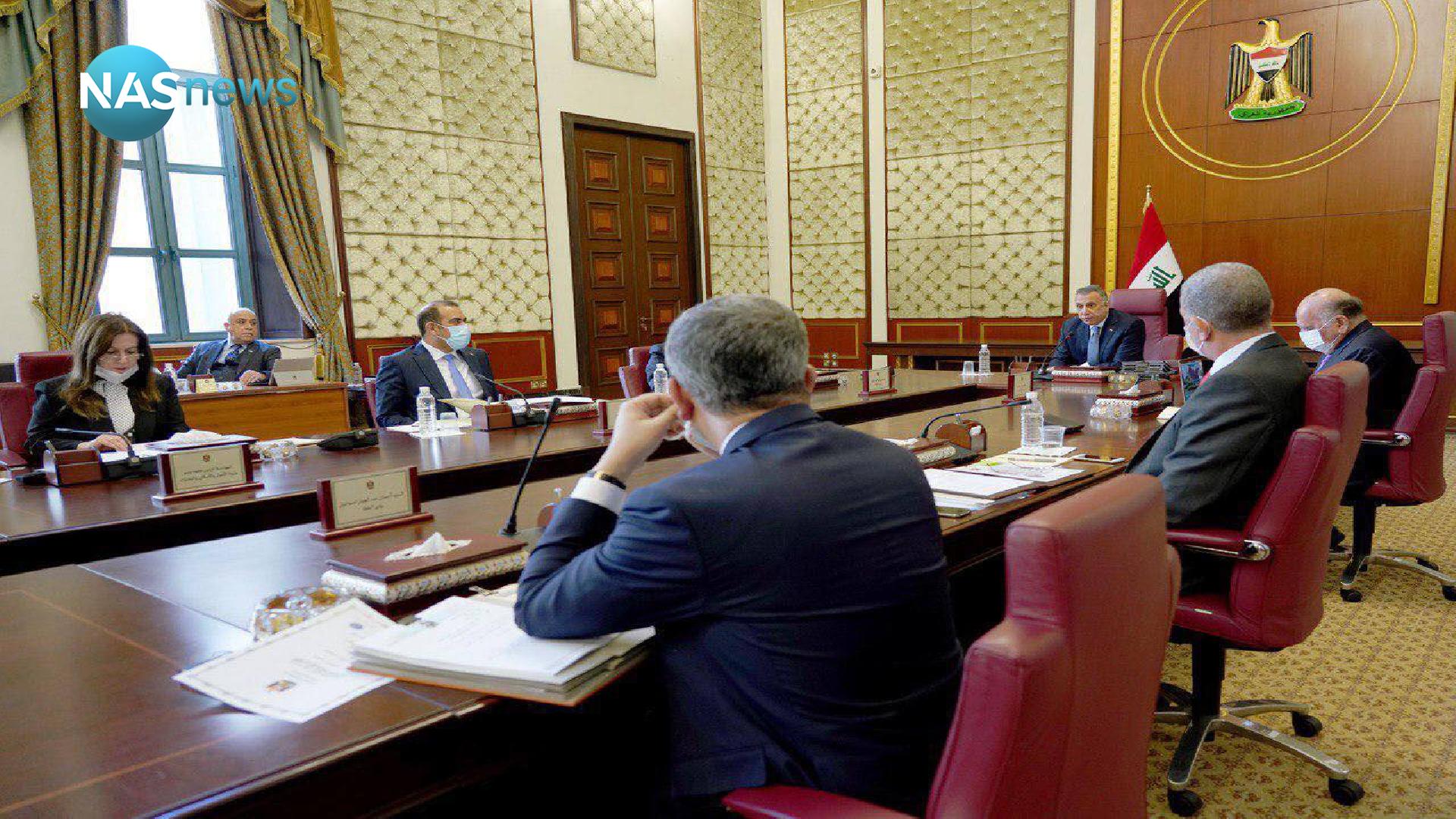 Baghdad - People
On Saturday, the Council of Ministers held its regular session under the chairmanship of Council Chairman Mustafa Al-Kazemi, during which it took several recommendations and decisions.
The Media Office of the Prime Minister’s Presidency said in a statement that “People” received a copy of it, (January 9, 2021), that “Today, Saturday, the Council of Ministers held a regular session headed by Prime Minister Mustafa Al-Kazemi, during which public affairs and developments in events were discussed, as well as topics. Included in the agenda. "
He added, "The council heard a briefing on developments in combating the Corona pandemic, and the measures that the responsible authorities continue to take and implement."
He continued, "The council also heard a presentation made by the advisor to the Prime Minister for Elections Affairs, Abdul Hussein Al-Hindawi, regarding the progress of preparations for the upcoming elections, the needs of the election commission, the cooperation of ministries and state institutions to facilitate its work, the importance of international monitoring to ensure its integrity and the importance of intensifying efforts to encourage voters to register. Biometric during the remaining period announced by the Independent High Electoral Commission.
And he stated, "The Council considered its agenda, the topics listed on it, and took a number of decisions, namely:"
Approving the recommendation of the Ministerial Council for Energy, according to what was stated in the Ministry of Electricity Book No. 511 of January 7, 2021, which included the following:
Excluding the chemicals listed in the aforementioned Ministry of Electricity book, and supplied by the Chinese CMEC company contracting with the Ministry of Electricity, in implementing the Salah al-Din Thermal Power Plant project, from issuing an import license and removing the materials from customs upon their arrival at the ports and delivering them to the aforementioned station. The import license and the required documents are to be accomplished later through the follow-up to the General Electric Power Production Company - Northern Region, with the Ministry of Trade / the Iraqi General Company for Fairs and Commercial Services, within a maximum of 60 working days, and the General Company for Electric Power Production / Northern Region bears legal responsibility In the absence of its commitment to do so.
Refer the matter to the legal department in the General Secretariat of the Council of Ministers, for the purpose of expressing an opinion on its inclusion in the agenda of the Council of Ministers, based on the provisions of Article 6 of the internal system of the Council of Ministers.
Approval of the draft law on statistics and geographic information systems, which was verified by the State Council and referred to the House of Representatives, based on the provisions of Articles 61 / Clause First and Article 80 Second of the Constitution, taking into consideration the opinion of the General Secretariat of the Council of Ministers, which is confirmed in the memorandum of the Legal Department of No. D / S / 2/2/281 LQ, dated 4/10/2020, and the remarks of the members of the Council of Ministers during the meeting session.
The companies of the Ministry of Oil pay the debts and financial dues owed by them, in favor of the companies of the Ministry of Electricity, and the matters of settlements, financial clearing and pricing of the supplied energy are considered through committees formed for this purpose and terminating their work before 4/1/2021.
Approval of the renewal of the work of Cabinet Resolution No. 277 of 2014 for an additional period of 10 years, starting from the date of this decision, provided that its content is amended according to the following:
First / The new rent amounts shall be estimated according to the importance and type of sporting origin, real estate, stadium or hall, the importance of the club, and according to professional standards.
Second / The formation of a central committee headed by the representative of the Ministry of Youth and Sports and the membership of the representative of the Real Estate Registration Department at the Ministry of Justice, and another for the State Real Estate Department in the Ministry of Finance, to determine the rental allowances in accordance with the amended Law of Sale and Rent of State Funds No. 21 of 2013.
Third / Reconsidering previous lease contracts concluded according to the aforementioned cabinet decision, in accordance with the controls mentioned in paragraphs (first and second) above.
Fourth / It is not permissible for the club and the beneficiaries to invest in the lands, buildings and properties of the Ministry of Youth and Sports that it occupies. Rather, the investment, musataha or lease shall be according to a request submitted to the Ministry above, for the purpose of organizing a fundamental contract between the two parties, provided that the lease, musataha or investment is consistent with the objectives The Ministry of Youth and Sports and its orientations, according to designs to be prepared later in line with the architectural nature of the club and the requirements of the Department of Urban Planning in the region.
The authorization of the Minister of Planning, Dr. Khaled Battal Al-Najm, the authority to negotiate and sign a draft scientific and technical cooperation agreement between the government of the Republic of Iraq and the government of the Republic of South Korea, based on the provisions of Article 80 / Article VI of the constitution.
The Ministry of Foreign Affairs prepares the necessary authorization document on behalf of the Government of the Republic of Iraq for the Minister of Planning in accordance with the approved contexts, and submits it to the General Secretariat of the Council of Ministers, in order to obtain the approval of the Prime Minister.
Approval of the continuation of the work of Cabinet Resolution 54 of 2020 by the Ministry of Immigration and Displacement in response to the needs of the displaced and returning families from displacement and to relieve their burden, until the Federal Budget Law for the fiscal year / 2021 is issued and its instructions.