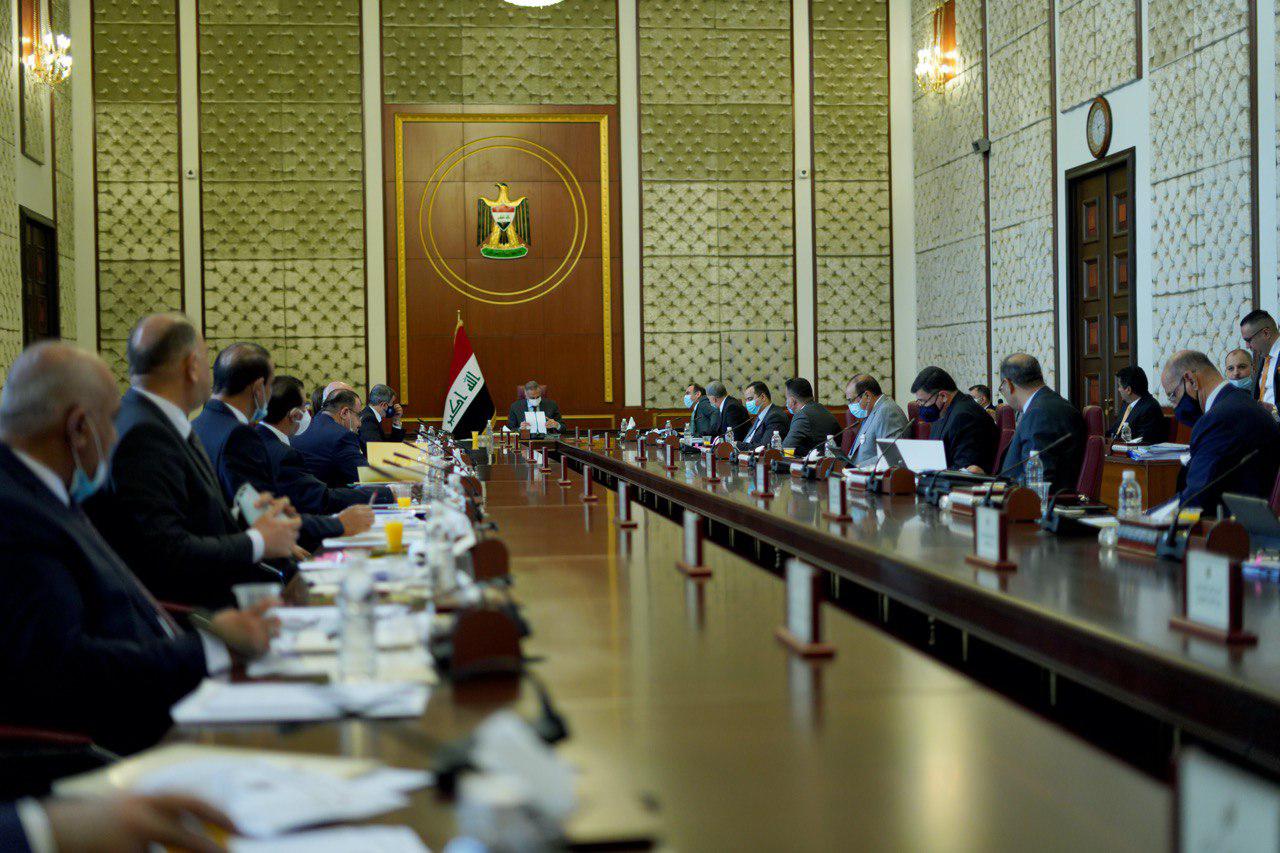 Shafaq News / The Iraqi Council of Ministers voted in its regular session, on Tuesday, on several decisions and recommendations that included the sectors of energy, health, transportation and investment.

The Media Office of the Council of Ministers stated, in a statement received by Shafaq News, that the Council held its session headed by Mustafa Al-Kazemi, during which developments of the events were discussed, in addition to discussing the topics included in its agenda.

He added that the developments of the work of the Committee to Strengthen Governmental Measures, in the fields of prevention and health control and awareness, were discussed, noting that the Minister of Health gave a detailed presentation on the governmental procedures followed to confront the Corona virus, and limit the risks of its spread.

The office indicated that the council agreed that the Ministry of Transport would proceed with the procedures of concluding a new contract with the Dutch company (Kapier) to build two ships instead of 8, at an amount of 31 million and 750 thousand dollars per vessel, and add an elevator (ELEVATOR) to each vessel.

According to the statement, the Council of Ministers authorized the General Director of the General Maritime Transport Company to sign the contract and the financial obligations resulting from that, taking into account that the Ministry of Transport and the company bear the validity of the contractual procedures and the duly referral, and negotiate with the company to reduce prices.

The Council emphasized the obligation of the contracting company to submit a formal written waiver of any rights resulting from the previous contract before signing the new contract with it, directing the Ministry of Transport to take legal measures regarding signing the previous contract before implementing Paragraph (3) of Cabinet Resolution (44 of 2013), And determine the negligent, if any, and take legal action against them.

The Council approved the renewal of the contract concluded with the Egyptian General Petroleum Corporation for the next year 2021 with the same contractual quantity of (12) million barrels of Basra Light crude oil, and the contractual terms previously applied, conditional on payment within the contractual time period, with the exception of the controls No. From the Ministry of Planning.

It also approved the approval of the renewal of the contract concluded between the North Refineries Company and the British (Aggreko Middle East) Company / United Arab Emirates branch, for the purpose of leasing self-generating stations to operate Salah al-Din refineries (1 and 2) for a period of (6) months, in the quantities, terms and obligations of the original contract itself, with an exception. Of the controls due to the circumstances of the Corona pandemic, which led to the delay of direct advocacy procedures for the purchase of energy units.

The Cabinet directed the Ministry of Electricity to find a more effective solution to reduce the recurrence of the need for rent.

The Council agreed to exclude an order to drill (22) wells in the fields of Maysan - the third meal in favor of Maysan Oil Company, from Paragraph (II / E) of Controls No. (3) attached to the instructions for implementing government contracts (2) for the year 2014.

The Council of Ministers voted to write off the amount of the acquisition of plots of land in the district of (19 Umm Asafir Sharqiya) of the municipality of Samawah, on which the university buildings of the Technical Institute / Central Euphrates Technical University, with an area of ​​(9/11478) square meters, amounting to one billion and 262 million and 679 thousand dinars, And complete the formal procedures for registration.

As well as writing off the amount of the acquisition of a plot of land in the district (6 Abu Mahar) of the municipality of Samawah, which is allocated to the Technical Institute / Central Euphrates Technical University with an area of ​​(39 dunums, 14 Ulk and 67.80 square meters), and its value of one billion, 484 million and 517 thousand dinars, and the completion of the basic procedures for registration.

It also agreed to write off the amount of the acquisition of a plot of land in the (New 20) district of the municipality of Rumaitha, with an area of ​​(2 dunums, 7 oleks, and 43.98 square meters), on which the site of the Rumaitha Institute has been built and is currently with the Appraisal Committee in the Governorate of Muthanna for evaluation, and the completion of the fundamental procedures for registration.

And the amount of the acquisition of a plot of land for the Najaf Municipal Directorate with an area of ​​(257 dunums, 13 oleks and 75 square meters), on which the Technical Institute / Central Euphrates Technical University was built, with a value of 12 billion and 877 million and 500 thousand dinars, was written off, and the fundamental procedures for registration were completed.

The office indicated that these exceptions came based on the provisions of Article (46) of the amended Federal Financial Management Law (6 of 2019), and the Cabinet Resolution (28 of 2020).

In its meeting, the Council of Ministers recommended the Iraqi Council of Representatives to withdraw the draft law on ratifying the agreement to accelerate economic cooperation and energy affairs between the government of the Republic of Iraq and the government of South Korea.

He called on the ministries of oil and electricity to coordinate with the South Korean side, to re-examine the aforementioned draft agreement, and to present an appropriate formula for it.

The council approved the provision of the ministries of defense, interior, health and water resources and their formations, and the governorates of Dhi Qar and Wasit, with gas oil, oils and gasoline, on the deadline from 1/1/2021 until March 31, 2021, after the aforementioned bodies and their formations sent an official monthly schedule of their fuel needs to the Ministry Oil.

As well as recording the financial amounts owed by the aforementioned bodies and their formations, which will be spent later upon approval of the financial allocations in the Federal Budget Law for the fiscal year / 2021.

And he agreed to the recommendation of the Ministerial Council for Social Service (37 of 2019), to proceed with the completion of the contracting procedures by the Babil Governorate with a consortium of companies (James, Mandate, Al-Jazirah, GAMA, Al-Iffad), provided that the engineering and technical supervision and follow-up process for the project is carried out by the General Directorate Water and sewage in the Ministry of Construction and Housing, Municipalities and Public Works.

The spokesman for the Council of Ministers, Hassan Nazim, announced earlier today that the council voted on a package of decisions, most of them in the economic and service field, while noting that the numbers contained in the 2021 budget are not limited to one fiscal year.