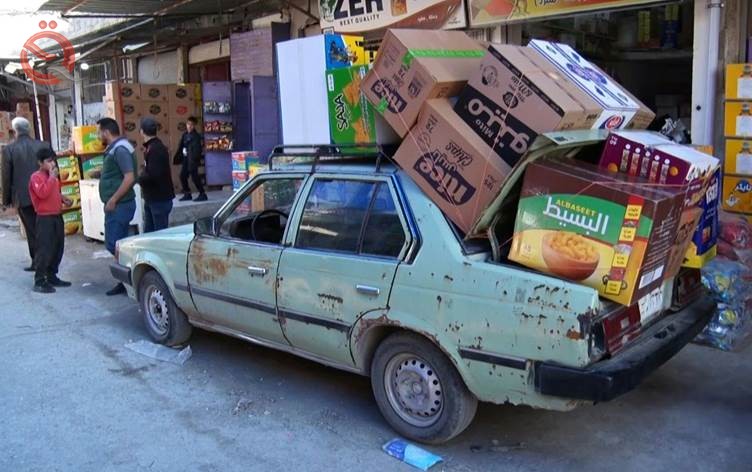 Life has returned to the wholesale stock market in the city of Mosul, which used to be a major commercial station in the Middle East. Three years have passed since the terrorist organization "ISIS" took control of the region, but there is still a need for restoration of about two hundred shops bearing the effects of the devastating battles against "ISIS" "The terrorist.
The Stock Exchange Market is located in eastern Mosul and extends over an area of ​​about two kilometers and has nearly 500 shops. Its main street and its secondary roads have been transformed into a workshop that rehabilitates the shops that were destroyed as a result of long months of battles between government forces and the terrorist "ISIS" that ended with the elimination of the latter in July 2017. .
Today, about 300 stores have restarted. Every morning, the owners open their iron doors, traffic returns at peak times, and trucks can be seen unloading huge cardboard boxes of goods here and there.
An economic researcher at the University of Mosul, Muhammad Nayef, says that the value of exchanges on the stock market before ISIS's control of the city in 2014 "ranged between 12 and 13 million dollars a month."
However, this number has now decreased to "between 8 and 10 million dollars due to city conditions and the migration of merchants and displaced persons", of whom a large part has not yet returned.
Many merchants and owners of large stores left the stock market after the military operations to find new places for their shops, whether in West Mosul or in other provinces and the Kurdistan Region, or even outside Iraq.
In the market that is returning to vibrant life, sales are on the rise, and with it the number of new jobs is increasing in a country where there are unemployed out of every five citizens, according to official figures.
Nayef expects the market to develop further and wider if the government compensates the owners of the damaged shops and homes.
Abdullah Ahmad Mahmoud (27 years) was among the first to return to the market, and the owner of the shop that sells cleaning materials says, "The market is now well received, and this is encouraged by the stability of the security situation in Mosul."
"The return of life to the market greatly contributed to the revival and reconstruction of the devastated areas surrounding it," said food merchant Obaidah Ahmed, 26, especially as he "provided many job opportunities for workers, porters, restaurant and café owners and others."
The market is surrounded by popular residential areas in eastern Mosul, which are Al-Zanjili, Sheikh Fathi, Pepsi Street, Al-Mashahida, Bab Sinjar and Al-Shifa, and life has begun to return to those neighborhoods.
The stock market was established in the early nineties, and at that time it consisted of small shops and stalls, but later it expanded to become the largest wholesale market that feeds small and sub markets in Nineveh Governorate, the third largest province in Iraq, and Mosul is its center.
The goods reach consumers through small shop owners who buy their needs from this main market. And the market was rebuilt with the potential of the shop owners
The merchant Yunus Abd Ali (50 years), who owns a food store who came to supply the goods, believes that the market has "almost recovered."
However, he believes that overcoming the effects of the war requires that "government agencies accelerate compensation for those affected in the region so that they can return to it again."
Many residents of Mosul submitted demands to the government to compensate for the damage to their homes, cars and shops, but few of them met a response within three years.
Industry in Iraq was almost completely destroyed after the US invasion in 2003. Agriculture does not represent only five percent of GDP, but it employs twenty percent of the workforce, and farmers face difficulties in promoting their goods.
The stock market gave way to farmers and industrialists to display and sell their products, after they had been struggling to transport and sell them in remote outlets.
Falah Khalaf Awaid (35 years old) says, "Opening the stock exchange stores reduced a lot of time and effort in displaying and selling our goods after we were selling them on the outskirts of Mosul."
As for the owner of the butchery, Walid Ghanem (32 years), he explains that "the opening of the market and the return of life to it solved our problems and brought us profits."
However, Ahmed Al-Shammari, a merchant, 42, points to the weakness of local production, which represents "only ten percent" of the supply. The latter is limited to "simple and handmade goods made locally, such as sponges, washing materials and brooms."
In addition to the economic crisis, Iraq suffers from the repercussions of the Covid-19 epidemic and the collapse of oil prices, which is almost its only resource.
Um Saad, 35, who supplies goods from the stock market to her food store in Ras Aljada, says that the stock market is very popular, but "the purchasing power is weak, and the salaries are delayed, which prevents people from buying."
Source: AFP

Similar topics
» VIDEO: People from Mosul long for pre-ISIS conditions to return to Iraq's second largest city
» Economist expected investment boom movement after the elimination of "Daash"
» WOW!!! YESS!!! New York Stock Exchange raises name and logo of Iraq stock market
» A stand of solidarity for the followers of the Sadrist movement in Basra in support of al-Sadr's decision to return to the elections
» Executive Director for the stock market: electronic trading contributed to a 50% increase of the market value