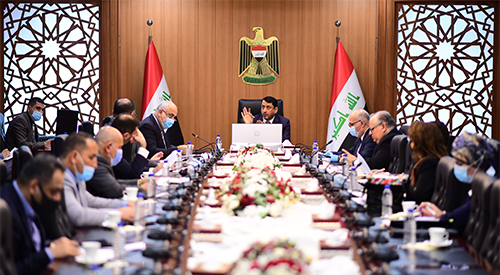 Based on the directions of the Iraqi government, to support the Iraqi economy and encourage the movement of investment and employment of manpower in Iraq.

The General Secretariat of the Council of Ministers discussed mechanisms to activate the initiative of the Central Bank of Iraq, which includes allocating an amount of (5) trillion Iraqi dinars to finance economic, commercial, agricultural, service and tourism projects .

The Secretary-General of the Council of Ministers, Mr. Hamid Naim Al-Ghazi, during his chairing the meeting of the Diwaniya Order No. (38) on project financing, confirmed that the initiative will revive the Iraqi economy during the coming period and encourage the local investment process, by investing commercial expertise in various fields that will contribute to the market movement Local and economic mobilization .

The meeting discussed the mechanisms for granting large and soft loans through government banks to establish residential, industrial, commercial, agricultural and tourism projects in all governorates and amend the final version of these mechanisms for the purpose of referring them to the Prime Minister for approval and direct implementation .

The meeting was attended by the Chairman of the Council of Advisors and the Deputy Governor of the Central Bank, in addition to the general directors of the Iraqi, Rafidain and Industrial Banks, and the Director General of the Economic Department in the National Investment Authority .

General Secretariat for the Council of Ministers
22 / November / 2020