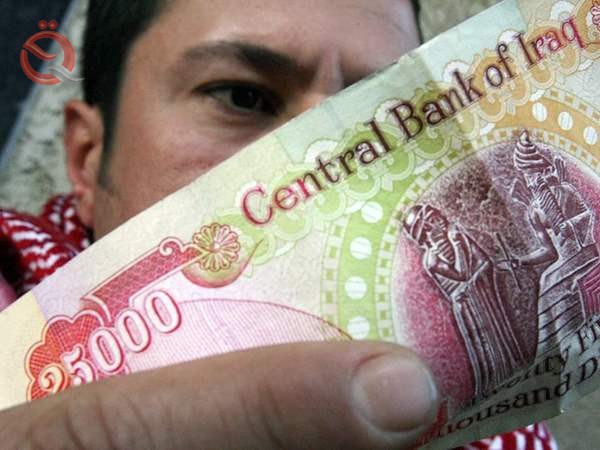 The Parliamentary Finance Committee spoke, on Saturday, about the fate of the financial crisis in Iraq and that there is no alternative to borrowing or printing currency except for one method, which will be worked on in Parliament.
Committee member Jamal Cougar said in a press statement, "The White Paper is the government's vision for reform, and that the Finance Committee has formed a sub-committee to express the House of Representatives' point of view on the necessary reforms at this stage." The merging between them begins a real reform process.
He added, "Iraq will definitely borrow again; Because his resources are not equal to his expenditures, "noting that" the government has not yet sent the draft budget, despite sending an official letter to expedite sending it in order for the House of Representatives to amend the project. "
Regarding printing the Iraqi currency, Cougar pointed out that “printing it without a financial cover will affect its strength and will be able to temporarily resolve the crisis; But after this, we will face another crisis, ”adding that“ there is no solution but reforms. ”
He added that "what arrives from the border outlets does not exceed 10% of its real resources, and that any reforms in them will provide additional double sums."
A spokesman for Prime Minister Ahmed Mulla Talal had confirmed earlier that the 2021 budget is based on the requirements of the white paper.
"The 2021 budget will be reform par excellence, and it is based on the requirements of the white paper," Mulla Talal said in a tweet on Twitter.
He added that "next year’s budget will take measures aimed directly at improving state revenues and controlling expenditures."
Where will you finance the next budget?
Earlier, the advisor to the prime minister for financial affairs, Mazhar Muhammad Salih, revealed a tendency for the federal government to borrow from citizens and use their savings to fill the financial deficit in the 2021 budget, and consider this as a public debt, instead of government banks.
Saleh said in press statements regarding the draft fiscal budget bill for the next year and their features, financing and deficit, that Iraq is going through a difficult financial situation, especially since oil export revenues constitute 50% of the "moderate" and not high revenues of the country, which has lost a lot of its resources.
And that "the budget depends on 93% of oil revenues during the past years, especially as it is committed to the decisions of OPEC to reduce production, while 2020 was a year once and" lean "on the financial policy of the country and the state that tried to secure salaries until the end of the year, adding that the year 2021 may be a year of “financial discipline” to control the operating budget, and its entries and exits in a very large way, because it absorbs about 80% of fixed expenditures.
On the financial deficit in the budget for next year, he indicated that "its financing will be from several internal and external parties, taking into account not borrowing from government banks, especially since there is an international financial alliance that has the willingness to deal with Iraq, and it will have an impact in supporting the country and providing it financially and sustaining financial momentum." And the economic "according to his perception", pointing out that "this is a very vital and important issue, especially to obtain aid and soft foreign loans."
He added that the other approach of the government in filling the deficit in the budget is to seek the help of the public and borrow from the savings they have, not from the government financial apparatus and its banks, indicating: “Yes, maybe this time borrowing from the public will be a public debt.”
He pointed out that "there is no way to fill the deficit, either by improving oil prices to obtain additional revenues or resorting to borrowing."
Saleh assured that there is "good preparation to complete the budget, and when it is presented, everything will become clear: the deficit, sources of financing and spending, and revenues, and maximizing non-oil revenues, especially since there is a" strong "trend to take his field in this regard and not by 6% or 7%, perhaps up to 25 % This is an excellent goal and step, and once that ceiling is reached by maximizing resources, there will be improvement to face the deficit, whose size is unknown, because Parliament will also work to amend it. ”It is expected that the government will present the budget to Parliament during the next few days, but this depends on the ministries defining their revenues And its operating expenses and locations - and investment in the budget.

Similar topics
» Iraq Interior announces “new security plan” in the coming days
»  Iran: Iraq We promised to open the borders in the coming days
» Follow-up cell: The government may resort to borrowing and printing currency to provide salaries
» NATO to resume Iraq training mission in coming days or weeks, top US commander says
» Abdul Mahdi: The coming days will witness the visit of important figures to Iraq