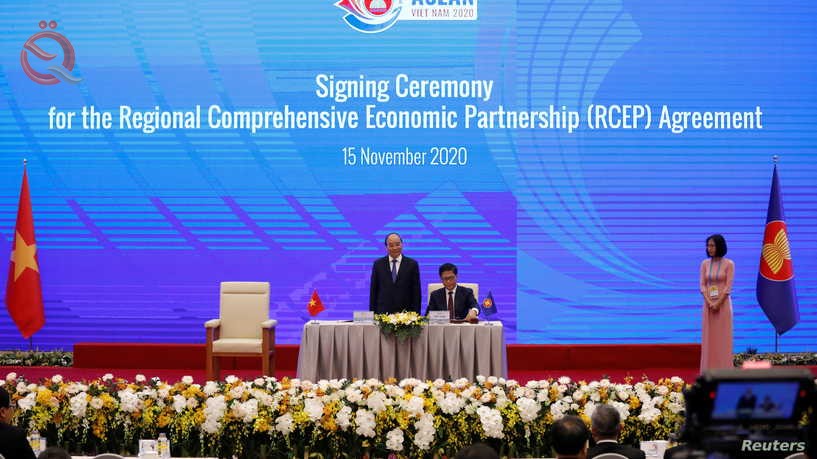 China and 14 other countries have agreed to create the largest trade bloc in the world, comprising nearly a third of economic activity, in a deal that many in Asia hope will help accelerate recovery from the shocks of the Corona epidemic.
The Regional Comprehensive Economic Partnership, or RCEP, was actually signed on Sunday 15/11/2020, on the sidelines of the annual summit of the Association of Southeast Asian Nations, which includes 10 countries.
"I am pleased to say that after eight years of hard work, as of today, we have officially reached the Regional Comprehensive Economic Partnership negotiations," said Vietnamese Prime Minister Noyn Chuan Phuc.
The pact will cut already low tariffs on trade between member states over time, and it is less comprehensive than the 11-nation Trans-Pacific Trade Agreement that President Donald Trump withdrew shortly after taking office.
Other than the 10-member Association of Southeast Asian Nations, it includes China, Japan, South Korea, Australia and New Zealand, but not the United States. Officials said the deal leaves the door open for India, which has pulled out due to strong domestic opposition to requirements to open its market, to join the bloc.
Ahead of the partnership's "special summit" meeting on Sunday, Japanese Prime Minister Yoshihide Suga said he would aggressively transfer his government's support "to expand a free and fair economic area, including the possibility of India's future return to the agreement, and he hopes for support from other countries."
Critics of the free trade agreements say they tend to encourage companies to move manufacturing jobs overseas.
The fast-growing and affluent Southeast Asia market of 650 million people has been hit hard by the epidemic and is urgently seeking new engines of growth.
The partnership would have originally encompassed around 3.6 billion people and included about a third of global trade and global GDP. With the exception of India, it still covers more than 2 billion people and nearly a third of all trade and business activities.