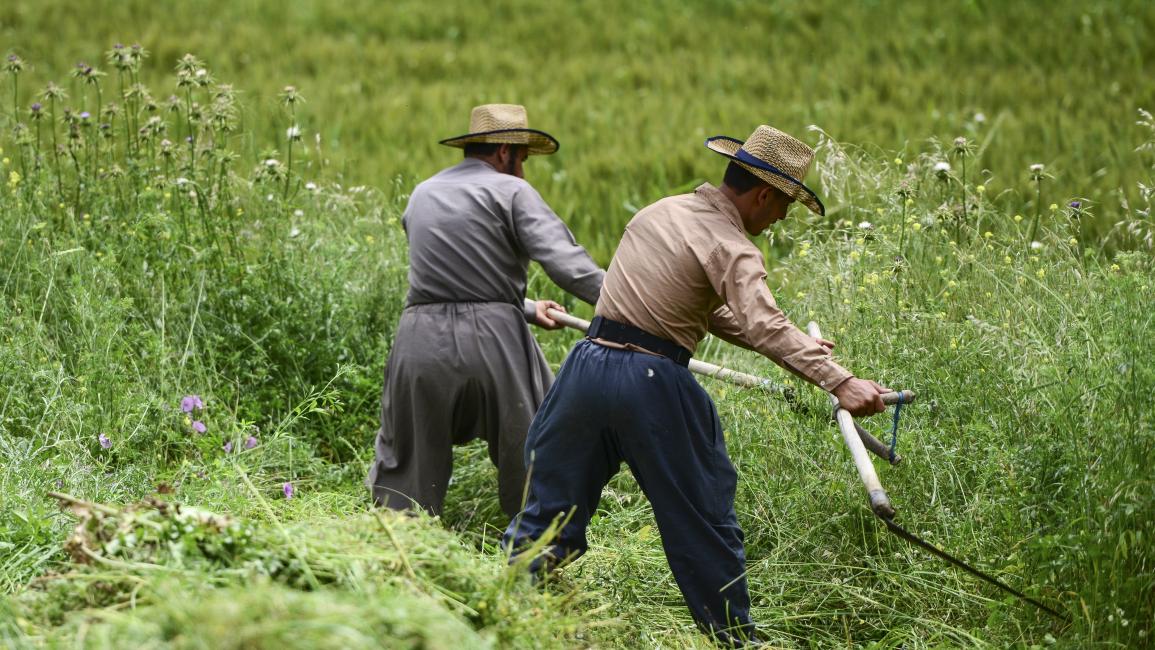 Obstacles facing government plans to develop the agricultural sector (Faraj Mahmoud / Anadolu team)
A high-ranking Iraqi official in Baghdad confirmed to Al-Arabi Al-Jadeed that plans to invest about one million hectares in the Iraqi agricultural sector in the Anbar and Samawah valleys in western and southern Iraq, which were submitted by the Saudi authorities to the Baghdad government, have been canceled for reasons that the official described as multiple.

This comes after nearly two weeks of an organized campaign led by armed militias and pro-Iranian parties in Iraq, most notably the militias of "al-Nujaba", "Asa'ib Ahl al-Haq" and "Hezbollah Brigades", as well as the "Al-Fateh" and "State of Law" alliances, Led by Hadi al-Ameri and Nuri al-Maliki, to reject the Saudi investment scheme, which aims to reclaim about one million hectares of agricultural projects, including projects of cows, livestock and dairy products. The proposed project also included planting various crops, which would provide tens of thousands of job opportunities in Iraq.

These militias considered the Saudi agricultural investment as a new colonialism, which observers described as an attempt to protect Iran's interests in Iraq, which has dominated more than 60 percent of the agricultural products in the local market for years, with total exports exceeding $ 6 billion of them annually.

The Iraqi official, who refused to be named, told Al-Arabi Al-Jadeed that the Saudi investment scheme has been canceled at the present time, whether in Anbar or Muthanna, indicating that a number of reasons led to this, including technical ones, related to the need for a permanent water source that must be Secured at least for the next ten years, which the Iraqi Ministry of Water Resources considered not possible with regard to the Tigris and Euphrates due to the decline in the levels of the two rivers due to the Turkish dams and Iranian projects on the Tigris tributaries that led to the drying of quite a few of them, and the groundwater is considered an Iraqi national water security It cannot be depleted, "he said.

The same official admitted that "accounts of a political nature have hindered other options in this huge investment, such as relying on permanent agriculture (river irrigation) or reducing the area of ​​land invested, or canceling agricultural projects that require much water consumption, as the government was subjected to a great pressure campaign from The camp close to Tehran regarding stopping the Saudi investment in this sector. "

Iraq pledges to remove obstacles to Saudi investments Last Thursday, armed groups linked to Iran issued a statement threatening to consider Saudi investments as their goal, believing that opening a new page with Saudi Arabia should be after what it called "payment of blood money", referring to the involvement of Saudi citizens with terrorist groups in Iraq during the past years. The joint statement was issued by a militia group that recently appeared on the Iraqi arena and had previously claimed responsibility for storming a number of party headquarters and satellite channels, as well as targeting diplomatic missions.

Observers believe that these groups are new arms of the Kataib Hezbollah militia and the Najba militia and other prominent groups linked to the Iranian Revolutionary Guard, such as Asaib and Al-Khorasani, which confirmed in its statement that it was agreed that any Saudi investment would be the target of the allied groups, "referring to the three groups that issued the statement Speaking of the fact that it agreed that "there is no room for Saudi investment except after compensation for the families of the martyrs of Saudi fatwa and fatwa."

The former prime minister, leader of the "State of Law" coalition, Nuri al-Maliki, one of Tehran's most prominent allies in Iraq, attacked the steps of Mustafa Al-Kazemi's government for Saudi investment in the Iraqi agricultural sector, considering it colonialism, while MPs from the "Al-Fateh" coalition attacked the political wing According to the "Popular Mobilization Forces," the Iraqi understanding to offer investment opportunities in the agricultural sector to Saudi Arabia.

Commenting on the developments, a member of the Iraqi civil movement and an activist in the popular protest movement, Ahmed Haqqi, told Al-Araby Al-Jadeed that this was expected. Hakki added that the coordinated campaign of groups affiliated with Iran was a protection of Iran's interests in Iraq at the expense of the state's interest, as the Iranians lean on what they export to Iraq of agricultural goods in exchange for ensuring that hard currency reaches them, accusing the Al-Kazemi government of being weak in front of the militias and the hegemony of the parties that lead what he called By "the deep state of Iraq."

Last week, Prime Minister Mustafa Al-Kazemi criticized the forces he did not name for attacking any rapprochement between Iraq and other countries. Al-Kazemi said on the sidelines of the weekly cabinet meeting: "There are campaigns questioning any rapprochement of Iraq with any country accompanied by rumors aimed at confusing the cards and disrupting any understanding that is in the interest of the country," referring to campaigns carried out by pro-Iranian groups against memoranda of understanding recently signed by Iraq with Cairo. And Riyadh.

Al-Kazemi indicated that the Iraqi-Saudi Coordination Council held continuous meetings during the past two days to reach a set of understandings regarding the sectors of industry, trade, agriculture, oil, education, culture and others. He stressed the need for Iraq to be an attractive environment for investment and not repellent to it, because it is in real need of investments and the provision of jobs and reconstruction.

The Iraqi government had pledged earlier to remove obstacles to the entry of Saudi investment companies into the country. This came in a meeting that Al-Kazemi held on November 8 with members of the Iraqi-Saudi Coordination Council in the capital, Baghdad, to discuss the implementation plans of the agreements signed between the two countries, according to a statement issued by the Iraqi government.

The statement stated that Al-Kazemi referred to the investment opportunities available to Saudi companies, indicating that "the government seeks to overcome all obstacles facing companies wishing to invest in Iraq." He also explained "the importance of activating some joint projects between the two countries, within the framework of the Arab League, as well as developing work in the oil market."

Iran resumes trade with Iraq and seeks to regain its share in Turkey
Saudi Arabia resumed diplomatic relations with Iraq in December 2015, after 25 years of being cut off by the Iraqi invasion of Kuwait in 1990. After decades of tension, relations began to improve, following a visit to Baghdad on February 25, 2017, by the then Saudi foreign minister. Adel Al-Jubeir.

It is scheduled that the Iraqi prime minister will start a Gulf tour, which will be the second of its kind since he was granted confidence in early May, after a European tour that included France, Britain and Germany.

According to an Iraqi official, earlier, the visit so far includes Saudi Arabia and Kuwait, and it may expand to include other Gulf countries. In statements to Al-Arabi Al-Jadeed, the official revealed that the first stop for Kazemi will be Saudi Arabia, during which he will sign a number of important economic and investment agreements in Riyadh, in addition to security and intelligence cooperation agreements.

On the other hand, Iran seeks to increase trade exchange and economic cooperation with Iraq, and Iranian President Hassan Rouhani said in statements last July that Tehran and Baghdad are seeking to increase the volume of trade exchange between the two countries to 20 billion dollars annually.

Rouhani added that he discussed with the Iraqi Prime Minister the development of trade relations between the two countries, referring to their efforts to increase the volume of trade exchange, in a move described by observers as efforts to consolidate Iranian hegemony over the Iraqi markets.