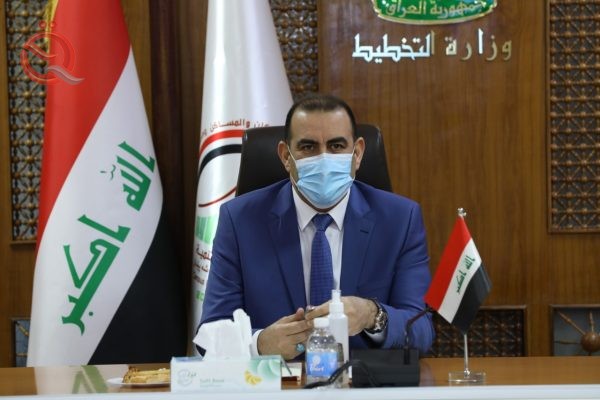 Minister of Planning Khaled Al-Najm, Chairman of the Economic, Trade and Investment Committee of the Saudi-Iraqi Coordination Council, confirmed that the recent discussions of the Saudi-Iraqi Coordination Council agreed to activate financial and banking cooperation, as a number of branches of the Central Bank of Iraq will be opened in Saudi Arabia, and other banks. The Saudi side will open banking branches in Iraq.
Al-Najm said in a press statement seen by "Al-Eqtisad News"; that the Iraqi government seeks to provide the best conditions in order to create a positive environment for Saudi investment by taking the required measures, decisions and steps, to provide such an environment, indicating that Iraq is currently reviewing the regulations, including System of partnership between the private and public sectors, which will enable more investments.
He added, "The two countries have made great progress in joint cooperation at various levels, in a way that serves their interests, politically, security, trade, investment, tourism, reconstruction and energy, and uniting efforts regarding coordination of the two countries’ position in the oil field and the relationship with OPEC and OPEC +. " The two sides also agreed on a joint work plan to start work on, and endeavor to start implementing the provisions of the Greater Arab Free Trade Area agreement bilaterally, and to form a joint business council between them.
The Iraqi Minister of Planning explained that the interest of the two leaderships had a great role in resolving many issues in the interest of raising the level of cooperation in various fields, as views were identical between the two leaders regarding the work of the Joint Coordinating Council, and providing solid ground for the work of the committees, which contributed to the success of the talks and negotiations in achieving Good results.
He pointed out that the two parties agreed to open the (Jdeidat Arar) border crossing, which will be inaugurated and operated within the next few days, and the work of the Saudi Commercial Attaché in Baghdad will soon be launched and commenced soon, in addition to continuing work to complete the requirements of a number of memoranda of understanding and bilateral agreements in a number of Of the fields, to be signed later during the Iraqi delegation's visit to Riyadh early next month.
"In the field of investment, many large Saudi companies have entered and invested in Iraq, among them the giant Aramco company, to invest in a project to collect gas, and SABIC to invest in building a petrochemical complex, and Maaden Company, to invest in the field of phosphates, fertilizers and aluminum," the Iraqi minister said. Aquabar Company to invest in a project for the electrical connection and renewable energy projects, and there are other companies specialized in the field of agricultural and manufacturing industries, ready to invest in Iraq.
He stated that the volume of trade exchange between Iraq and Saudi Arabia is still low due to many circumstances, although some stages witnessed a slight improvement, but after the great rapprochement between the two countries, the opening of the joint land border ports and the resumption of flights, the volume of trade exchange will surely witness a remarkable increase, reaching billions of dollars. Annually, compared to a few million dollars in recent years.
He pointed to many important projects and investment opportunities in Iraq, stressing that his government seeks to benefit from Saudi capabilities and expertise in completing and completing ongoing projects that face the risk of being stopped as a result of the financial crisis facing Iraq, as the Iraqi government seeks to facilitate procedures related to investment, to provide protection and guarantee For investors.
With regard to the field of energy, Al-Najm said, "Iraq is facing a bottleneck in the field of providing electric power. Therefore, joint meetings have witnessed the possibility of Saudi Arabia supplying Iraq with energy directly, or by starting to build a number of generating stations." He added, "In different regions of the country and in the field of trade exchange, the two countries exchange many exports represented in consumer goods, food industries and agricultural products, and the balance of trade exchange tends to favor the Saudi side, due to the industrial and agricultural development witnessed by the Kingdom, as for Iraqi exports. To Saudi Arabia, dates come to the fore, in addition to other products. "

Similar topics
» A high-ranking Saudi trade delegation in Baghdad to consolidate the overall rapprochement with Iraq
» The Council of Ministers holds its meeting under the chairmanship of Abdul Mahdi
» Foreign Minister: We thank the Danish government for the imminent opening of its embassy in Baghdad and the strengthening of its diplomatic representation at the ambassadorial level
» A high-level Saudi delegation arrives in Baghdad tomorrow
» Minister of Planning receives Deputy Minister of Economy and Planning